Kart Republic could hardly dream of a better start to its 2020 Karting season by taking a double victory at the WSK Champions Cup that unfolded from January 23rd to 26th on the Adria Karting Raceway. The Italian Factory brand and its satellite teams ruled two of the three classes on track with Taylor Barnard, from Rosberg Racing Academy, dominating the OK Final where Harry Thompson, the new face of the Sauber Karting Team, finished third. In OK-Junior, Alfio Spina led a full-KR podium while good progress was achieved in Mini 60. 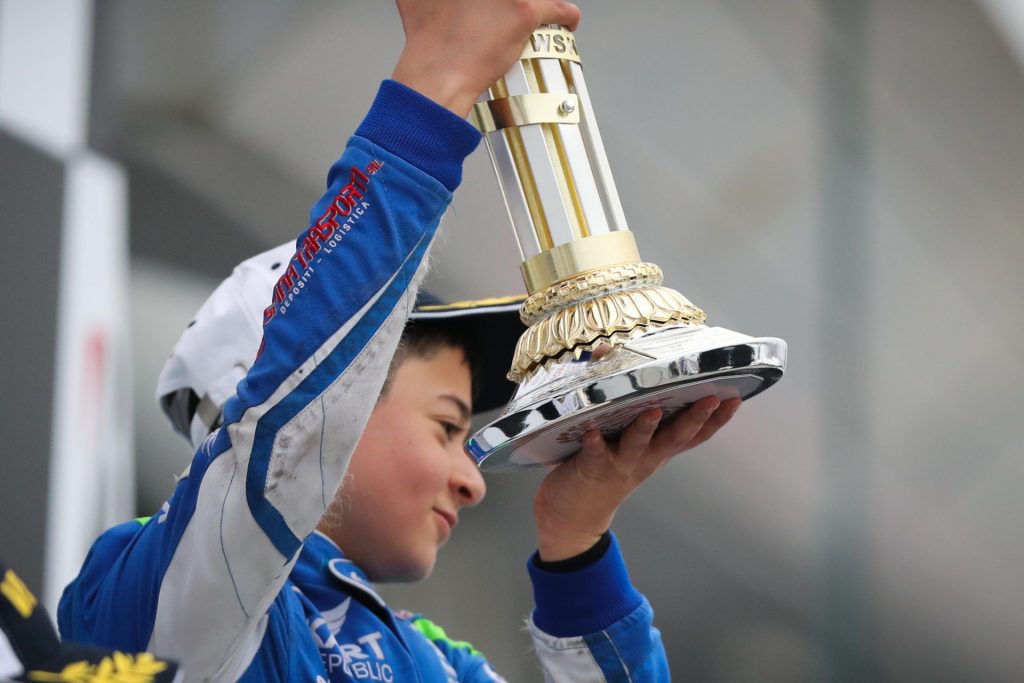 The 2020 karting season officially started last weekend for Kart Republic and its main partners entering the WSK Champions Cup on the Adria Karting Raceway. With more than 50 users in the event’s three classes, the KR brand asserted more than ever its presence and ambitions at the top of European karting, especially in OK and OK-Junior where the Italian chassis represented almost half of the field.

The OK class offered the biggest representation with 18 out of 45 participants using a Kart Republic chassis. The fastest in Qualifying and winner of his first heat, Andrea Kimi Antonelli could have been one of the main protagonists without an illness that kept him away from driving from Saturday morning. His former teammate at Rosberg Racing Academy, Taylor Barnard, took one heat victory and came second in the provisional standings before winning again in Prefinal B, which secured him the Final’s pole position.

Harry Thompson’s maiden race with the Sauber Karting Team got off to a difficult start after a mechanical issue troubled his Qualifying session. From 44th in Friday’s hierarchy, the Brit climbed to provisional sixth on Saturday night thanks to two third-place finishes in his heats. Second for a tiny gap to Barnard in Prefinal, he produced a solid final race concluded in third place.

The 20 lap-race turned into a demonstration from the Brit who took the best start from the front row and pulled away in the lead to clinch his second consecutive WSK Champions Cup victory. “It’s been a good weekend, we managed to get off to a good start in Qualifying. Kimi [Antonelli] felt ill on Friday night and couldn’t make the race, I hope he will get well soon. Thanks again to the team.”, said Barnard on the podium.

Alfio Spina (KR Motorsport) offered Kart Republic an ideal opening to its season in OK-Junior by winning the final race of a class where the KR chassis represented almost half of the entry-list. Martinius Stenshorne (Rosberg Racing Academy) and Christian Ho (Sauber Karting Team) completed a full-KR podium, which underlined the growing strength of the Italian material used by satellite partners as much as by the Factory team.

In total, five Kart Republic drivers reached the Final’s Top Ten. Besides those on the podium, the fifth place was achieved by Arvid Lindblad (KR Motorsport), provisional leader on Saturday thanks to a string of strong heat results, followed by his teammate Miron Pingasov in sixth. Brando Badoer (KR Motorsport) should have been classified seventh before a five-second penalty pushed him out of a Top Ten edged by Brazil’s Emmo Fittipaldi Jr., author of a great recovery.

Kart Republic was the second-most represented brand in Mini 60 last weekend at Adria with 16 competitors using the Italian chassis, including ten as part of Team Driver Racing Kart. The best-placed of the six qualified drivers in the Final was Mark Kastelic. The young Slovenian showed great determination in the ten lap-race by overtaking 11 rivals up to the ninth position when crossing the chequered flag.

Ambitions will logically be high for Kart Republic and its partners entering the First Round of the WSK Super Master Series to take place again on the Adria Karting Raceway from January 30th to February 2nd.