The WSK Champions Cup marked the launch of the 2020 international season in Europe. With a newly-enlarged team gathering no less than 13 drivers in the three categories, Parolin Racing Kart asserted its ambitions. Anatoly Khavalkin’s victory demonstrated the competitiveness of the new Parolin Opportunity chassis recently homologated for Mini by the CIK-FIA. 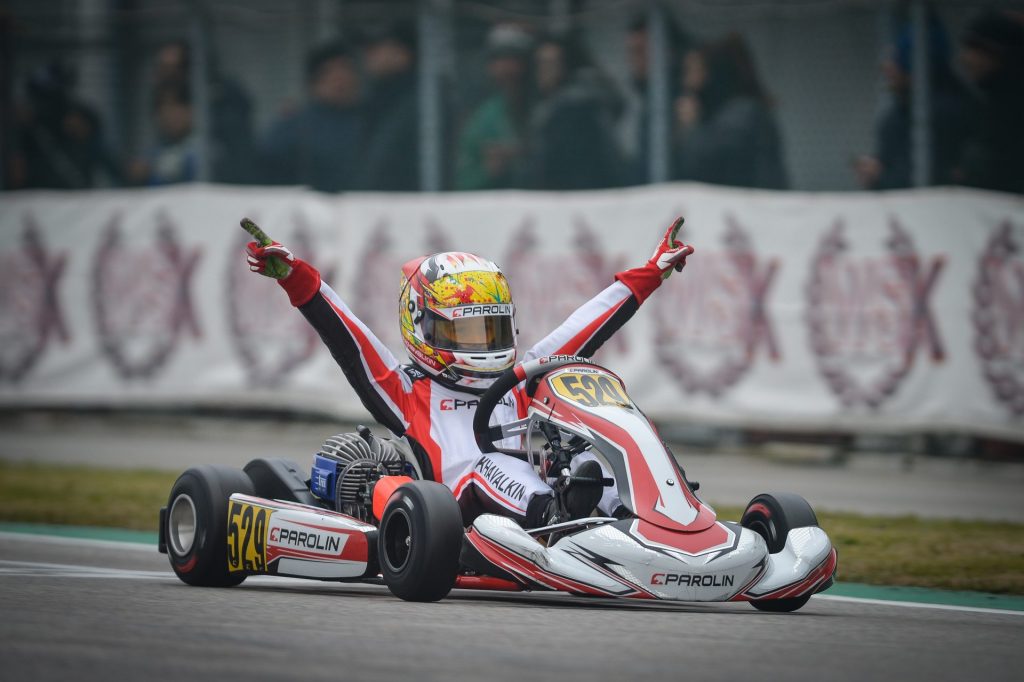 The WSK Champions Cup, which took place on the Adria Karting Raceway from 23rd to 26th January 2020 in cool weather and changing grip conditions, brought together 170 international drivers eager to compete. After the winter test sessions, this first race was the opportunity to establish an initial hierarchy for the new season, in which Parolin is one of the major players.

“It’s a great satisfaction to start the season with such good performances,” said Marco Parolin. “We have several reasons to be happy after this first meeting, which was not easy to manage given the track conditions and the intensity of the battles. Our brand is now well established in several young teams with a third of the Mini category and good progress in OK-Junior. The performances of the new Mini chassis were extremely convincing: pole position, event record, eight wins including the Final, six fastest laps in the race and five Parolins in the top seven of the Final, so the results speak for themselves! Despite some incidents during the race, the potential was there in Junior and OK too: Morgatto inspired us by regaining 34 places in the OK Final stages to finish in the top five!”

The ‘Gabriele Mini’ space is open in OK.

Despite numerous hazards on the track, the three 2020 official drivers were very competitive in the OK category. After some complicated Qualifying Practice sessions, James Wharton and Hugo Sasse fought their way back to the front. Wharton was ninth in the heats and Sasse had a superb Prefinal with the fastest time. Alas, neither of them made it to the finish of the Final. A newcomer to the team, the Brazilian Matheus Morgatto faced two retirements in the heats after posting the 11th fastest time. However, he qualified in his Prefinal despite a loose spoiler and achieved a real feat in the Final in the dry with a 21-place climb and a magnificent fifth place-finish.

Giovanni Trentin started well with a victory in the first heat, but then, like his OK-Junior teammates, he encountered a series of setbacks that did not allow any of them to achieve significant results. They are looking forward to the next meeting to resolve the situation.

Shock formation in the Mini class

Anything is possible this season with talented and motivated drivers using top equipment. Maciej Galdysz started from pole position and won three heats with the fastest lap each time. Anatoly Khavlakin confirmed his end-of-season performance by taking over the reins: victory and fastest lap in the Prefinal and a wide Final victory, so he is already at the top. Rashid Al Dhaheri, who started from 24th position, kept coming back up to finish on a magnificent Final podium. Guillaume Bouzar proved to be very combative to enter the top five of the heats. He managed to finish seventh in the Final, but lost places due to a spoiler penalty. With such sharp teammates, Dmitri Matrenin is receiving a great education for his Mini debut.

The Parolin Racing Kart team will be back in action at Adria next weekend during the first round of the WSK Super Master Series, with strong ambitions.