VDK Racing Team was back on track from January 23rd to 26th for the kick-off of its karting season at the WSK Champions Cup, run on the Adria Karting Raceway. Seven drivers made the trip to the Italian circuit with ambitions of getting 2020 off to a positive start for the Belgian team. The overall target was achieved with all entrants reaching the classes’ Finals with constant progress being made despite tricky weather and track conditions all weekend. 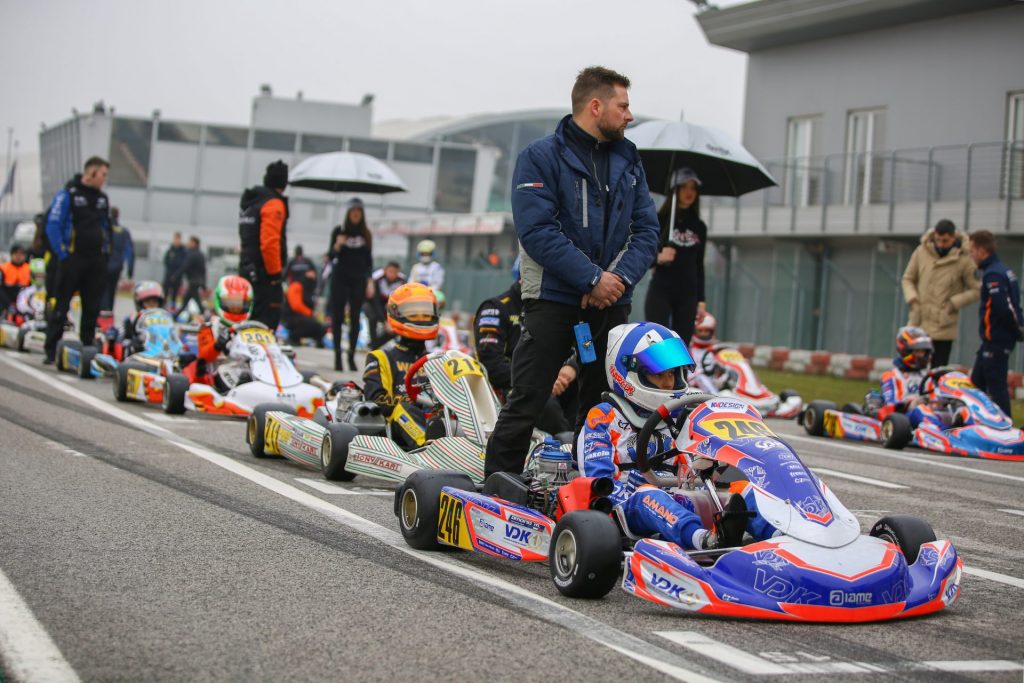 Winter break is already ancient history for VDK Racing making its official 2020 race debut at Adria’s WSK Champions Cup. Just over two months after their last appearance at the Final Cup on the same track, the team run by Eric and Alain Verdaasdonk entered seven drivers in two of the three classes on track, OK and OK-Junior, with logically-high ambitions.

As a new season begins, the Belgian team features a couple of novelties. The Kart Republic chassis, previously tested in the second half of 2019, has become the prime material used by VDK on the international scene. The team also kept their faith in IAME on the engine side and features new names in their driver line-up for FIA Karting and WSK competitions. In OK, the Frenchmen Marlon Hernandez and Florian Rousseau-Ricci join Frank Chappard and Oliver Goethe along with 2019 Junior European Champion Marcus Amand and Hugo Besson, both stepping up to the Senior class.

In OK-Junior, fresh faces are Augustin Bernier, the younger brother of Victor, winner of VDK’s last to date world title at Kristianstad in 2018, Israeli driver Ariel Elkin and the French Maxens Verbrugge, from Mini 60, alongside Brazil’s Antonio Leite, not present at Adria.

For his first race in OK, Marcus Amand gradually found his marks, evolving in the upper part of the field for most of the weekend. Ninth-fastest in his qualifying series, the young French-Finn finished twice in the Top Ten in his heats, eighth in Prefinal and crossed the Final’s finish line in 16th place, turned 13th following penalties given to some of his opponents. Franck Chappard also kicked his weekend off on the right foot with a seventh-best time in his qualifying series. Heats were more difficult for the French OK Champion whose strong sixth place contrasted with a DNF in his second race. Again sixth in Prefinal, Franck concluded his weekend with a 19th position in the Final.

Oliver Goethe fought hard in the field, knocking several times on the Top Ten’s door which he reached in his second heat as well as in Prefinal. His last weekend’s race turned into solid recovery made of fine overtaking maneuvers up to 23rd. New to the OK class, Hugo Besson concluded his Final in 27th position, unmatching his expectations despite promising pace in his qualifying heats but still, a solid season debut to build upon. Classified one rank behind, Marlon Hernandez didn’t either lack determination on track where he pulled off more than 20 successful overtaking moves over his weekend.

One of the good surprises in the Junior category at Adria was Ariel Elkin. For his first race with VDK, the Israeli took the ninth-fastest time in his qualifying series and showed great consistency by finishing fifth in of all his heats and Prefinal. Tenth on Sunday afternoon’s grid, he launched his attack on Lap 3, pulling fastest lap after fastest lap up to seventh position until halfway through the Final when a mechanical issue put an end to his podium hopes.

Likewise, Maxens Verbrugge delivered an eye-catching performance for his debut both with the team and in the category. Despite a qualifying’s outcome below his expectations, the Frenchman showed constant progress on track, making his way through the field in his heats while gaining precious experience. Qualified for the Final, he concluded his weekend by overtaking ten rivals up to a promising 22nd position.

The 2020 season of VDK Racing Team is now underway for good. Next race meeting this week with the opening round of the WSK Super Master Series, from January 30th to February 2nd again at Adria Karting Raceway.