Under the lights of Adria, Italy, the Kart Republic chassis allowed for another great story of racing to be written with not only one but two titles at the conclusion of the WSK Euro Series! 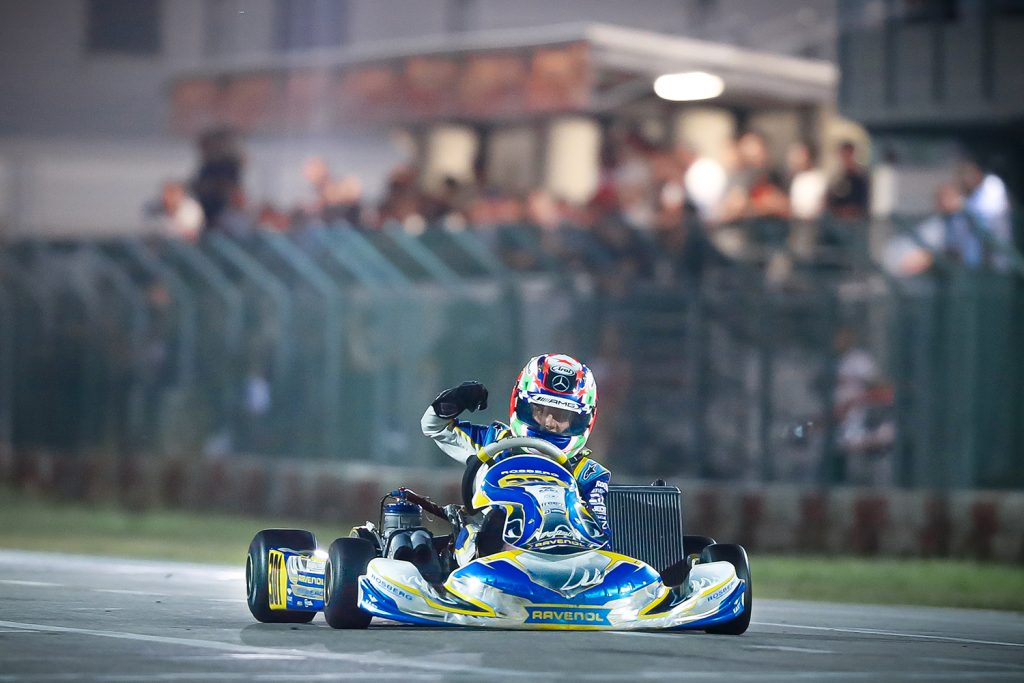 Andrea Kimi Antonelli was simply unstoppable in OK-Junior, having scored Pole position and wins in the heats. He dominated the Final and now has already two WSK trophies for his debut in the category after winning the Super Master Series earlier this season.

In OK, Lorenzo Travisanutto brought CV Performance Group to a deserved success after what had been a difficult weekend. But he’s been great at managing his position until the end, scoring enough points to win the championship.

The KR brand keeps growing and performing well also in the 60 Mini class with William Macintyre and Douwe Dedecker concluding the Competition in second and third respectively.

Andrea Kimi Antonelli (Rosberg Racing Academy): “It’s been a long and hard championship but this weekend my package, with both chassis and engine, was amazing. I would like to thank my mechanic, Giulio, Rosberg Racing Academy, and Kart Republic. Also, big thanks to my sponsors: Lucky Design, Bengio, Alpinestar and Mercedes. I’m super happy with this achievement, and I’ll try my best to also win the World Championship!”

Lorenzo Travisanutto (CV Performance Group): “It wasn’t an easy weekend for us. After a technical problem in Qualifying, I had to start from the last position in all the heats. Fortunately, I’ve been able to recover and secure enough points to win the title. Big thanks to the whole team CV Performance Group team, to Kart Republic and IAME for their incredible support!”

Jochen Schädler (CV Performance Group Team Manager): “This time, we didn’t have enough speed to win this race but scoring points was our priority to seize the title, which we did! We’re really happy about this result, also really happy about KR winning in OK-Junior too with Antonelli from Rosberg Racing Academy! We’re now looking forward to the European and World Championships, hoping to remain in the same position!”

Dino Chiesa (Kart Republic General Manager): “I don’t really have much to say about Antonelli; he simply dominated in OK-Junior and won the Championship, with a perfect weekend! I’m really pleased about the performances we can now show in OKJ. We’ve been developing new parts and solutions for this class as we seemed to be missing something at the beginning of the season. This weekend, all of our drivers have been faster: Spina, Bohra, Doods, all of them have been competitive, so I’m really happy about that! We almost won the championship also in the Mini class; Macintyre and Dedecker finished second and third with Team Driver Racing Kart. The chassis they use are KR, even though we’re currently using the Parolin homologation. We know we’re strong in OK. Travisanutto won the Championship beating Patterson, his rival for the title. Congratulations to him and big thanks to CV Performance Group for the good work they’re doing! All of our drivers were competitive in OK, including Han, Barnard, Askay; they’re all strong and capable to score podiums and win races.”

The season is yet to be over and Kart Republic has still more to achieve! Next stop: Le Mans, in France, for the last round of the FIA Karting European Championship – OK/Junior, from on 19th to 21st, with again Travisanutto and Patterson competing for the final victory!