The 2019 WSK Euro Series ended on 30th June at the Adria Karting Raceway with a semi-nocturnal event marked by very hot weather. The overwhelming competitiveness of Parolin Racing Kart since the beginning of the season was rewarded with the win for Rashid Al Dhaheri overall in 60 Mini, while Gabriele Mini’ achieved a remarkable race in OK and dominated the Final stages of the competition. 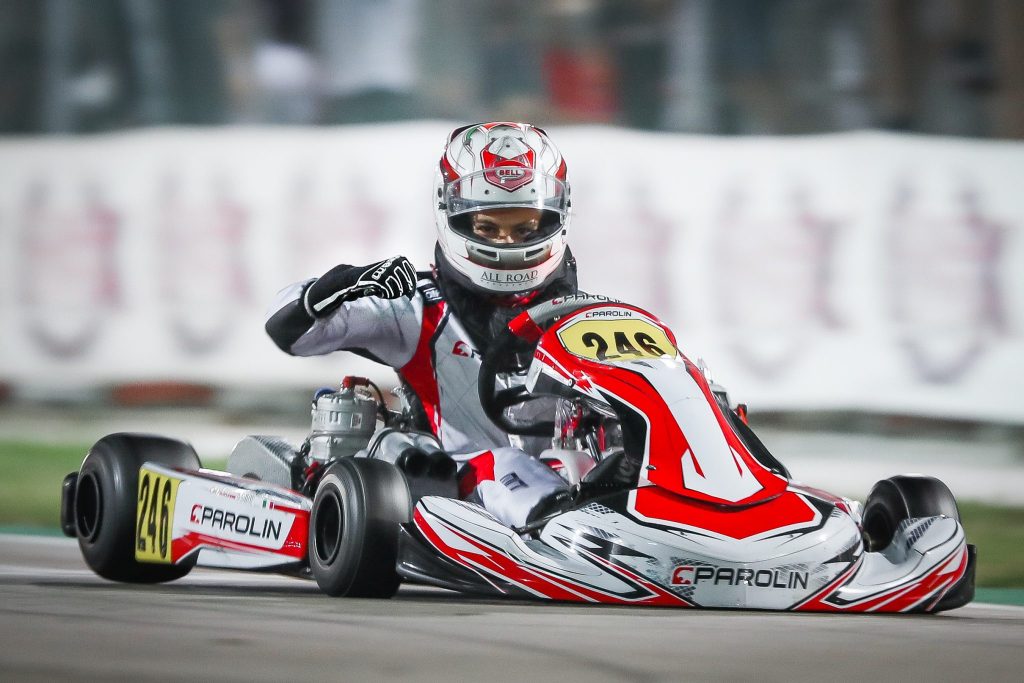 “We have many good reasons to celebrate the WSK Euro Series,” said Marco Parolin. “The quality of our chassis has been confirmed in the face of strong competition which reinforces the value of our success at Adria. Gabriele Mini’ was ahead of the rest in OK and the way he won an indisputable victory gave us a lot of joy. In 60 Mini, Rashid Al Dhaheri made a remarkable run to secure the title. Finally, the progress of Mike Van Vugt in OK-Junior is very important for our team.”

The Adria meeting took place in the heatwave with temperatures reaching 40°C at the height of the day. Fortunately, the unique timing of the event meant most of the races at night with less heat thanks to the powerful lighting of the Adria circuit.

Mini’ flies ahead of the OK category

More motivated than ever after the incident that had ousted him from the Final a few days earlier at Lonato, Gabriele Mini’ performed a real demonstration of his talent and the potential of his machine at Adria. He started by taking pole position in Qualifying and finished 2nd in the heats with relative carefulness in the fight. The Final stages would give him the opportunity to shine indisputably. Gabriele took the lead halfway through the Prefinal and won with a 2.4” lead and the fastest time. He then dominated the Final from start to finish to win with a lead of more than 2.7’’ on his opponents. He was 4th in the WSK Euro Series after his disappointment at Lonato and mounted the final podium of the ACI Karting Italian Championship. But we will especially remember his incredible level of performance in the Finals at Adria as a positive sign for the rest of the season.

Mike Van Vugt’s performance in OK-Junior shows he has great prospects in the 12-14 age group. After his 11th place in Qualifying, the young Dutchman proved very fast and reached the 5th position at the end of the heats. 5th in his Prefinal, he lost places in the scramble of the closing laps of the Final, which did not detract from the quality of his performances. The other four Junior drivers of the team also qualified for the Finals. Very fast, Brando Badoer and Matteo Rubio however had to retire due to racing incidents.

Rashid Al Dhaheri has fulfilled his mission with great intelligence. 5th fastest in Qualifying among the 76 entries, he took the lead in the category by winning three heats out of four. He then showed some caution in the Final stages while remaining very fast. In particular, he ensured the 2nd place in the Final by minimizing the risks to establish himself as the undisputed leader of the WSK Euro Series. Qualifying Practice at night with one or two quick laps at maximum had baffled many drivers.

Starting 27th after Qualifying, Keanu Al Azhari made a superb return to 6th place in the Final. Maxens Verbrugge also came back and managed to qualify to fight in the top 20 of the Final.

Again well represented, the Parolin chassis won five heats as well as five fastest laps in the race before monopolizing the top three places in the Final ranking of the WSK Euro Series.

The Parolin Racing Team is now turning to the preparation for the Final meeting of the FIA Karting European Championship – OK & OK-Junior which will take place at Le Mans (FRA) from 19th to 21st July as well as the preparatory FFSA Karting competition scheduled two weeks earlier.