The 2020 IAME Euro Series reached its conclusion from October 9th to 11th on the Karting des Fagnes of Mariembourg, in Belgium. Elie Goldstein became the third different winner in Senior, where Guy Cunnington was awarded the title, Aaron Walker claimed both the Junior Final and crown, while Sacha Van’t Pad Bosch took his first Mini victory ahead of the new class winner Cathal Clark! 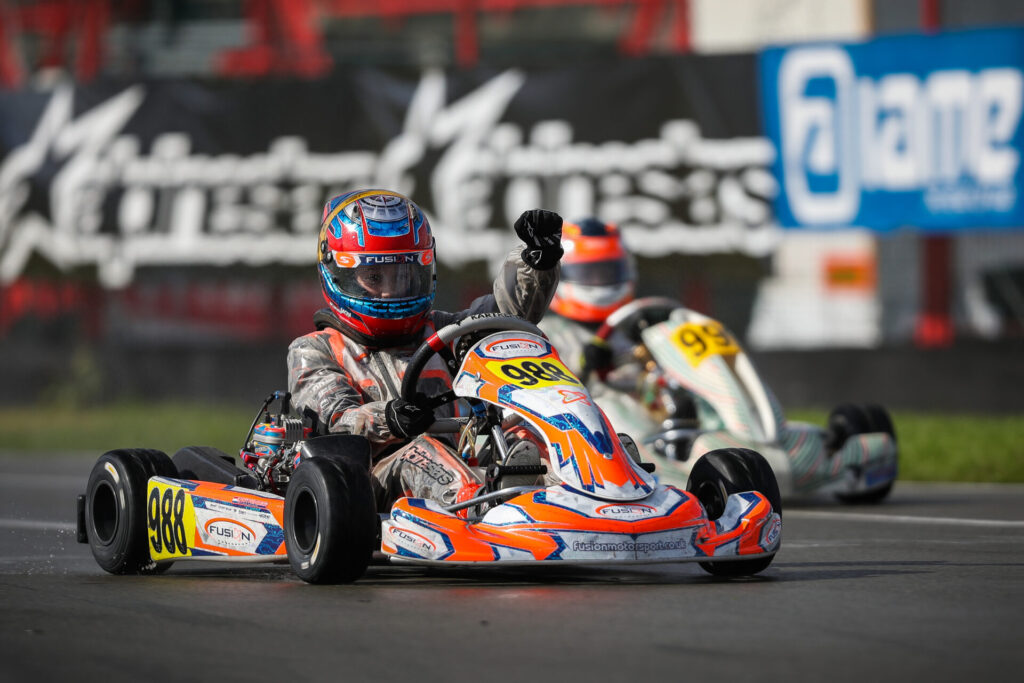 More than two months since its opener at France’s Aunay-Les-Bois, followed by a second meeting at Italy’s 7 Laghi, IAME Euro Series headed to Belgium’s Karting des Fagnes International Raceway last weekend for a much awaited title-deciding final in the Senior, Junior and Mini classes.

The Belgian Elie Goldstein shone on home soil by winning the last race of a very open Senior category where the title went to the Brit Guy Cunnington. Aaron Walker concluded his season with another dominant performance which earned him Junior’s final trophy, while Sacha Van’t Pad Bosch’s victory in Mini could not prevent Cathal Clark from claiming the crown! Khali Atkins, Angelo Meli and Roman Kamyab were named “Drivers of the Day”.

As for each round of IAME Euro Series, the meeting of last weekend benefited from a high definition video stream coverage, added to behind the scenes video footage, like drivers and officials’ interviews, showing the continuous commitment of the RGMMC Group and its professional crew to promote its races at top-level standards.

Despite some rain earlier in the afternoon, Mariembourg’s tarmac was dry enough to keep slick tyres on for Sunday’s Final. The start of the 20 lap-race did not go to plan for Shields, winner of the Prefinal, who went from first to 24th due to troubles in the opening lap. Goldstein took the lead, chased by Cunnington, Rivaldo Van De Westelaken (Daems), Balota and Enzo Lévêque (Team KLN). As the race went on, Balota reduced the gap on his Belgian countryman and briefly led the race before a mechanical issue put him out of contention! Having built a big-enough gap, Goldstein would not be caught again to become this season’s third different winner in Senior!

Behind him, the battle for the class title raged between Lévêque and Cunnington, split by Sean Butcher (KR Sport) into the race’s closing stages. While the Frenchman seemed to have secured the title by finishing second, two positions ahead of Cunnington, a post-race penalty for Butcher eventually handed the crown to his British rival for… one point! Promoted to fourth and fifth place respectively were Alessandro Tudisca (Ravet Racing) and Khali Atkins (Croc Promotion) who also received the “Driver of the Day” Trophy for his seven-place recovery.

Ruben Volt (Dan Holland Racing) started the weekend on the right foot by securing his second pole position of 2020. Nathan Ottink (Daems Racing) was classified second ahead of Santiago Vallve (Kart Republic Spain), Aaron Walker (Strawberry Racing) and Youri Bonte (Delré Racing). Walker took one step closer to the title with one victory and a couple of third places in the Qualifying Heats. Winner of one heat as well, Oliver Greenall (Fusion Motorsport) collected the same amount of points but missed the Prefinal’s pole position because of a Qualifying lap difference. Volt, the third winner of the day, was classified in third place ahead of Vallve and Yani Stevenheydens (EGP Racing Team). Vallve managed to win Sunday’s Prefinal in front of Walker but both drivers were denied their result by a penalty, which gave the Final’s pole position to a recovering Ottink.

Coming to the most decisive race, wet tyres were on for all the competitors despite no more rain past the lunch break. Only one, the Belgian Angelo Meli, chose to keep his slick rubber. The start of the 16-lap race saw Vallve take the first lead but Walker fought his way through while Greenall fell down the order after a spin. As the Final went on, the contenders started to struggle for grip as the circuit kept drying out. Greenall still managed to climb up to second in front of Volt but behind Walker. Faster than the rest on his slick tyres, Meli recovered up to third and put Greenall under pressure. In the penultimate lap, he went for an audacious move around the outside of the first corner but could not find a way past the Brit. Further ahead, Walker could enjoy both the victory and his first Junior title at the end of a dominant performance! Greenall secured the second place ahead of Meli, named “Driver of the Day” for his powerful recovery, while Volt finished fourth in front of Vallve.

As the rain started pouring prior to the race proceedings, drivers had to put on wet tyres for the opening Final of the Sunday afternoon. Van’t Pad Bosch took the best start ahead of Thomas Strauven (Strawberry Racing), Kuzhnini and Gelade while Clark went from second to sixth. The fight for glory quickly involved only two drivers with Van’t Pas Bosch and Strauven pulling away from their pursuers. The Belgian went from chaser to leader past the halfway point but Van’t Pad Bosch kept pressuring him towards the 14th and final lap.

While Strauven firmly held the lead with a couple of corners to go, Van’t Pad Bosch did not give up and dived around his inside in the last turn! Strauven could not fight back on the finish straight and had to admit defeat for 0.2 seconds behind Van’t Pad Bosch! Kuzhnini, third on track, was classified sixth after a penalty, promoting Ferrer on the podium ahead of Clark, winner of the series, and Ramaekers. The Brit Roman Kamyab, ninth at the flag, was the class’s “Driver of the Day”.

Despite not winning any of the three races in the calendar, Guy Cunnington’s consistency paid off as he took the Senior title for just one point ahead of Enzo Lévêque (174 to 173), while Cian Shields (166) rounded up the final podium. Harry Platten concluded his season in fourth place with 161 points, followed by Sean Butcher at 157 points.

Aaron Walker is this year’s title winner in the Junior class thanks to a pair of victories and 184 points, six more than his closest rival Santiago Vallve. Oliver Greenall stepped on the third step of the standings’ podium with 173 points, ahead of Bart Harrison (161), Bart Ploeg (160) and Freddie Spindlow (159), separated by two points.

In Mini, Cathal Clark claimed the title with two victories and 182 points, three more than Sacha Van’t Pad Bosch. Tiziano Kuzhnini had to make do with third overall at 171 points, followed by Adrian Ferrer (169), Leo Robinson (168) and Thomas Strauven (167), split by a mere two point-gap.

As always, there was live video stream and commentary coverage during all official sessions, which was available to stream worldwide, provided by RGMMC Productions’ video crew.

The 2020 season is not over yet! The RGMMC Group is already looking forward to welcoming teams and drivers to the first edition of the International IAME Games, scheduled from November 26th to 29th on the Kartodromo Internacional do Algarve at Portimao!

The Top 3 finishers in each class at Mariembourg, as well as the best three drivers in the season’s final standings, all received a free entry to the event! More information and entry form available at www.iameeuroseries.com!