Kenneth Chung, 47, Dick Yu, 16, and Michael Yuen, 13: three different generations of drivers for a common goal: to represent Hong Kong in the eighth edition of the IAME International Final that will gather more than 460 participants competing in one of the biggest karting events in the world from October 15th to 19th at Le Mans International Karting, in France. The Hong Kong trio is to drive with the CRG Factory Team with ambitions as high as the level of competition on track! 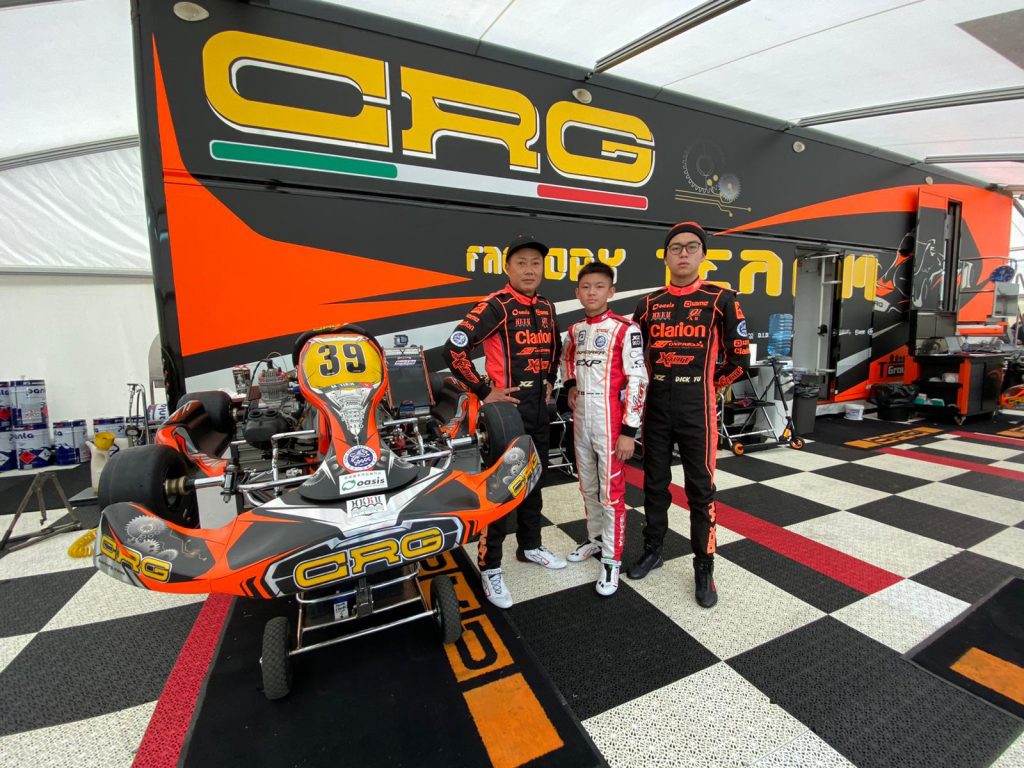 Le Mans Karting International welcomes back next week the peak event of the IAME annual racing calendar: the eighth edition of the IAME International Final featuring 463 drivers coming from all over the world to compete for glory in the seven classes going from Mini to Super Shifter.

Amongst the 45 nationalities entering this year’s race, Hong Kong can count on an ambitious team mixing experience and youth that will for the first time work in close partnership with the CRG Factory Team.

The most experienced member of the trio is Kenneth Chung (front in the picture below) who will be competing within the 58 participant-filled X30 Master category. For the past 25 seasons, this 47-year-old driver has been an active member of the national and international karting scene.

His impressive resume includes eight victories in the Chinese Karting Championship as well as three participations in the IAME International Final. Along with his driving activities, Kenneth has also been making a name for himself as a coach for young drivers, which allows him to give back to the next generation of talents what his long career has taught him.

Kenneth Chung (X30 Master, n°425): “My goal for this race is to try something new and challenge myself! This is the first time that I’ll cooperate with the CRG factory mechanical team and drive the official CRG chassis. At 47 years old, I’m very interested in what sort of chemistry we can create in the Master category! I will also bring with me two young drivers who will experience such a top-level competition and give them the support they will need during the week.”

The second driver to be part of the team is Dick Yu, 16 years old. Coached by Kenneth since the age of six, he’s been walking in his mentor’s footsteps by winning the Hong Kong Kart Club Championship on three annual occasions, becoming the 2017 Chinese Karting Championship Annual Winner while also reaching the Top Three of the IAME Asia Series.

As for Kenneth, the Le Mans International Final won’t be a first for him as he already participated three times in IAME’s annual karting celebration. He will compete in the X30 Senior class, the most-crowded field of the event with 136 drivers.

Dick Yu (X30 Senior, n°246): “I feel so excited because this race is a yearly examination of my karting career since 2016! I think the most challenging thing is that all the drivers are competitive, which will make me feel energetic on track. Besides, this is the first time that I’ll join the CRG Factory Team. I expect to learn something new and useful from the professionals and fight for a good result.”

Both Kenneth and Dick will be amongst the drivers to keep an eye on during the competition as their prime ambition is to reach the Top Ten of their respective classes. Kenneth, particularly, will be aiming at a good result for what will be his last international event before focusing on driver coaching for the future.

Michael Yuen, 13 years old, is the youngest member to complete the trio. Despite a relatively-fresh six month-experience behind the wheel of a 125 cc engine go-kart, this young hopeful has been busy showing the extent of his skills with impressive results in no less than twelve races this year, half of it as part of the National Kart Club Championship of China, five in the IAME Series Asia and also an appearance in the Asian Karting Open Championship.

For his maiden participation in the IAME International Final, he will benefit from the advice of Kenneth, his coach for the last six months, to progress through the stages of the event the best way possible in the X30 Junior category crowded with 106 drivers.

Michael Yuen (X30 Junior, n°39): “I’m very thrilled because this is my first time competing in a World Series race, therefore these following days are very important to me because I can gain experience and improve myself. There’s definitely some pressure but I think this is a good way to move forward, so I can’t wait to begin! Besides, this is my first time joining the CRG Factory Team and to be part of a huge professional team in the karting community is a very good opportunity to learn and definitely a great experience since I’ve been a CRG fan ever since I started karting. Definitely looking forward to the weekend!”

The eighth edition of the IAME International Final officially starts on Tuesday, October 15th with the first non-qualifying practice sessions followed by the qualifying sessions for all classes.

The event will be available on The RaceBox website with live timing & streaming as well as daily results.