The penultimate round of the 2019 WSK Euro Series at South Garda crowned yesterday Marco Ardigo in the KZ2 class while Dexter Patterson (OK), Arvid Lindblad (OK Junior), and Douwe Dedecker (60 Mini) claimed victory in their respective categories in the Temple of Karting! 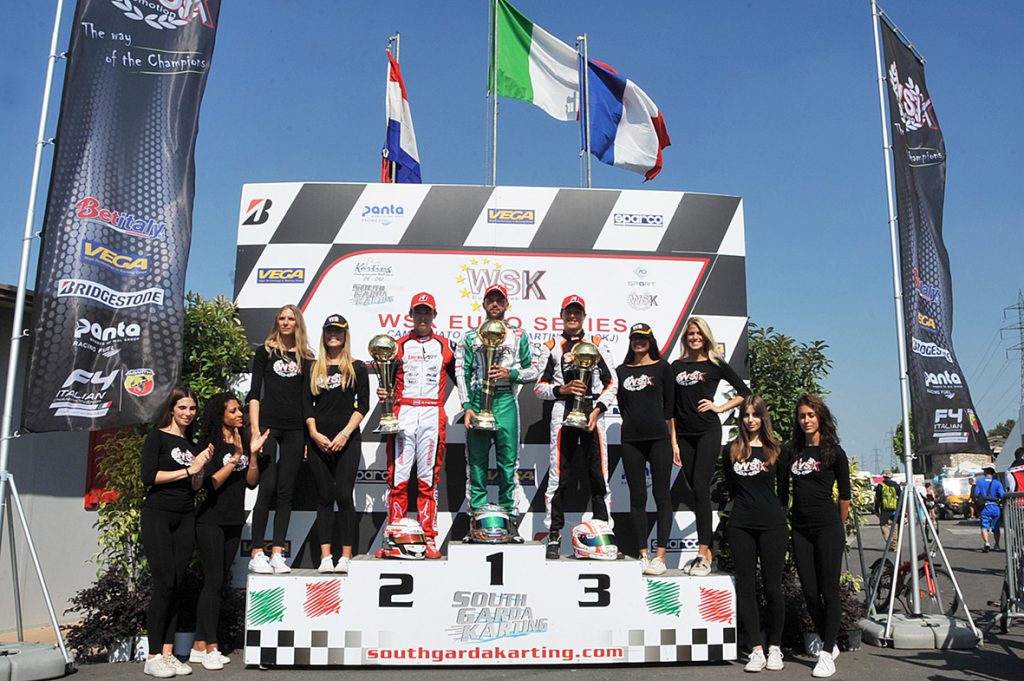 Ardigò wins both Final and title in KZ2!

Marco Ardigò is quite skilled in giving his best in the most important moments. In the occasion of KZ2’s decisive challenge, he made the most of it by securing the Pole position of the Final and leading the race from lights to flag ending first in the final classification of the category. His teammate Simo Puhakka (Tony Kart/Vortex), who was leading the standings after the first round, was hit by bad luck. The Finn dominated the event until the Prefinal but then had to retire from the last race due to a contact at the start. Behind Ardigò, the battle has been intense with four drivers challenging each other for the remaining places of the podium. The Dutch Marijn Kremers (Birel Art/TM) had the best of his rivals and ended second leading the French Emilien Denner (SodiKart/TM) as both managed to keep the Italian Matteo Viganò (Tony Kart/Vortex) and the Dutch Bas Lammers (Sodi Kart/TM) behind.

Patterson heading towards the win in OK.

Dexter Patterson (KR/IAME) put in a perfect weekend in OK: the Scot collected all the points available in the heats and Prefinal A and aimed to get the victory in the Final, a result that he achieved relegating the Italian Lorenzo Travisanutto (KR/IAME) – that has been his main rival in Lonato – to the second place. The latter recovered well up to second leading the competitive British driver Harry Thompson (FA Kart/Vortex), who rounded off the podium. Travisanutto is still leading the classification and is followed by the Swede Dino Beganovic (Tony Kart/Vortex), who won the Prefinal B, but a fearsome Patterson is now close and ready to play his cards at the last round of the Series in Adria.

Lindblad overtakes everybody and wins in OKJ.

A very exciting OK Junior rewarded with the victory the unstoppable run of the British driver Arvid Lindblad (Exprit/TM), who managed to recover eight positions and get the top step of the podium at the South Garda Karting. Lindblad put in a lightning fast getaway as did James Wharton (FA Kart/Vortex), who recovered from eleventh to second. The Italian Andrea Kimi Antonelli (KR/IAME) had hoped for a better result, as he started from the lead but slipped down to third in the end. This result allowed him to take the lead of the classification though, while the Dutch Thomas Ten Brinke (FA Kart/Vortex) is second. The Italian Alfio Spina (KR/IAME) was also disappointed as he lost the second place due to a penalty following a move deemed irregular by stewards.

Dedecker, the strongest of 60 mini in Lonato.

The Belgian Douwe Dedecker (Parolin/TM) confirmed his positive momentum in Lonato taking the Pole position and the victory in the Final, a race that he led throughout. Thanks to a great start from the third row, Manuel Scognamiglio (Tony Kart/TM) tried to challenge the leader sliding in behind him and trailing him. Despite his grit, the Italian had to settle for second. The third place went to the driver from the United Arab Emirates Rashid Al Dhaheri (Parolin/TM), who lagged a bit behind. The Brit William Macintyre (Parolin/TM) had a more difficult weekend than those of the previous rounds. He managed nevertheless to keep the classification lead and will certainly fight for the win next week in Adria.

The closing round of the 2019 WSK Euro Series will unfold this weekend on the International Raceway of Adria. An event that you will be able again to follow with The RaceBox!