VDK Racing and Marcus Amand shone through the storm of Castelletto di Branduzzo last weekend for the Second Round of the WSK Open Cup! Entered in OK-Junior, the young French-Finn dominated his rivals in the Final before a penalty made him lose his result while depriving the Belgian team of a first success with the Kart Republic chassis. 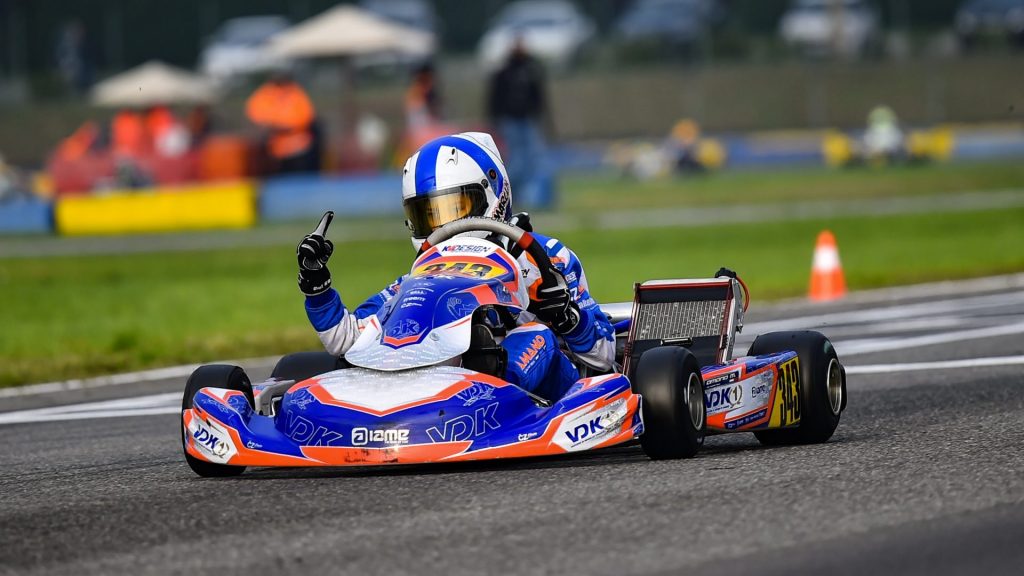 VDK Racing competed last weekend on the Italian circuit of Sette Laghi, host of the closing meeting of the WSK Open Cup. Among the 170 drivers entered in the three categories OK, OK-Junior and 60 Mini, Marcus Amand was the representant of the Verdaasdonk team’s colors in the Junior field. The race at Castelletto also came as an appropriate testing ground for their Kart Republic chassis in preparation for the 2020 season.

Early on in the competition, the weather complicated the task of the drivers in qualifying where Marcus still set the sixth-fastest time in the second of three groups, meaning he would start his qualifying heats from the fourth row on the grid. Feeling at ease with a perfectly-tuned material, the recent European Junior Champion could again show the extent of his skills on track. Going through his run of heats without major trouble, including a win and a second place as best results along with the event’s fastest race lap, he qualified in the category’s leading group heading for the Prefinal B.

On Sunday morning, despite a less happy start that saw him lose some ground in the first lap, the French-Finnish driver didn’t wait long to re-gain momentum and recovered the field up to second position, only two tenths of a second from a potential win! The start of the final round went perfectly for Marcus who took the lead from the poleman in the first few corners. Driving faster each lap, he opened the gap to more than a second from the chasing pack, keeping enough momentum towards the end of the race to prevent himself from any attack of his direct rivals, too busy fighting each other in the early stages.

16 laps later, he crossed the checkered flag as the winner before being given a penalty that pushed him down to sixth place! The Race Officials made their decision based on a contact with another driver occurring between the starting procedure and the first corners where Marcus’s responsibility wasn’t directly involved.

Despite the bittersweet conclusion and the legitimate disappointment that came with it, their driver’s overall performance comforted VDK Racing in their choice of the Kart Republic / IAME package. In all sorts of conditions on the Sette Laghi Circuit, the Italian chassis’s potential once again proved to be optimal, giving the Belgian team good signs for 2020 where all their drivers will use the Kart Republic-build material in international competitions.

With the WSK Open Cup wrapped up, VDK Racing heads towards a final race meeting before the conclusion of their 2019 season: the WSK Final Cup to be run from November 14th to 17th on the Adria International Raceway. Marcus Amand and Antonio Leite will be on track in OK-Junior, Thomas Imbourg will make his return in OK along with a newcomer from France Florian Rousseau-Ricci.