What better way to wave the chequered flag on your karting season than under Portugal’s sunshine, near the Atlantic ocean’s seaside? A great environment is just the first of many appeals behind the upcoming International IAME Games, scheduled in Portimao at the end of November! Imagined by RGMMC as a big season-closing festival, this new karting event will see the best international IAME teams and drivers put their skills and material to work one last time before going on winter holidays! 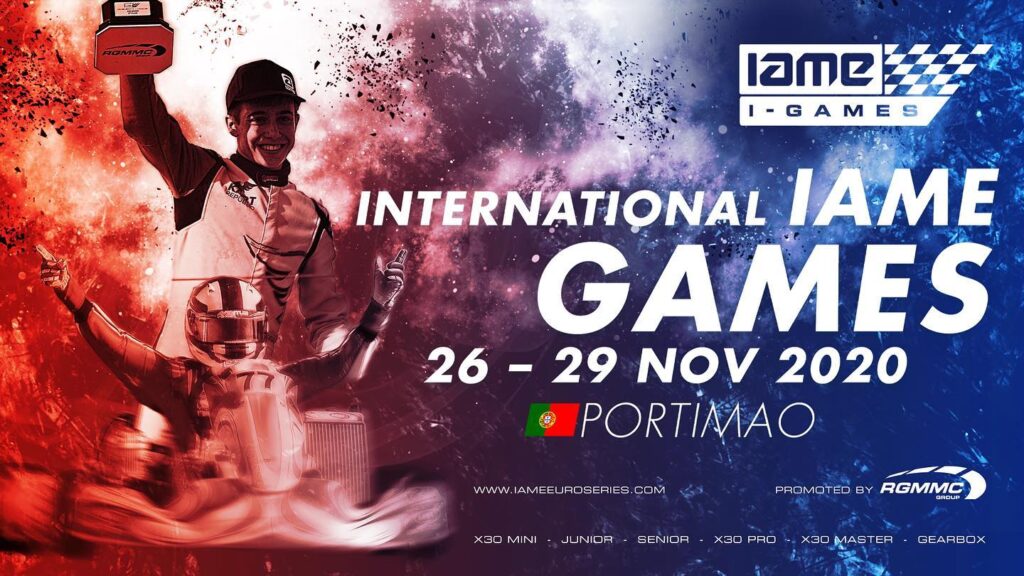 2020 will go down in history books as a year like no other for the whole karting community. While the unprecedented events that have shaken up the international calendar led to cancellations or postponements, they have also paved the way for new ideas. The International IAME Games is one of them, giving drivers and teams not only a great opportunity to race in a truly international conclusion for the IAME series, but also a very good reason to pack their luggage for a nice seaside escape in November!

Since 2012, IAME teams and drivers all over the world had taken the habit of crossing one particular race in their calendar: IAME International Final at Le Mans. Since the event, considered by many as IAME’s own world cup, could not take place in 2020, James Geidel and the RGMMC Group started thinking about a potential alternative.

“I really wanted to give a nice event to the drivers for the end of the season,” Geidel explains. “I had the idea of a big RGMMC festival in mind and for at least two years, many teams have been asking to organize something during the Winter break. They felt that the current time-space between the IAME Final, in October, and IAME Winter Cup, in February, is too big.”

A great location in the sunshine

The purpose of the Games is double: provide teams and drivers with another exciting opportunity to do what they do best, and fill in the long gap of inactivity between two seasons, especially since this year’s IAME Final won’t go ahead as planned. Choosing the perfect place was the next logical step, in an attempt to match the teams’ demands in accordance with the current context.

“The Algarve circuit is a well-known motorsport destination,” Geidel stresses. “It’s located in a lovely environment with lots of hotels for drivers, teams, and families. So, the choice makes a lot of sense and we should also expect good weather.”

Working conditions should indeed be ideal in and out of the circuit with average temperatures often exceeding 15°C in this southern region of Portugal in November. The proximity of the Atlantic ocean will also provide participants with a great-looking and enjoyable destination.

“I like the idea of going to Portimão, which will be a new challenge with its long straights and fast flowing corners,” says British driver Aaron Walker (Strawberry Racing) who will be racing in the Junior class at the Games. “I expect a lot of drivers with a high level of competition. It will be a real challenge!”

“Since RGMMC has done a fantastic job with their other series, I think it will be a good event, adds his fellow countryman Guy Cunnington (Strawberry Racing). “I haven’t been to the track, so it will be a first for me. From what I have seen and heard, it’s an amazing circuit, so I’m looking forward to getting going. My expectations are very high, I hope that I can complete them by winning the race.”

All IAME classes, the best drivers and a lot of prizes!

Drivers and teams from all over IAME’s large community will be keen to conclude their season with a large-scale event. An expectation that the International IAME Games will fulfill by allowing entries in all classes, from Mini to Master, along with Junior, Senior and Pro.

The Games are accessible through the ‘first arrived, first served’ registration system also used for IAME Euro Series. The competition serves as a direct springboard to Portimao for the final Top-Three drivers in Mini, Junior and Senior classes, as well as for the final round’s best three finishers, who all received a free entry along with a set of race slick tires.

“The idea behind this event is to make something different that can hopefully have an impact. It should be seen as an end-of-the-year festival with a list of superb prizes,” Geidel explains. “Tickets to international IAME events promoted by RGMMC in 2021 will be up for grab, and much more! These will be announced in due time before the Games.”

Extended visibility for all participants

As for all the races promoted by the RGMMC Group, the first International IAME Games will benefit from a high-quality live video stream with commentary coverage, broadcasted on RGMMC Productions’ Youtube channel, as well as IAME Euro Series social media and website. Thanks to the work produced by RGMMC’s professional video crew, drivers will get to show what they are made of before the eyes of an international audience.

Since the Games will also act as a pinnacle event for IAME’s international season, curiosity from karting fans all over the world is expected to be higher than ever, bringing online viewing to new highs. The event and its refreshing concept are also likely to draw the interest of professional scouts from other international series in search of eye-catching performances ahead of the 2021 season.

Are you interested in competing in the first IAME International Games at Portimao? Register now!