The Final Round of the IAME Series Benelux was held last weekend on the Karting des Fagnes of Mariembourg where Loïs Delbart again showed his pace and skills in X30 Senior. Confident at the wheel of a finely-tuned material, the young Belgian concluded his 2019 season on a strong note in variable weather conditions. 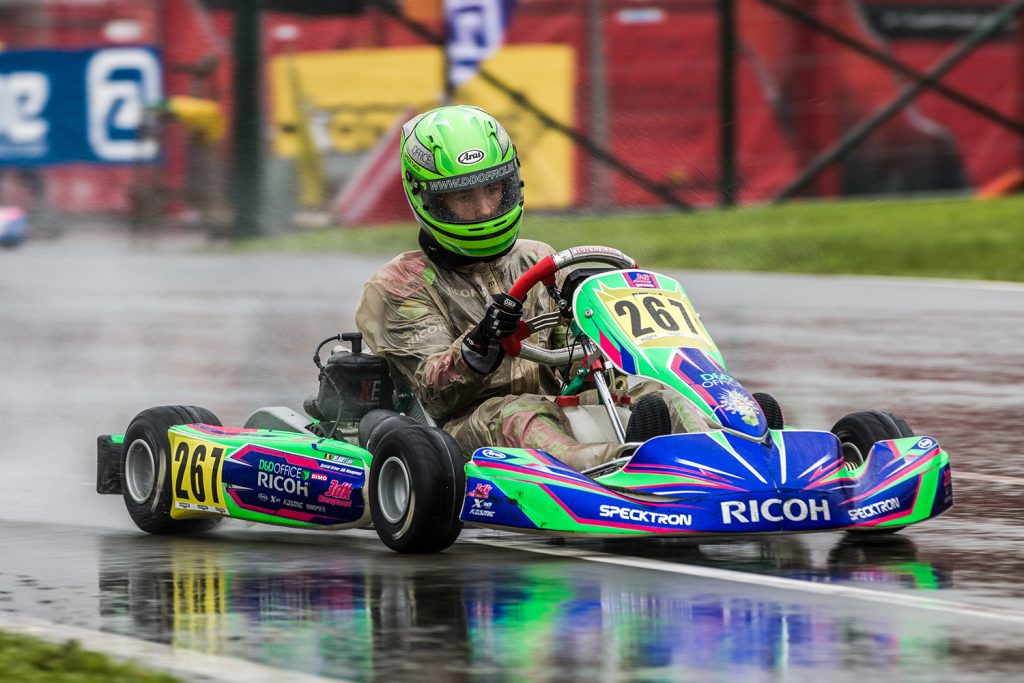 Gray skies, heavy wind, low temperatures, and rain: all the right ingredients of autumn weather gathered last weekend for the closing meeting of the IAME Series Benelux, marking the second appearance of Loïs Delbart in the X30 Senior class as part of the Belgian Karting Championship.

After competing in the Junior category for the early part of the season, both on a national and international level, the young driver and his family decided to go for the next step, starting at Genk in mid-August. With that first experience being successful, the race at the Karting Des Fagnes came as another opportunity to confirm his ambitions in the wake of one more solid performance at the IAME International Final of Le Mans.

Following a rainy Friday for free practice, the Mariembourg track would quickly dry up on Saturday for qualifying and the opening heats. Put in the first of the two groups, Loïs concluded his effort with the 20th best time out of 52 participants, enough for him to start from the fifth row on the grid for his qualifying races.

In his first race, his good start from the outside line of the track, doubled with a consistent and steady pace made him overtake three rivals up to seventh. Driving like a metronome, he reached the same position in his next two heats, not only building more confidence but also collecting enough points to qualify on the fourth row of the Final grid along with the category’s 34 best drivers.

The ultimate race of the X30 Senior’s weekend, however, wouldn’t eventually take place following a joint decision by IAME Belgium and the RACB officials to cancel it for safety reasons. Given penalties going to several drivers found guilty of non-compliance with the rules, Loïs was promoted several positions in his heats to be classified eighth in the category’s final hierarchy!

“Conditions certainly didn’t help but I can be happy with my performance,” says Loïs. “I finished seventh in all of my heats and the speed was there all weekend. I could have done something very good in the Final but events beyond our control prevented that from happening, that’s a shame. The most important thing to remember is that I regained that confidence I had missed during the season to fight again at the front! All in all, I can be proud of my debut in Seniors, probably the most competitive of all categories, and I hope to carry on this path next year!”

“I would like to thank VDK Racing and Dimokart who both helped me progress as a driver this year. Thank you also to all the mechanics who took good care of me during our twenty races this season: Didier, David, Kenny, JC, Richard, Julien, Thierry, Pierre, Ulysses, Aurelian, and Dominic.”

“Thank you also to my sponsors without whom none of this would be possible: Ricoh, D & D office, Specktron, ETS heating, Sanitaire Sprl, Jean Yves Detrait, and the ‘Cuvée Gerpinnoise’. Last but not least, I want to thank my family from the bottom of my heart, especially my dad Christophe, always by my side as an attentive coach so that I can perform at my best, my mom for her unconditional support, my big sister, my grandparents, my godmother, my godfather and my many supporters for their support!”

With his racing season now closed, Loïs Delbart will enjoy a well-deserved rest during the winter break to recharge his batteries while taking the time to consider his future in go-kart competition.