Oliver Bearman (Senior), Freddie Spindlow (Junior) and Leo Robinson (Mini) made the most of their Qualifying Heats to lead Saturday’s provisional classifications at the end of a busy day of racing on the Kartodromo Internacional Lucas Guerrero of Valencia, host of the fourth edition of the IAME Winter Cup organized by RGMMC. 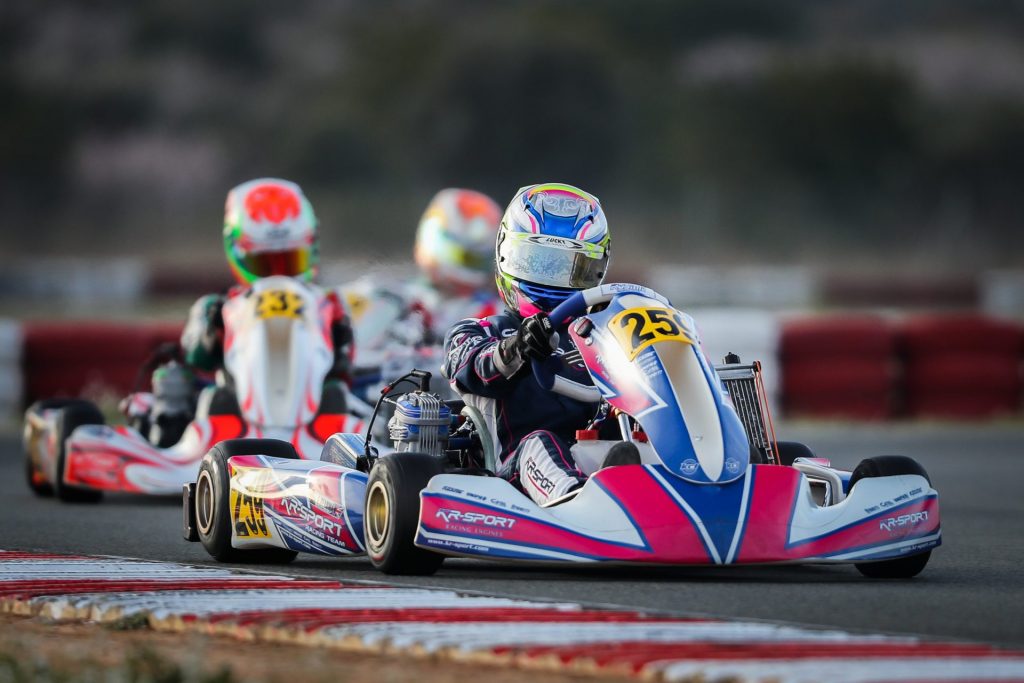 22 Qualifying Heats were run this Saturday on the Chiva Kartdrome, near the city of Valencia, South-East of Spain. As for Friday’s Free Practice and Qualifying sessions, weather and track conditions remained ideal, which allowed nail-biting competition between the 180 entered-drivers battling wheel-to-wheel in their search for valuable results.

Senior: Bearman keeps the lead ahead of Bradshaw

The Qualifying Heats in the X30 Senior class formed the scene of a rivalry between two British drivers in Oliver Bearman (KR-Sport) and Callum Bradshaw (Fusion Motorsport). The former made perfect use of his pole position and delivered an almost-flawless string of heats, including three wins and a second place behind Bradshaw. The latter, having won his first three heats as well, missed the class’s leading spot after finishing fifth in his last race.

The fight for the top spot raged all day in X30 Junior where drivers from Britain and Spain, again the two most-represented nations in the class, shared the upper part of the classification. Freddie Spindlow (KR-Sport) rose as leading man after accumulating two second places and a win, followed by Daniel Guinchard (KR-Sport) whose win and second position were not enough to defeat his teammate for the lead following an earlier fourth-place finish.

Santiago Vallve (Kart Republic Spain) concluded his day on a high with a victory, which earned him the overall third place ahead of Alfie Rigby (KR-Sport). The Brit, winner of his first two races, could have claimed the leading seat without a penalty pushing him from first down to 10th in his last heat. His countryman Arvid Lindblad (Oliver Rowland Motorsport) follows in fifth place with two third positions as best results.

13th overall, 2019 Mini Winner Freddie Slater (Fusion Motorsport) started his heats on a winning note but a contact with another rival while battling for the Top Five forced him to retire at the end of the day. Polesitter on Friday, Aaron Walker (Strawberry Racing) achieved a fifth and a second place but eventually classified 15th overall after a penalty denied him another second place-finish.

Mini: Robinson the most consistent

The competition was unpredictable in the X30 Mini class where all six Qualifying Heats were won by six different drivers! Consistency would eventually be one of Leo Robinson’s keys to success. The Fusion Motorsport driver secured an early win followed by two second place-finishes that earned him the leading seat, two points before Jan Resurreccion Peral (Monlau Competicion) who clinched a race as well.

Check out the full heat classification for Senior, Junior and Mini.

The IAME Winter Cup by RGMMC comes back tomorrow with the Second Chance Heats for drivers outside the Top 30. In each class, six spots will be up for grab on the Prefinal’s starting grids following in the second part of the morning. Prefinals’ results will determine the starting order for the categories’ final races to unfold in the afternoon.