24 Qualifying Heats out of 36 took place on Saturday, 7th September on the Alahärmä track as part of the FIA ​​Karting World Championship – OK/Junior. Although it is impossible to know the actual and final positions before Sunday at midday, the day highlighted very positive performances by some participants, while others were falling behind due to the pitfalls of the weather and the very selective Finnish circuit. 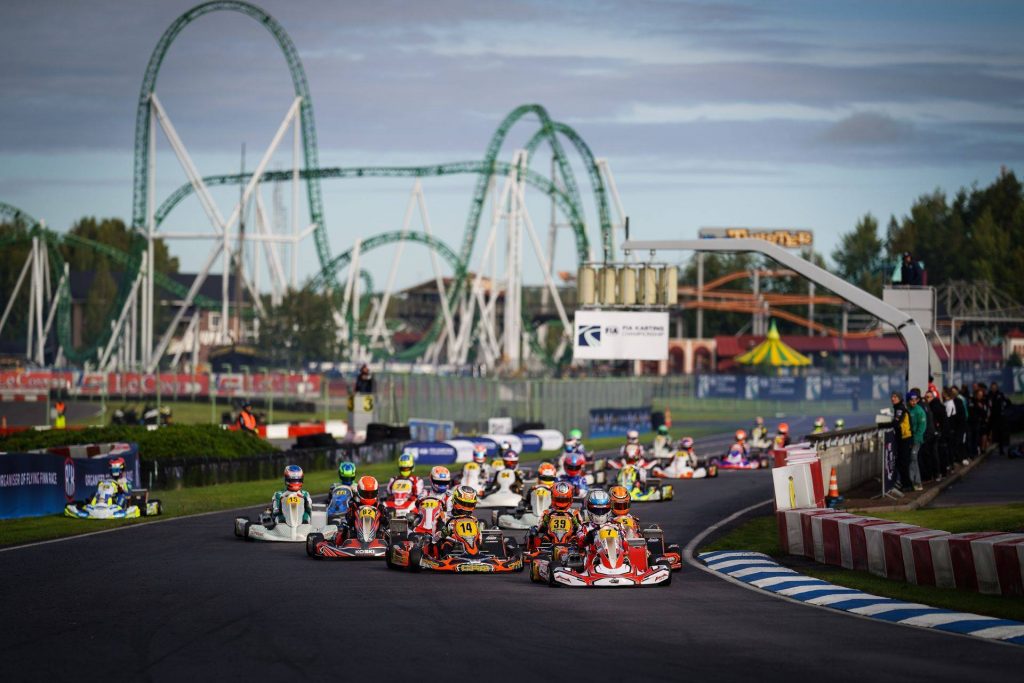 Especially important in Finland, the weather over the Power Park was changing rapidly. It was fine in the early morning but the track was still wet after the nighttime showers. The racing lines dried quickly under the combined action of the sun and the karts, but the parts in the shade still had wide wet patches. Before the lunch break, the track was completely dry, but the clouds were increasing in the Alahärmä sky. At the beginning of the afternoon, heavy rain changed the situation and continued until the end of the day.

Many crashes, not necessarily caused by contact, and decreasing in frequency, influenced the rankings over the Heats. Regressions and retirements affected several favorites, while penalties fell like the rain.

A rare phenomenon, the public was already in attendance in large numbers in the grandstands during the first races of the morning, and the Finnish flags fluttered to show the sporting enthusiasm and national pride of the spectators. The gradual deterioration of the weather did not affect their motivation throughout the day.

Juho Valtanen (Redspeed/IAME) took full advantage of his 2nd position in Qualifying Practice to make a great run in his Heats with three wins and a 5th place finish. Dilano Vant’hoff (Exprit/TM) progressed significantly with good consistency and a win to his credit, which allowed him to be ahead of three tied drivers: Kirill Smal (Tony Kart / Vortex), Rasmus Joutsimies (Tony kart/IAME) and Gabriel Bortoleto (CRG/TM). Joshua Dufek (KR/IAME) showed convincing performance levels while the title holder Lorenzo Travisanutto (KR/IAME) was also back in the leading group with great intelligence. Dino Beganovic (Tony Kart/Vortex) had a win, but lost ground in a Heat, as did Dexter Patterson (KR/IAME), who recovered many places. Both hampered by a retirement, Gabriele Mini’ (Parolin/TM) and Nikolas Pirtttilahti (KR/IAME) drove good races to try to catch up. Joseph Turney lost out because of a mechanical problem followed by a second retirement.

4th fastest in Qualifying Practice, Thomas Ten Brinke (FA Kart/Vortex) had three great victories before closing the day with a 2nd place. He made the difference against Laurens Van Hoepen (FA Kart/Vortex) and Rafael Chaves Camara (Exprit/TM), with two wins each. Meanwhile, Andrea Kimi Antonelli (KR/IAME) finished with two victories to stay in the leading group. James Wharton (Parolin/TM) was successful in coming back to the top along with Josep M Marti Sobrepera (Tony Kart/Vortex) and Ugo Ugochukwu (Fa Kart/Vortex). The poleman Nikita Bedrin (Tony Kart/Vortex) lost some places without losing all of his chances. A retirement in the first Heat was costly for Arvid Lindblad (Exprit/TM), but he didn’t give up.

On Sunday morning, 12 Qualifying Heats, four in OK and eight in Junior, will still be contested before the release of the names of the 34 finalists in each category who can fight for the two FIA Karting World Championship titles later in the afternoon. The weather forecast again includes some rainy periods.

Like for every event in the FIA Karting calendar, The Racebox provides you with a special page featuring live timing and live streaming plus our daily reports and social publications to keep you up to date with the results and info from Finland!