The FIA Karting World Championship – KZ, the FIA Karting International Super Cup – KZ2 and the third round of the Academy Trophy began on Friday, 2nd October 2020 with changing grip conditions while the skies showed a clear intent to rain on Lonato. Marijn Kremers (KZ), Viktor Gustavsson (KZ2) and Tom Braeken (Academy) were the heroes of this first day of competition. 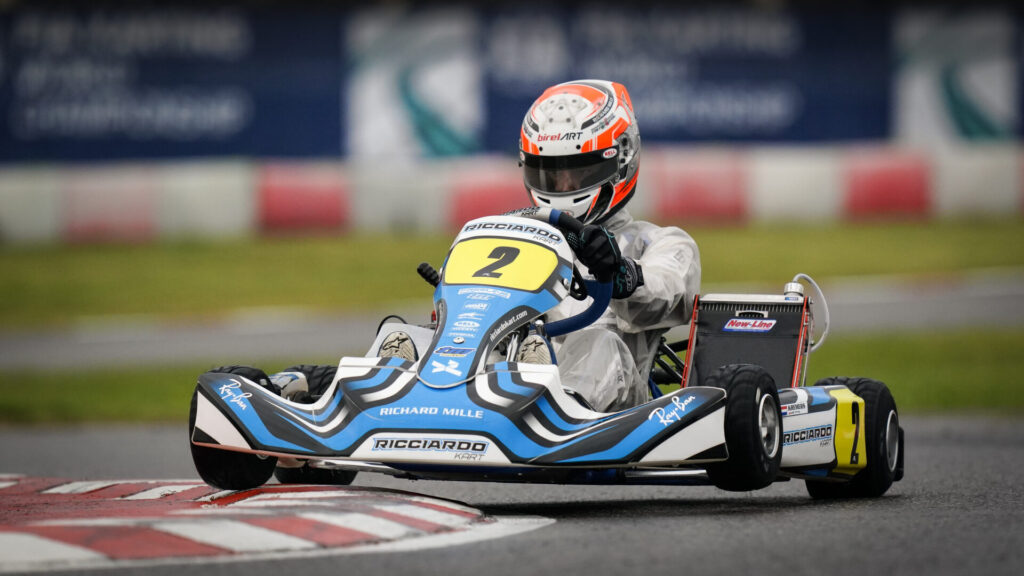 A very satisfying field of 162 drivers are competing in the FIA Karting competition at Lonato, divided into three categories: 33 in KZ, 99 in KZ2 and 31 in Academy. As of the morning, Free Practice took place on a wet track which dried out gradually during the day while remaining subject to the movements of the clouds. Qualifying was marked by rapid changes in weather and the Lonato track saw a wide range of grip situations that made the drivers and their mechanics understandably nervous.

Divided into two sessions for their Qualifying Practice, the 33 participants of the FIA Karting World Championship – KZ had to face a wet track which nevertheless improved very slightly over the laps. Reigning World Champion Marijn Kremers (Ricciardo Kart/TM) took pole position in the final meters of the second session. Was this a sign?

In the rain, Luca Corberi (Tony Kart/Vortex) set the fastest time of the first KZ session with 1’00”822. Jeremy Iglesias (Formula K/TM) came close by 0.052, while Jorrit Pex (KR/TM) was third by 0.127″. Kremers took pole position in the final run with a time of 1’00”496, one tenth ahead of Stan Pex (KR/TM). A third Dutchman, Bas Lammers (Sodikart/TM), completed the top three four-tenths further down the field.

Kremers commented: “We had worked hard yesterday to be fast in the dry. The team had to adapt everything today and they adapted superbly. I immediately understood that I had the best chance of setting my fastest lap at the end of the session. I was careful to cross the line just before the chequered flag and I gave it my all on my last lap!”

Qualifying Practice for the FIA Karting International Super Cup – KZ2 was highly variable. None of the four groups benefited from the same conditions as the others. The Vega rain tyres were sometimes replaced by their slick counterparts with more or less success.

The best lap by Matej Kacovsky (Praga/TM) – 58”461 – in the first session was a surprise for many observers, especially as he was ahead of Valentino Fritsch (Birel ART/TM), Matteo Zanchi (Birel ART/TM) and especially Alexander Schmitz (Birel ART/TM). Benjamin Tornqvist (Birel ART/TM) was the fastest in Session 2 with a time of 56.367 seconds and was more than two-tenths of a second faster than his pursuers, starting with Lorenzo Giannoni (Sodikart/TM). Giuseppe Palomba (Birel ART/TM), one of the favorites, finished third and the Luyet brothers, Jean and Samuel (both on Tony Kart/Vortex), together in fourth and fifth positions.

Reigning European Champion Viktor Gustavsson (Birel ART/TM) took full advantage of the circuit’s increasing grip in Session 3 to take pole position – 53”419 – relegating his rivals by more than four tenths. On slick tyres under a few drops of rain, Arthur Carbonnel () was the fastest in the fourth session with a lap of 58”547, followed by Alessandro Buran ().

Charles Leclerc was present to congratulate the poleman, who was running on a chassis bearing his colors. Gustavsson commented: “The Free Practice had shown that my equipment performed well in both wet and dry conditions, but the conditions were still quite stressful. Pole position is always a good thing in a competition like this.”

Like the other drivers at Lonato, those in the FIA Karting Academy Trophy had to deal with the rain during their Qualifying Practice. However, the track was drying out during Session 1, while it regained moisture due to a rain shower for Session 2.

Trophy leader Connor Zilisch (USA) finished at the top of the second session with 1’03”711, more than two seconds from pole position, as rain made one of its many appearances. Only Macéo Capietto (FRA) was able to keep up the pace 0.063 from the American. In third position, Keanu Al Azhari (ARE) was six tenths further back.

Check out the full Qualifying results in KZ, KZ2 and Academy Trophy.

Drivers will be back on track from 08:00 on Saturday for their respective warm-up sessions, followed by the Qualifying Heats. The weather forecast suggests significant rainfall in the morning and noticeable improvement with possible sunshine in the afternoon.

A live page is at your disposal from Friday to Sunday with live timing and live streaming (on Saturday and Sunday). Reports and results will be published every day on this website.

You may also be interested in: FIA Karting World Championship: Guide to South Garda