South Garda Karting is once again the center of the karting universe with the return this week of the FIA Karting World Championship event on its celebrated circuit! Up to 180 drivers from 41 countries gather this week to Northern Italy for a triple meeting: the World Championship – KZ, the International Super Cup – KZ2 and the closing round of the Academy Trophy. 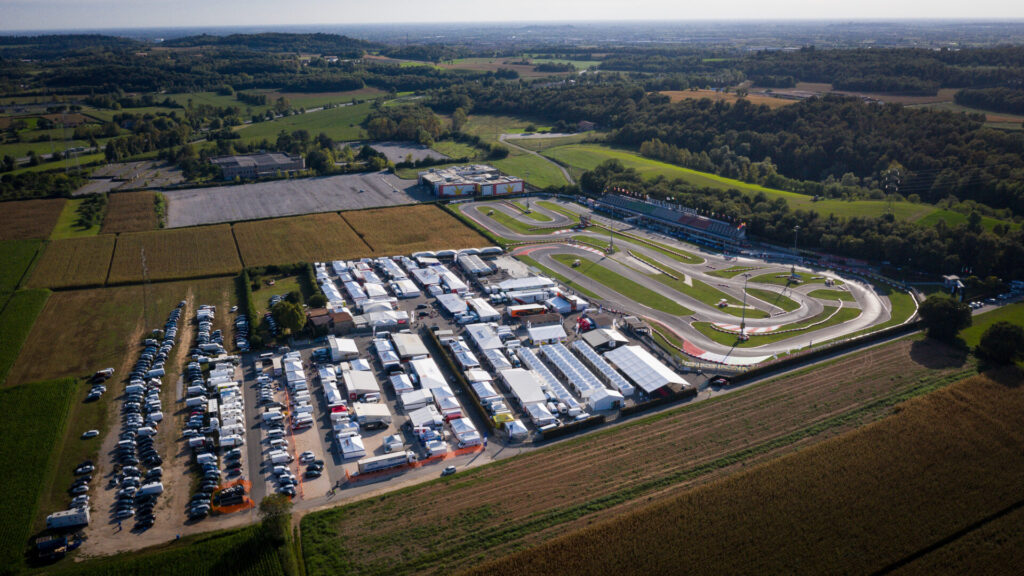 Impacted by the COVID-19 pandemic, 2020 brings the Lonato venue back to the forefront of international competition for the second time in a row, following the withdrawal of Le Mans. Nearly 180 Drivers will meet at the famous Italian circuit for this prestigious competition.

In this period where traveling is still complicated by Coronavirus, the presence of representatives from 41 countries all over the world is very satisfying. A health protocol that respects the guidelines of the FIA and the Italian government will be rigorously applied. Competition will take place in the absence of spectators.

A world reference in karting competition, Lonato sees intense racing activity throughout the year. Due to its geographical location in Northern Italy, the track serves as a training ground for many international teams and allows the major Italian chassis manufacturers to develop their equipment. Lengthened to 1200 meters in 2015, the South Garda Karting track has retained the appeal of its initial layout while increasing both its selectivity and overtaking possibilities. On the organization side, the experience of the Corberi family and its team is a guarantee of the smooth running of one of the most important competitions of the season.

The 2020 FIA Karting World Championship – KZ will look great with a very high-quality line-up in Italy. The rejuvenation of the top category continues thanks to the arrival of many young talents alongside the most experienced professionals. They will be represented mainly by Davide Foré (Birel ART/Vortex) and Bas Lammers (Sodikart/TM), as well as Simo Puhakka (Tony Kart/TM), Jérémy Iglesias (Formula K/TM), Pedro Hiltbrand (Tony Kart/Vortex) and Jorrit Pex (KR/TM).

The FIA Karting European Champion – KZ2 Viktor Gustavsson (Birel ART/TM) will be one of the favorites for the FIA International Super Cup Karting – KZ2 together with Simone Cunati (Birel ART/TM), David Trefilov (Maranello/TM), Giuseppe Palomba (Birel ART/TM) and Paavo Tonteri (Tony Kart/Vortex) who have already shown themselves this season. The Italians will be present in great strength with 40 representatives, more than a third of the 105 drivers from 22 nations.

Alexander Schmitz (Birel ART/TM), Benjamin Tornqvist (Birel ART/TM) and Andrea Dalè (CRG/TM) will be able to count on their great experience in the category, against drivers like Harry Thompson (Exprit/TM), Taylor Barnard (KR/IAME) and Laurens Van Hoepen (Birel ART/TM), recent arrivals from the direct drive categories. Former top drivers with a motorsport background such as Loris Spinelli (TK/TM) and Alessio Lorandi (Parolin/TM) will be back at the wheel of a kart on this occasion.

The third and last competition of the FIA Karting Academy Trophy should not be a surprise with regard to its 2020 winner. Connor Zilisch (USA) has already taken two victories and his current total of 69 points cannot be surpassed or even equaled by his rivals. Still, the race has to go smoothly for him.

The battle for second place in the classification is likely to be tighter. Macéo Capietto (FRA) has a theoretical advantage on his rivals but the two less good results (Heats and Final) have to be taken into account. Maxime Furon-Castelain (LUX), Jonathan Weywadt (DNK) and Theo Micouris (GBR) are the best placed to aim for the podium. The strategy chosen by Zilisch, caution or panache, will undoubtedly influence the final hierarchy by allowing, or not, his followers to score the maximum of points.

A live page will be at your disposal from Friday to Sunday with live timing and live streaming (on Saturday and Sunday). Reports and results will be published every day on this website.