Unlike for Qualifying, Belgian heavens were merciful this Saturday above the International Circuit of Genk, host of the second round of the FIA Karting European Championship – OK/Junior. If the track remained dry for most of the heats, the rain nevertheless showed up for the closing races of the day, forcing drivers to gamble on the ideal tire choices. In the Senior class, the Brit Morgan Porter topped the provisional rankings with Pedro Hiltbrand on his tail, while the OK Junior leading seat was taken by Nikita Bedrin ahead of his Tony Kart teammate Alexander Dunne. 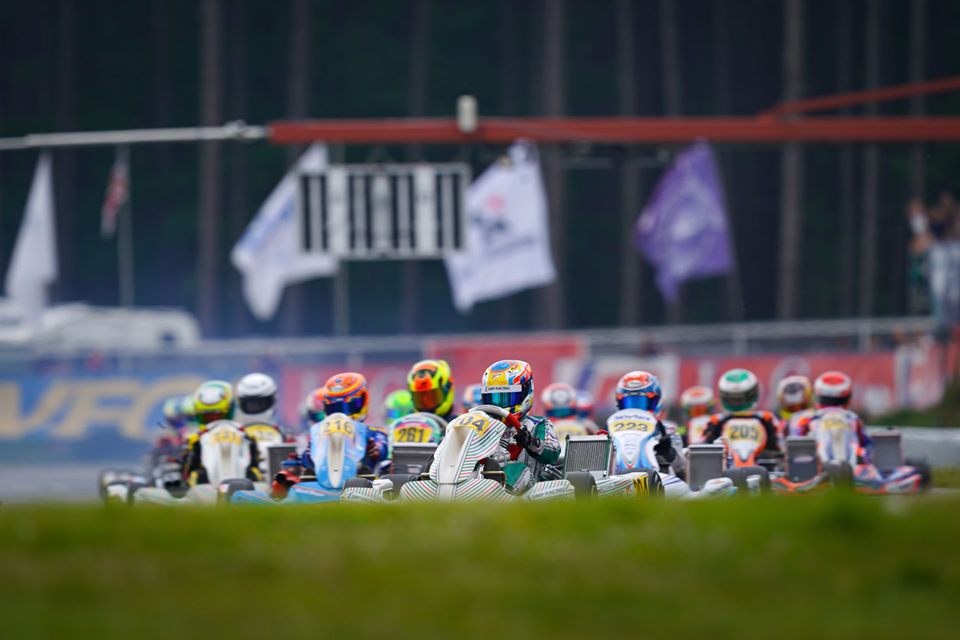 Morgan Porter (KR/IAME) had a good day at the office this Saturday on the Circuit of Genk. The Brit made the best of his Kart Republic chassis to top the provisional points classification, established according to the results in the first four (out of five) Qualifying Heats per driver, with a strong tally of one win and three-second positions. Pedro Hiltbrand (CRG/IAME) managed to collect an equivalent amount of points (6) as Porter who still kept the lead thanks to a faster Qualifying time on Friday. Winner of two Heats, the reigning World Champion Lorenzo Travisanutto (KR/IAME) was classified third within a close point gap from the two provisional leaders. He was followed by Friday’s Polesitter, and winner of one qualifying race, Luigi Coluccio (BirelART/TM). Nikolas Pirttilahti (KR/IAME) closed up the top 5 with other heat winners including Dexter Patterson (KR/IAME), 6th, Dilano Van’t Hoff (Exprit/TM), 7th, both with two races in the bag, Alessandro Irlando (BirelART/TM), 9th, Ben Dörr (KR/IAME), 16th, and Gilles Stadsbader (Exprit/TM), 22th.

The fight for the provisional lead in the OK Junior class came down to a Tony Kart rivalry between Nikita Bedrin (Tony Kart/Vortex) and Alexander Dunne (Tony Kart/Vortex). Leader of his group thanks to a strong second-fastest time in Qualifying, the former went through the day unbeaten with four consecutive wins that put him at the forefront of the points by Saturday night. Dunne nearly missed the four Aces as well when he finished second in one of the races behind… Bedrin! Thomas Ten Brinke (FA Kart/Vortex) cumulated four top-three results to be ranked third before Marcus Amand (Kosmic/IAME), winner of two heats, and Enzo Scionti (Tony Kart/Vortex). Arvid Lindblad (Exprit/TM), 9th, also claimed a race as well as Alfio Spina (KR/IAME), 22th. The fastest against the clock yesterday, Conrad Laursen (FA Kart/Vortex) concluded his day 11th overall with a fourth place as best personal performance.