Rainy weather accompanied the drivers as they took part in their respective Qualifying Series this Friday on the International Circuit of Genk. In changing conditions that made the track grip unpredictable, drivers and teams had to juggle with tire choices in their search for good performance. A task that eventually smiled upon Luigi Coluccio in OK, and Conrad Laursen in OK Junior at the end of an eventful first day of competition at the Kart Grand Prix of Belgium! 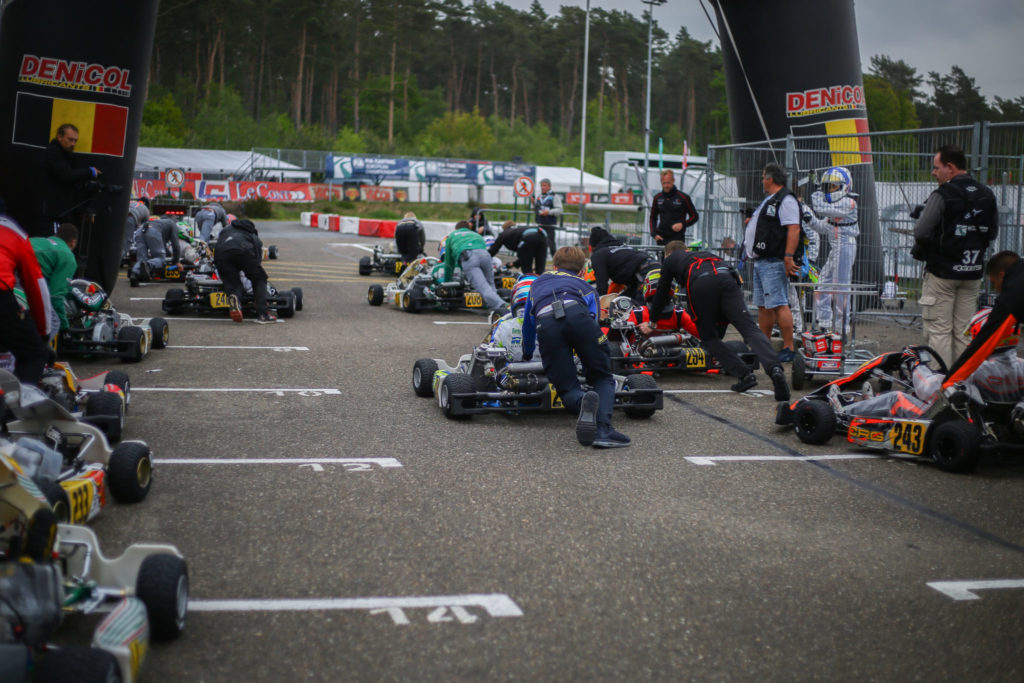 Due to the appearance of slight rain showers at different points during Qualifying, the lap difference between the sessions extended beyond the “101% limit”. As written in the regulation, the overall timing classification in the two classes was therefore established according to the order of each Qualifying Series and not according to each driver’s lap time, a measure aiming at to reduce inequality.

Unlike the majority of the 22 other drivers using wet tires in the second Qualifying Series, Ayrton Fontecha (CRG/IAME) took the bet of putting dry compounds for his attempt against the stopwatch. He went out first on track to find an improving racing line that allowed him to set the fastest time in a narrow two-lap window, building a gap of 4.8 seconds from his closest rival. His performance should have given him the category’s Pole position before it was later canceled for cutting the track limits. A decision that promoted the Italian Luigi Coluccio (BirelART/TM), the fastest in the third Series in 1’07”934, to the first spot in the overall hierarchy.

The fastest in Session 2, Morgan Porter (KR/IAME) followed in second position in the classification ahead of Alessandro Irlando (BirelArt/TM), leader of the first session, Rasmus Kortelainen (Tony Kart/IAME), Dino Beganovic (Tony Kart/Vortex), and Nikolas Pirttilahti (KR/IAME), all leading their respective groups for the Qualifying Heats to unfold from tomorrow until Sunday morning.

Check out the complete Qualifying results for OK and OK Junior.