Last weekend a premiere was waiting for the reigning World champion Lorenzo Travisanutto who entered for the first time a race on the Pro Kart Raceland of Wackersdorf. In the end, the Italian driver was thrilled by the track where he extended his lead in the German kart championship with his second victory of the season. 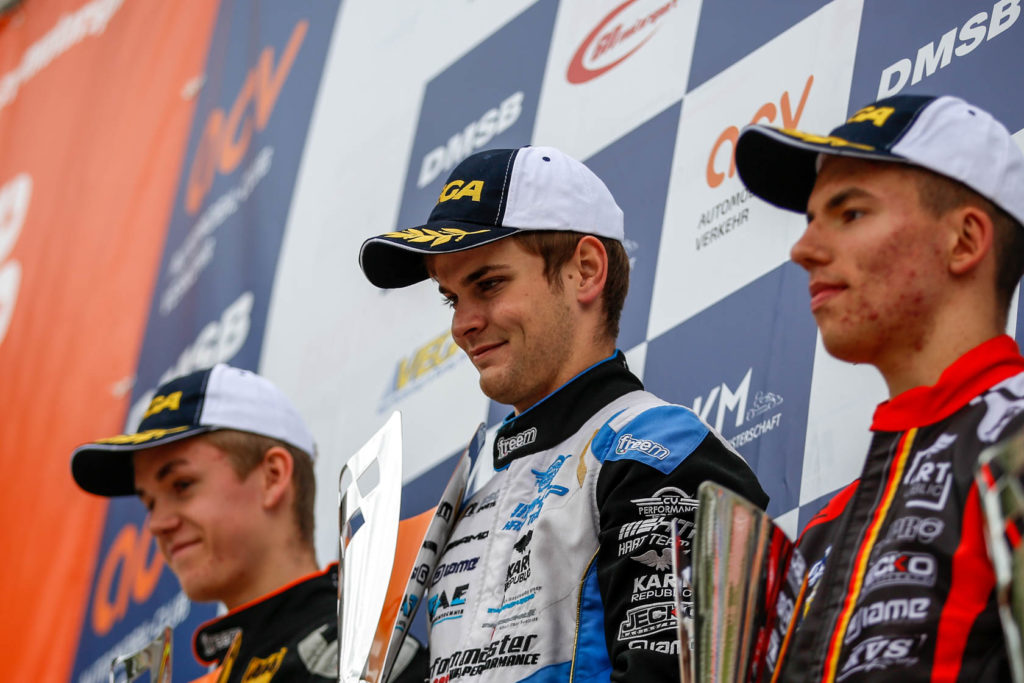 Additionally to changing weather conditions, Travisanutto had to get used to the 1.190-meter long track of Wackersdorf. “I was never here before and now I have to find a fitting rhythm,” the Italian explained before the race. 16th in Qualifying, there was still room for improvement. Already in the heats, he was ranked seventh and caught up again.

In dry conditions, the KR-pilot stormed the top of the German royal league of karting. In the first Final, he improved to the second position and closed the gap to the top. In the last race of the weekend, he then took the win to end up with the maximum points for the championship that he is now leading.

“It was a difficult weekend for me,” Travisanutto admitted. “We had to learn a lot, especially because this was the first time I drove here. Ultimately, we consistently improved and won in the end.”

“It can stay like this for the Final,” added Christian Voß. “Even though this race is still a long way, we are working hard on taking the title home.”

Next to the usual drivers, the two KR Motorsport drivers Levente Revesz and Chenyu Han started for the CV Performance Group. In the Junior class, the Hungarian driver delivered a great performance and ended the Finals third and second on the podium. His teammate from China attended the DKM and collected championship points in the first race that he concluded in the eleventh position.

Next stop for the German team, the second round of the FIA Karting European championship – OK/Junior taking place this weekend in Genk, Belgium.