The 2019 WSK Open Cup reached its conclusion in thrilling fashion this Sunday on the Sette Laghi Circuit of Castelletto di Branduzzo. The Brit Joseph Turney claimed the final victory in an OK category won by his countryman Taylor Barnard, Italy’s Andrea Kimi Antonelli took both trophies in OK-Junior while the Russian Dmitry Matveev defeated the Bulgarian Nikola Tsolov on track but not in the 60 Mini point standings! 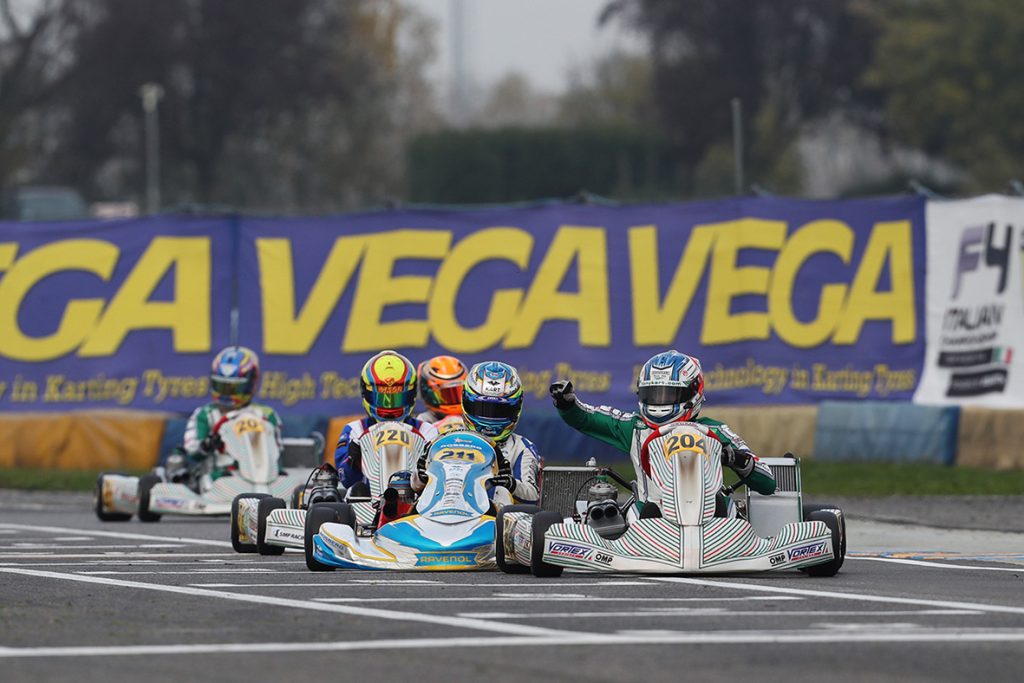 On pole after his win in the Prefinal, Barnard didn’t have the best start and fell down the field to eighth place in the opening stages of the final race, allowing Turney through for the lead, followed by Smal, Dilano Van’t Hoff (Exprit/TM), Lorenzo Travisanutto (Tony Kart/Vortex) and Pedro Hiltbrand (Tony Kart/Vortex). The next laps led to a thrilling wheel-to-wheel battle for glory between Turney and Smal, the two swapping positions before a contact at half distance sent the Russian off-track!

Turney kept his head down while having to defend against a recovering Barnard who came close to snatch the first position for 0.059 seconds on the line! Behind the duet, Smal managed to get past Van’t Hoff for the podium’s last step just two corners from the finish! Travisanutto concluded his weekend in fifth place ahead of Luigi Coluccio (Kosmic/TM), the OK-Junior World Champion Thomas Ten Brinke (FA Kart/Vortex), Hugo Sasse (Parolin/TM) and Josep Marti Sobrepera (Ton Kart/Vortex). In the class definitive standings, Taylor Barnard (220 points) wins the Open Cup for the first time in his young career, in front of Joseph Turney (188 points) and Kirill Smal (171 points).

OK-Junior: Antonelli takes it all

Following earlier successes in the WSK Super Master Series and WSK Euro Series, Andrea Kimi Antonelli (KR/IAME) added another trophy to his 2019 collection with the Open Cup, this Sunday at Castelletto. The young Italian finished second of a Final won on track my Marcus Amand (KR/IAME) who dominated the 16-lap race thanks to a stormy start before being classified in sixth place due to a penalty given by the race stewards.

Despite a strong start up to second place in the opening laps, James Wharton (Parolin/TM) was forced to an early retirement due to a mechanical issue. In the class definitive standings, Andrea Kimi Antonelli wins the title with 227 points against Artem Severiukhin at 164 followed by Martinius Stenshorne with 125.

The fight for the win in the 60 Mini class raged through the entire ten-lap Final between the polesitter Nikola Tsolov (Parolin/TM) and Dmitry Matveev (Energy Corse/TM), both winners of the morning’s Prefinals. The Russian eventually had the upper hand in the last lap and was able to keep his rival at bay, crossing the finish line with a 0.2-second gap! Gerasim Skulanov (IPK/TM) completed Russia’s Sunday success in third place ahead of Kiano Blum (Parolin/TM) and Jan Przyrowsky (Parolin/TM).

The Thai driver Enzo Tarnvanichkul (Parolin/TM) battled for the podium in the early stages but then lost momentum down to sixth at the chequered flag. Kirill Kutskov (Energy Corse/TM) concluded the Final in seventh, ahead of Cui Yuanpu (Tony Kart/TM), Marcus Saeter (Energy Corse/TM) and Maciej Gladysz (Parolin/TM). In the final point standings, Nikola Tsolov is the 2019 Open Cup Winner with 220 points ahead of Dmitry Matveev, 152, and Enzo Tarnvanichkul at 120.

Check out the final results in OK, OK-Junior and 60 Mini.

The next and closing race meeting of the 2019 WSK season takes place already next week with the Final Cup, run at night on the Adria International Raceway. An event to follow again on The RaceBox!