The WSK Open Cup is back on track this week to crown its 2019 winners. Among the 170 drivers entered in the competition of the 7 Laghi Circuit of Castelletto, the Round One winners Taylor Barnard (OK), Andrea Kimi Antonelli (OKJ), and Nikola Tsolov (60 Mini), are ready for the fight with the title in sight! 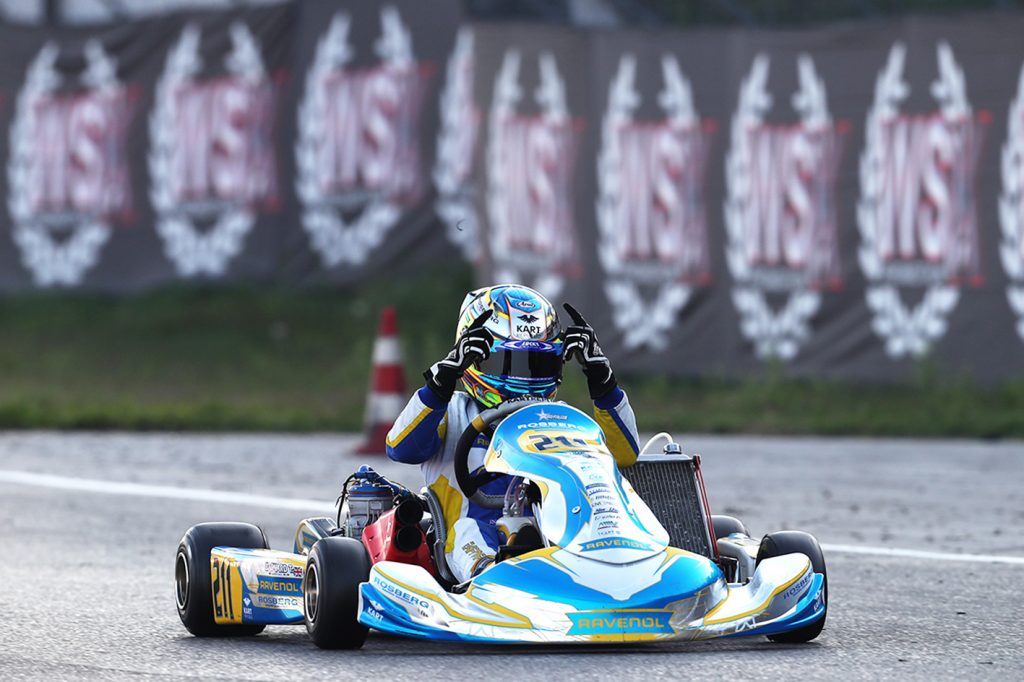 With only two rounds, the short but challenging series of the WSK Open Cup will crown further new promising talents this weekend for the OK, OK-Junior and 60 Mini categories at Castelletto di Branduzzo, as Giuseppe Palomba sealed the KZ2 title at Lonato. Each category will score points in both the Prefinal and Final as well as in the intermediate classification of the qualifying heats of every event. In the second round, the scoring for the three categories us fixed to be higher.

Giuseppe Palomba (Birel Art/TM) waited for the direct challenge against his strongest rival Giacomo Pollini (Formula K/TM) to reach his goal in KZ2. The driver from Brescia immediately launched his attack and scored the fastest time in practice. But Palomba fought back, winning all the heats and both the Prefinal and Final. Having scored the maximum of 90 points, he sealed the title of the class while Pollini, always behind him, was ranked second with 59 points. Coming from F3 and F2 series, Alessio Lorandi (Parolin/TM) made a positive comeback to karting in third place with 32 points. Equally good results for the Dutchman Stan Pex (KR/TM), fourth with 26 points, in front of countryman Senna Van Valstijn with 25 points (KR/TM).

At the end of a clean weekend filled with victory at Lonato, Andrea Kimi Antonelli (KR/IAME) is the ranking leader with 88 points. More consistent on Sunday than in Saturday’s heats, the Colombian Diego Contecha (Exprit/Vortex), comes second with 55 points while the Russian Nikita Bedrin (Tony Kart/Vortex), despite a good third place with 48 points, would have aimed for much more after his victory in the Prefinal B. His countryman Artem Severiukhin (Tony Kart/Vortex) ended the weekend with a similar outcome. In the Final, he couldn’t repeat his Prefinal A success and is consequently fourth in the provisional ranking with 43 points. Thanks to a third place in the Final, the Norwegian Martinius Stenshorne (KR/IAME) follows right below him in fifth position with 37 points.

60 Mini: Nikola Tsolov in the lead against many challengers

All 60 Mini drivers entered at Lonato proved to be very good and competitive. Nikola Tsolov (Parolin/TM) finally emerged from this large group. Successful in the intermediate ranking, then winner of the Final, the Bulgarian is topping the ranking with 87 points. His pursuers are close below, starting with the Russian Kirill Kutskov (Energy/TM) who won the Prefinal A and is placed second with 49 points. By a narrow gap, Rashid Al Dhaheri (Parolin/TM) from Emirates is third with 46 points thanks to a brilliant second position-finish snatched at the end of a very tight Final. The Austrian Kiano Blum (Parolin/TM), after reaching the top in the heats but being unlucky in the Final, is in fourth place with 39 points. Good performance for the Russian Anatoly Khavalkin (Parolin/TM) whose recovery performance in Sunday’s races granted him the fifth spot with 33 points.

Live timing & streaming (from Sunday 14:00) will be available on this website.