The First Round of the WSK Open Cup reached an epic conclusion on Sunday at the South Garda Karting of Lonato where Giuseppe Palomba (KZ2), Taylor Barnard (OK), Andrea Kimi Antonelli (OK-Junior) and Nikola Tsolov (60 Mini) claimed the win in their respective classes before heading for Castelletto di Branduzzo for the second event of the Series by WSK Promotion from November 8th to 10th. 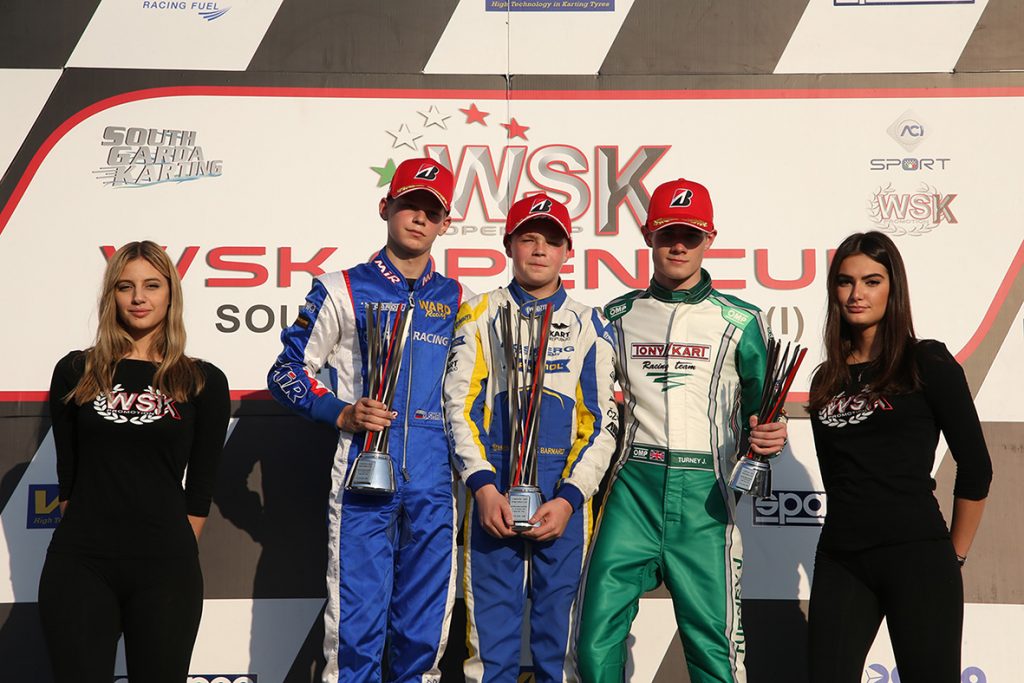 OK: Barnard gives a winning response to his rivals

The OK-Junior Final saw a thrilling finish in its last lap when Andrea Kimi Antonelli (KR/IAME) went for a move on Nikita Bedrin (Tony Kart/Vortex), winner of the Prefinal B, getting past his rival through the hairpin. As a result, the race end came down to a five-driver battle all looking for a photo finish victory. At the line, Arvin Lindblad (KR/IAME) had the upper hand but was then penalized together with Bedrin for an incorrect position of the front fairing. The victory, therefore, went to Antonelli ahead of the Colombian Diego Contecha (Exprit/Vortex) and Martinius Stenshorne (KR/IAME).

Alfio Spina (KR/IAME) made a few places up to fourth in front of Christian Ho (KR/IAME), in the top five for his maiden race with the Sauber Junior Karting Team. Lindblad and Bedrin were eventually classified in sixth and seventh ahead of Andrey Zhivnov (Tony Kart/TM), Ugo Cepil (KR/IAME) and Ariel Elkin (IPK/TM). Second at the chequered flag, Artem Severiukhin (Tony Kart/Vortex), winner of the Prefinal A, received a ten second-penalty for jump start that pushed him further down the order in 11th position.

Victorious of Sunday morning’s Prefinal, Giuseppe Palomba (BirelArt/TM) carried his winning momentum until the finish of the KZ2 Final that he took ahead of his countryman and main opponent Giacomo Pollini (Formula K/TM). In third place came the Dutchman Senna Van Valstijn (KR/TM) who was able to get past Alessio Lorandi (Parolin/TM) who still kept the third place in the class standings after Round 1.

The Second and Final Round of the WSK Open Cup will take place on the 7 Laghi Karting Circuit of Castelletto di Branduzzo from November 8th to 10th. An event you’ll be again able to follow on The RaceBox!