The 20th edition of the Rotax MAX Challenge Grand Finals found its conclusion last weekend on the Circuito Internazionale di Sarno where 360 drivers battled for a place in the ultimate stage of the Competition. In the Finals, thrilling action on track delivered one of the closest endings in the history of the Grand Finals. The deserving winners were crowned during the prize-giving ceremony before the celebration of the Event’s 20th anniversary. 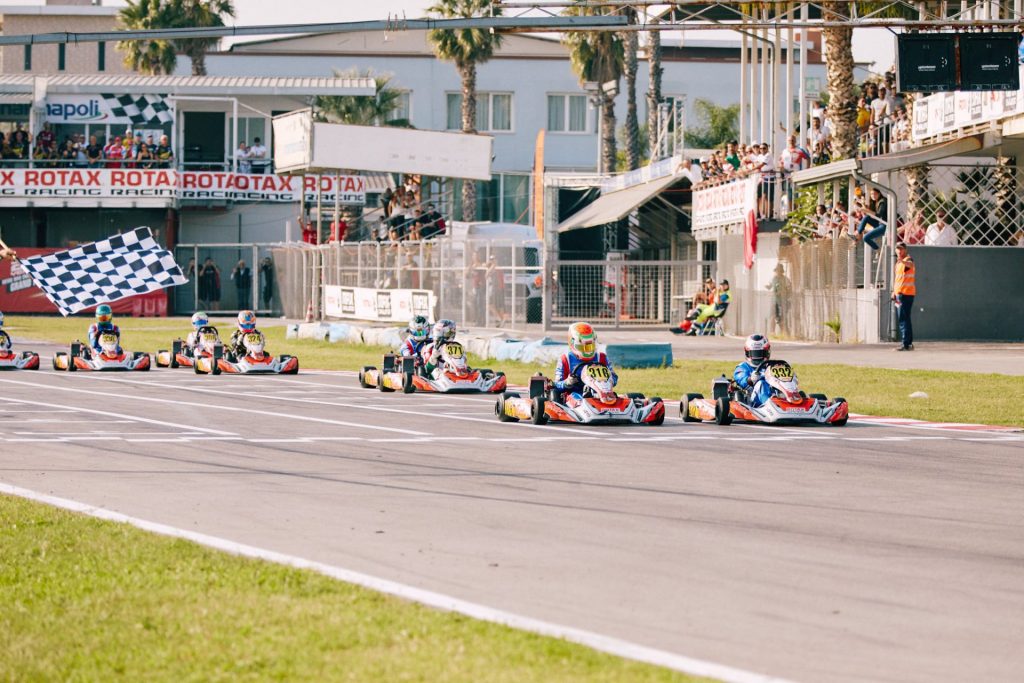 The Micro MAX Warm-up was led by Jaxson Burns (1:09.919) with Tommie Van Der Struijs coming second (1:09.986) and Lenn Nijs in third (1:09.998).  The Final lived up to the anticipated showdown on Saturday. Adam Brickley was the pole-sitter with Jay Urwin alongside him, Jaxson Burns starting from third and Macauley Bishop on the next row. Urwin took the lead followed by Bishop as the two tried to pull away from Dovydas Gudelevicius and Juliusz Ociepa. They were under pressure by lap five as Ociepa took the lead ahead of Gudelevicius and a battle for the first three positions carried on for many laps. Urwin dropped back to fourth on lap nine as the action intensified.

Dovydas Gudelevicius took the initial victory from Ociepa in second, having gained 11 places and in a drag race to the line between Bishop and Urwin, the New Zealander finishing third. However, after the race, Gudelevicius received a three-second penalty for a false start and Ociepa was penalized with ten seconds which promoted Urwin to first as the 2019 Micro MAX champion, Bishop second and Salvador Trindade third.

The first Mini MAX session of the day was the warm-up with Adrian Malheiro Sune setting the fastest time (1:05.329) before Costa Toparis (1:05.385) and Raphael Rennhofer (1:05.391). The top three were separated by just 0.062 seconds. The Finals started with Andy Ratel on pole, Jolan Raccamier on the first row. Ratel led the first few laps before Jayden Thien took over. Thien controlled the next nine laps but had Troy Snyman closing-in on him fast. By the last round, Snyman was right behind Thien and into turn 11 went down the inside to overtake. Both drivers collided and spun off onto the grass, allowing by Toparis (third), Raccamier (fourth) and Andy Ratel (fifth). A last corner lunge down the inside from Raccamier put him in the best position for the race to the line where he secured the win by just 0.023 seconds from Andy Ratel and Toparis officially. Sebastian Manson finished sixth after starting 28th on the grid.

The Junior MAX warm-up was topped by Latvia’s Tomass Stolcermanis (1:01.188) from Gregorio Bertocco  (1:01.293) and Lucas Bjoerk  (1:01.337). Oli Pylka started from pole with Charlie Wurz on the outside of the grid. Pylka led for just over half of the 17 laps with Clay Osborne and Wurz fighting for the second position. On lap 10, Wurz moved into the lead and started to pull a gap ahead. At one stage, the difference was over a second but Luca Mars, Osborne and Fedor Bykonya worked together to close in. On lap 16, Osborne fought his way into first while Wurz dropped down to fourth and was handed a start penalty of three seconds. The Grand Finals winner and new Junior MAX number 1 is Clay Osborne in front of Sacha Maguet and Jason Leung.

Elia Galvanin was fastest (1:00.187) in the Senior MAX warm-up session with Cody Gillis 0.031 seconds behind followed with Shogo Endo in third. The Final started with Vincent France on Pole position with Clayton Ravenscroft second. The Brit got off to a good start and took the lead before having to battle against the likes France, Oakley Pryer, Rhys Hunter, Ryan Norberg and Elia Galvanin. Ravenscroft led the final few laps with Guy Cunnington really riding his bumper in second. In the final lap, Cunnington overtook into turn two with Axel Saarniala and Galvanin behind. He led the final corner but Saarniala went wide to get a run. As the pair lunged at the line, Cunnington appeared to take the win by an incredible 0.003 seconds! However, the result was declared as a tie and in the absence of a camera showing a photo finish, the drivers’ fastest laps were used to name the winner. Saarniala’s fastest was 59.578 seconds while Cunnington’s was a 59.808, therefore handing the win to the Finnish driver!

The DD2 Masters’ warm-up was led by Fernando Guzzi (59.626) with Leonardo Nienkotter in second and Horacio Torres in third. Matias Rodriguez and Henrijs Grube started on the front row for the afternoon Final. A disastrous start for Rodriguez dropped him to fourth. Rudy Champion took the lead on lap two from Grube until lap four when South African Nicholas Verheul passed for the lead and continued controlling the race for the next ten laps. Lap 15 would see Rodriguez fight back to take the lead but on lap 19 Roberto Pesevski pulled a move on the pole-sitter in a hard-fought race to become the 2019 champion ahead of Champion and Rodriguez.

The warm-up for DD2 was led by Matvejs Makusins, whose best time was a 59.365. He was followed by Cristian Trolese (59.454) and Michinaga Fujiwara (59.464). The Final was another nail-biter and started with Petr Bezel on Pole position. Xen De Ruwe made an unbelievable move on the outside to pursue his seventh RMCGF title campaign although the Frenchman Nicolas Picot had other ideas and overtook him on lap six. Bezel regained the places he had lost in the early stages and continued to push hard until lap 19 of 20 when he re-took the lead and went on to win the race with Picot second and De Ruwe third.

The Rotax THUNDeR karts were first on track on Saturday morning for their warm-up session. It was Benjamin Cartery who set the pace with a 1:05.400. Jort Coone was just one-thousandth of a second behind (1:05.401) with Jasin Ferati a further 0.055 seconds off the pace. The Rotax THUNDeR (DEKM) final got underway with Ferati leading the field from Jie Kao. Bradley Barrett got past Kao on lap one for second and Joel Sturm in third. Barret set about closing the gap to Ferati but, despite making up some ground, was unable to find a way past as the leader defended. Ferati took the Final win and the championship followed by Barrett and Strum.