After 25 years in karting, Thierry Delré has decided to fulfill an old dream by creating his own chassis brand, TD Racing Kart, through a new range designed in partnership with the German manufacturer Mach1. 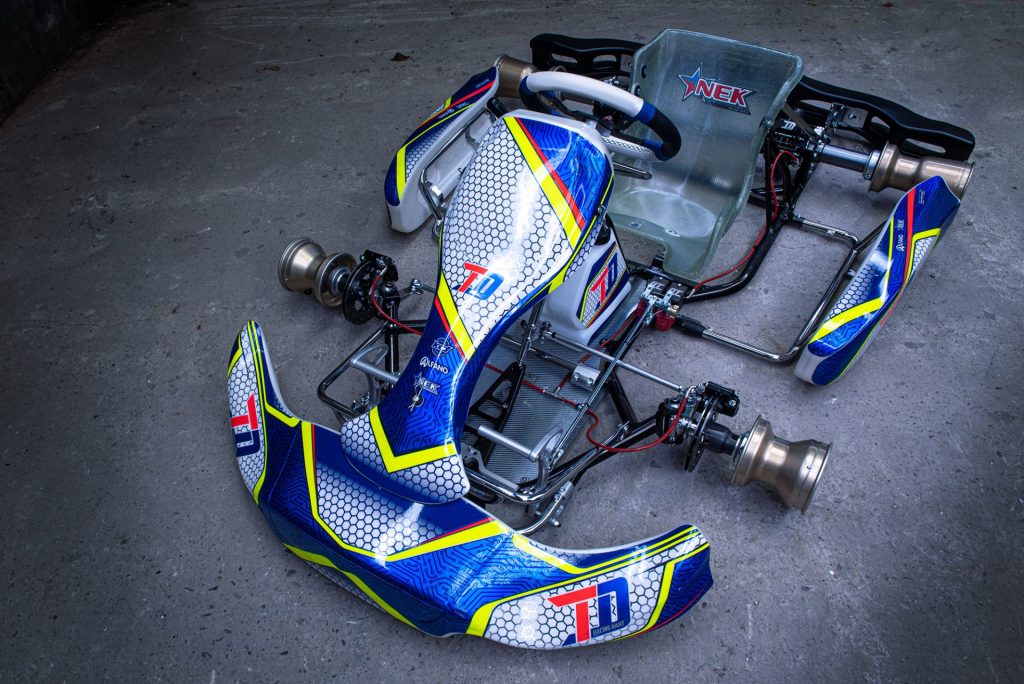 Winner of multiple titles in karting, including two Shifter victories at the IAME International Final and three titles in the IAME X30 Euro Series, but also team boss and renowned development driver; the Belgian Thierry Delré has been a busy man competing on numerous karting tracks all over Europe for the past quarter of a century.

During all these years, he’s been keeping an idea in his head but with no opportunity to make it concrete yet: create a kart chassis bearing his name. The long-awaited dream has finally become reality with the launch of TD Racing Kart, a new chassis brand created in technical partnership with Mach1. Since he first drove under its colors back in 2014, the Belgian has been building close ties with the 50-year-old German manufacturer, going from factory driver to coach, then national brand importer, development driver, and main partners’ contact person. Today, he benefits from Mach1‘s full support in the creation of a new chassis range bearing his initials.

“Building a chassis with my name on, it is an old dream coming true,” says Thierry Delré. “For 25 years that I have been involved in karting, I had this idea in mind for a while. It was a big challenge, first financially but also on the human side because, to start such a project, you have to surround yourself with the right people, which is the case today at ‘Mach1’. Since I became one of their official factory drivers back in 2014, I have received a lot of help and our partnership has been reinforced for the past two years as I am now in charge of chassis development while being the main contact person with the international brand importers. The company has invested heavily in chassis development for several years and the work done is paying off with a very good current level. This naturally let our boss, Mr. Hetschel, to consider new challenges like launching a new chassis type complementary to the current range. It was the right time because I have always been a perfectionist and this project is a reflection of my philosophy of always doing better in the name of performance, not to mention the passion that goes with it!”

Partially developed from the Mach1, the TD Racing Kart chassis, however, offers some technical variants in the likes of the seat supplied by NEK, the braking system developed in partnership with the multiple karting World Champion Danilo Rossi, stub axles and a tubular structure featuring a different strength as though through by Delré who spent countless hours extracting the new package’s potential on track. The TD Racing Kart chassis is available in two types for the 2020 season: the first for gearbox categories (KZ, X30 Shifter), the second for drivers wishing to compete in X30 Senior and Junior classes. 15 chassis are already on sale and will each benefit from a joint homologation with Mach1 to be fully admitted in the above-mentioned competitions on a national and international level.

“First, the goal is to make our chassis available mainly for the IAME series like in the Benelux, France but also the Euro Series and the International Final of Le Mans,” explains Delré. “But, in the short term, we hope to extend the brand and grow the drivers’ interest, for example, in KZ series in France but also in CIK-FIA competitions on an international scale. It is a project that requires a step-by-step approach but the ambition is to eventually demonstrate that our equipment can fight with the big factories. This is a challenge but I know that we are able to take it up in the light of the on-track tests conducted so far, including those in official races. From a performance point of view, I feel confident, especially as ‘Mach1’ chassis have already proved their value in gearbox categories. What matters after is to get the interest of more and more drivers and eventually make a name for ourselves in the ‘direct-drive’ classes.

Find more information about the TD Racing Kart chassis on the official Facebook page or by contacting Thierry Delré via 0032 (0) 472 93 76 71.