The final day of the 2019 ROK Festival at Biloxi was as hot and humid as any, but racers were ready to take on the adversity and the competition shined on track. Many of the victories came from drivers not on the Pole position, making for an exciting day to cap off the first competition karting event at the Finishline Performance Karting facility. 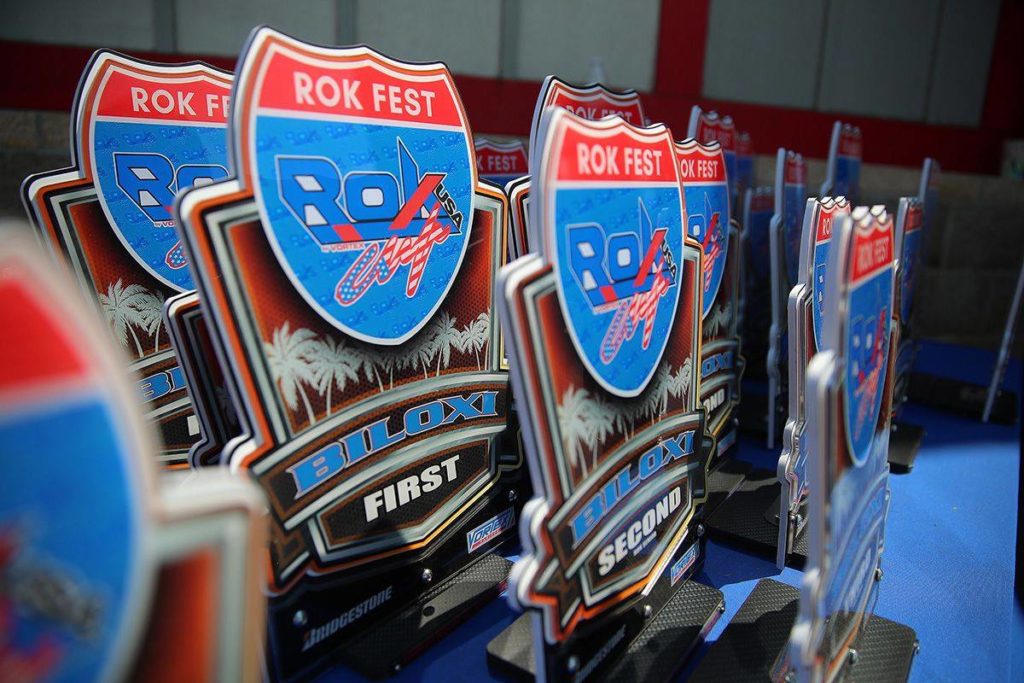 The city of Biloxi showed their support with trackside food and beverage vendors, a full staff of medical and fire emergency team members, and dozens of local onlookers amazed at the speed and professionalism of the drivers.

Six new members were added to the ROK Cup USA team for the ROK Superfinal in South Garda, Italy later this year. Those driver include: Danny Formal, Arthur Leist, Dale Curran, Liam Flanagan, Ryan Kinnear, and Danilo Ramalho. The remaining podium finishers in their respective classes were awarded free entry to the ROK The Rio event at the end of October in Las Vegas — a total of 21 drivers.

Danny Formal (Leading Edge / Formula K) scored the victory in Shifter ROK after a dominating drive from fifth on the grid. The Costa Rican had been fast all weekend but had to overcome a broken chain in Heat 3 before taking his first major win of the season. Mathias Ramirez (PSL / Birel ART) would finish second after grabbing the holeshot and early lead. His PSL Karting teammate, Davide Greco, trailed well behind in third after having his hands full with Vincenzo Sarracino (TB Kart USA), Rory Van Der Steur (Team Felon / Tony Kart), and Jimmy Cabrera (AKT / Kosmic) throughout the 20-lap final.

Like Formal, Brazilian Arthur Leist (PSL / Birel ART) broke through for his first major win of the season after a hard-fought battle with Winter Tour Champion, Christian Brooks (Orsolon / Tony Kart). The two drivers looked poised to fight to the final lap, but Leist broke away late to seal his fate as ROK Fest Champion and member of the ROK Cup USA ROK Superfinal team. Brooks came up short but continues to shine in ROK competition with Orsolon Racing. Diego Ramos (HR / Tony Kart) overcame a DNF in his final heat, climbing four positions and a 2-second gap down the stretch to pass Axel Cabrera late to grab the final podium spot.

Luca Mars (Speed Concepts / Tony Kart) adds yet another win to his season after a last lap pass over Canadian Dale Curran (REM / Kosmic). The two drivers had broken away late in the race and Curran made a defensive drive into the turn one hairpin. The move did not pay off as Mars took advantage of the lost momentum of Curran’s Kosmic Kart and dove underneath on the exit. Mars drove his Tony Kart home over the final 16 corners to win. Curran finished second and  — because Mars already has a ticket to Italy from his Winter Tour Championship — earned a return trip to South Garda in the process. Floridian Joey Atanasio (REM / Kosmic) finished third, having made it into the lead for a portion of the 20-lap final before an overheating engine forced his kart to fade down the stretch.

Though it wasn’t an easy weekend, Kai Sorensen (Supertune / Tony Kart) takes home another win in Mini ROK after pulling away from what was a tight race for most of the final. Sorensen’s Supertune USA teammate, Enzo Deligny, led the early going of a 16-lap final, but Sorensen took over three laps in. Both Deligny and Liam Flanagan (Tanda / Praga) remained in tow for 13 consecutive laps until Flanagan was able to pass Deligny on the final lap for second. Meanwhile, Caleb Gafrarar (PSL / Birel ART) had been carving through the field after a tough Saturday of heats had the young North Carolinian starting from 12th. Gafrarar had made it to fourth just past halfway and the dice-up between Flanagan and Deligny allowed Gafrarar an opportunity for third on the final lap. The move resulted in a penalty that sent the Birel ART driver back to fifth, behind Michael Costello, in the final tally with the fastest lap of the race.

The holeshot from outside pole for Ryan Kinnear (PGR / Ricciardo) was the advantage the Texan needed in Shifter ROK Master. The Phil Giebler Racing driver ran comfortably out front of Costa Rican Juan Ignacio Perez (HR / Tony Kart) for the entire 20 laps to secure the win and the ROK Superfinal ticket to Italy in October. Polesitter Peter Licciardi (TB Kart USA) struggled in the early going and had dropped to fourth at one point before rebounding to finish on the final step of the podium. The New Orleans resident set the fastest lap of the race and was left wondering how a better start to the race would have changed his fortunes.

It was a flag-to-flag win for Brazilian Danilo Ramalho (HR / Kosmic) who drove out to a 5.5-second advantage over Vatche Tatikian (PGR / Birel ART) in 20 laps. Timothy Meyer (Leading Edge / Kosmic) ran uncontested in third. Ariel Castro, who had been the closest rival to Ramalho throughout the course of the weekend, retired on lap one with a mechanical issue.

Carson Weinberg (Nitro) led all but two laps in the 16-lap feature event in Micro ROK on Sunday, as the young Georgian cruised to a 3.7-second victory over Oliver Wheldon (JC / Kosmic). Polesitter Kai Johnson (AKT / Energy) did not have things going his way on Sunday, dropping to fourth before rebounding to third after Salvador Dellaveccia (AM Racing) retired with three to go.

Chloe Chambers (MDR / Kosmic) was a force in the 100cc Junior category ever since qualifying, winning three heats and running away with the 16-lap final on Sunday. The New York driver has solidified herself as a top 100cc driver in the country after her Florida Winter Tour Championship earlier this year. Tanner Garvin would cross the line in second but was assessed a two-position penalty for a starting infraction, moving Camryn Reed and Granger Perra higher up the podium in second and third.

Alexander Searle (MGM / Kart City) had no problems moving up to LO206 Senior this weekend after a fantastic Winter Tour in Junior. The Floridian closed a 2-second gap on Dylan Amundsen (DP / MGM) in just five laps, grabbing the lead on lap six and maintaining his distance to the #136 kart for the remaining 11 laps. Zach Linsell (MGM / MGM) filled out the podium in third.

All 16 laps were led by Corry Sam in the Junior LO206 program after polesitter Camryn Reed fell well back on the opening lap. Granger Perra was never more than 2-tenths of a second behind Sam but never could find an open door to make the move into first, finishing second. Reed fought back to finish third after falling all the way down to sixth.

Over the weekend, ROK Cup Promotions announced the second ROK Festival of the summer slated for Labor Day Weekend, August 29 – September 1, in Amarillo, Texas at the Amarillo Kart Circuit. More information will be forthcoming as the Vortex ROK platform hits the Lone Star State.