The Leclerc By Lennox Racing Team returned from the First Round of the Champions Of the Future series at Zuera with another victory in the pocket, always in the OK category. The success, this time, was achieved by Jamie Day who dominated with great determination a truly fierce line-up in a Final without a breather! 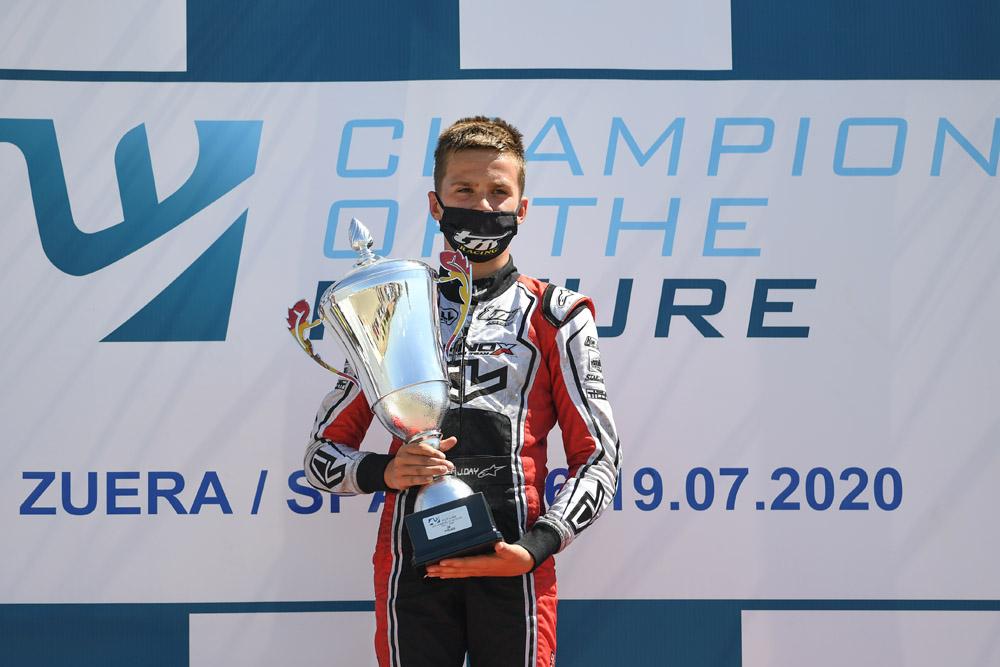 Beyond the second victory in a row after Gray’s success in Sarno in the First Round of the WSK Euro Series, the team led by Jordon Lennox-Lamb achieved an outstanding and high-level fantastic performance which clearly reflected the excellence of Charles Leclerc chassis, manufactured by Birel ART, and with the TM Racing engines, even on a demanding track during an event characterized by high temperatures.

Jamie Day’s Champions Of The Future began by setting the sixth-fastest time in Qualifying and continued with a faultless race conducted in the heats. The “take-home” at the end of the day on Saturday was one of the fastest laps, two wins, a second and a fifth spot which provided him the second position in the rankings. Lastly, the final victory was preceded by the first position conquered in the Prefinal in the morning.

A streak of results certainly within the reach of Oliver Gray, although the Englishman was forced to implement an emergency maneuver to avoid being involved in a collision in the last heat, thus losing positions. In the Prefinal, Gray managed to get into the Top Ten, but once in the Final, he could not avoid getting caught up in the battle for the spots immediately following the leading positions. The Englishman, therefore, didn’t have the opportunity to show his pace, not far from his team-mate as his victory in the heats demonstrated.

In Zuera, the OK-Junior drivers Rafael Modonese and Ivan Domingues continued to reap the benefits of the progress they have accomplished so far. Domingues gave an excellent performance in the Qualifying Heats, at the end of which he recovered 14 positions in the rankings, also thanks to two results in the Top Ten, the best of which was a seventh spot. Even Modonese managed to get close to the Top Ten several times, yet a penalty obtained in the last heat forced him to take the Second Chance Heat where, unfortunately, he did not reach the finish line due to contact with another driver.

Domingues, on the other hand, continued his path lining-up at the start of the two decisive races and, in the end, the Portuguese completed an brilliant 10-position comeback in the Final. A performance to be praised even if the result was tight because it was influenced by the post-race penalty imposed after the Prefinal.

With the first round of Champions Of The Future coming to an end, the Leclerc by Lennox Racing Team will now take advantage of the experience gained to prepare for the opening meeting of the FIA Karting European Championship OK/Junior, scheduled at the Circuito Internacional de Zuera in two weeks.