From being the youngest World Champion of Karting to becoming F1’s next big thing, Lando Norris hasn’t wasted time on the road to the summits of motor racing. But stellar rise and ease don’t always go hand in hand as the 18-year-old Brit looks back on his early years in karting and the challenges he has faced climbing through single-seater series. 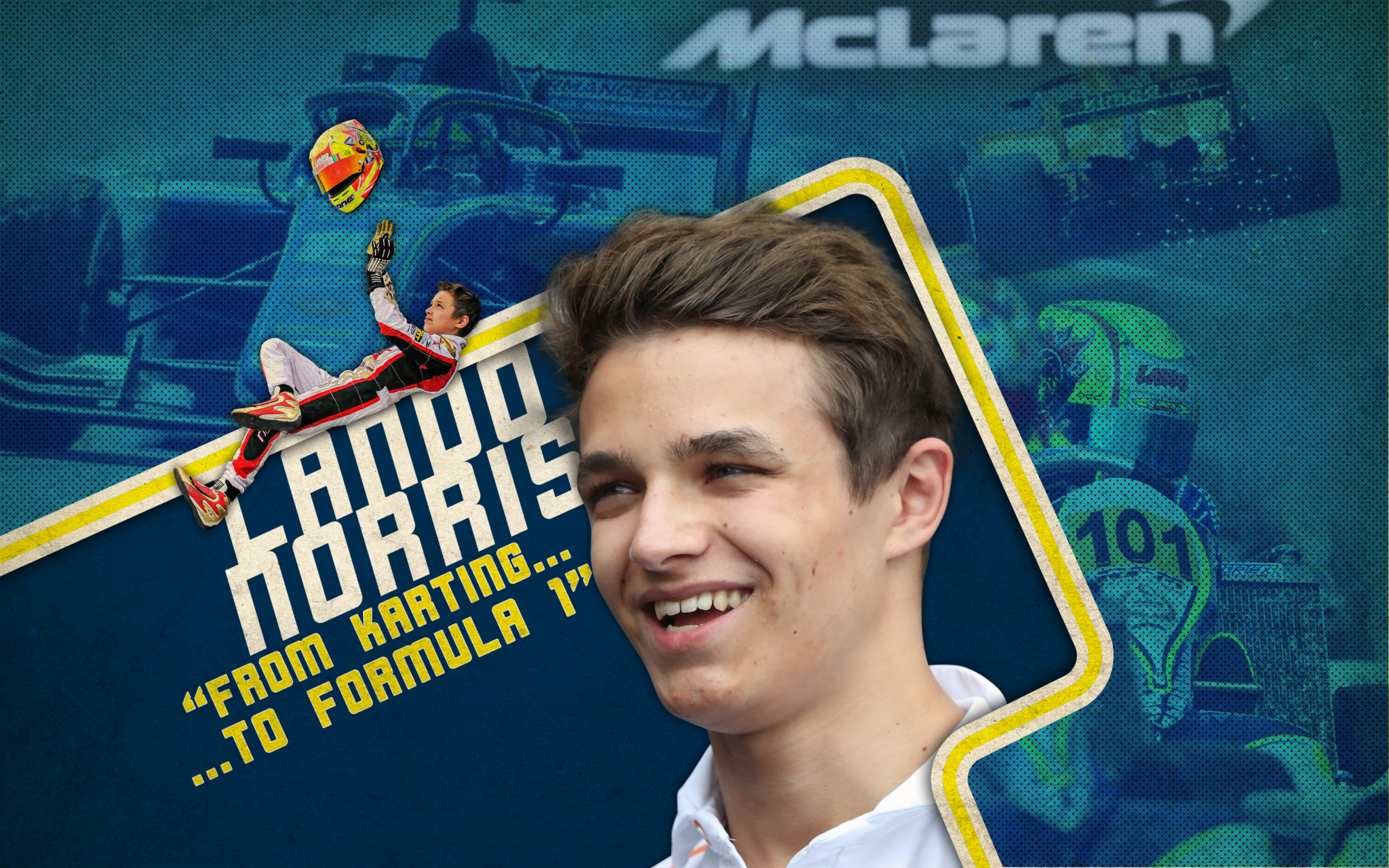 Can you talk us through your early years in Karting?

I started doing karting in 2008 and practised for a year before entering the British Championship. It wasn’t for winning but more to experience what it’s like against the top guys. The third year took it to another level at a time when I was trying to go racing as much as I could.

In Cadets, which I stayed in for four seasons, I didn’t win any big races but one in the British Open Championship. It was the only race I won so it wasn’t like I started amazingly well but, then, things got better and I went to Mini Max, won it and did the Euro Max in the same year, in Juniors. I did pretty well with a podium in Wackersdorf, two wins in Salbris and Genk.

At the same time, I was doing the British Championship at home. It was all about doing more racing and going against the tough guys out there. Then, I took it a step up in KF3 driving for Ricky Flynn Motorsport in different championships. I almost won them all and I remember that nice victory in Bahrain, very good track and location.

In KF2, I did not really win anything apart from the Worlds [laughs]! But, in general, I wasn’t amazing even though I did ok in the Europeans. I was leading the rankings in Genk then my engine ceased, which did not allow me to win the championship. That was a tough year but, in the end, winning the Worlds was the best thing I could do. I also competed in Ginetta, which offered me a good transition from karting to go straight to Formula 4. Those cars were really good for me to learn about car racing. I had a really good year as well as doing the karting. But doing Ginetta made me learn about car control in a race weekend and, obviously, you have a lot more bits to change on a car than a kart.

What did that period bring you in terms of know-how in motor racing?

In Ginetta, you learn about the basics of a car like spring and how they work. Then when you get into single-seaters, you learn more about roll bars, aerodynamics. In 2015, I won the F4 championship and it was again a very good year learning about everything in car racing. And it pretty much set me up all the way to today, learning more and more every year.

Apart from Formula Renault, most of my progression has been mostly with Carlin so I already knew everyone. For example, my engineer in F4 became my engineer in F3 and now he’s with us in F2. He has really helped me going all the way, taught me a lot about the car set-up. A lot of this has been about improving myself, my feedback and how to improve the car, which is very important in car racing because you only have one teammate. Especially when you get to Formula 1. That’s probably the first series when everyone is in a car designed for himself. All those drivers are willing to be on top of their game and car, improving the team, which I think you learn more and more by climbing the ladder. I’ve been in motor racing for ten years now and halfway through every season I’ve done, I was always testing for the next. In cars, you can’ do that so much but in karting, when I was in Juniors, I was already starting testing Seniors to prepare myself.

What challenges did you face in karting? How do they differ from single-seater categories?

I think the biggest difference from karting to cars is the physical aspect, where I was not good enough, and being able to take the step from karting, where I was pretty small and not maximizing how I was physically, to formula cars. It gets harder and harder every year from F4 to F2 before being easier in F1. I think the biggest challenge is really to prepare yourself physically to step up to formula cars.

Then, there’s the knowledge. How you understand the set-up of the car and which things can help it. If you’re in qualifying and run with loads of oversteering, you need to be able to ask for less or more rear wing, changing the bars, etc. You already have a bit of that in karting.

So, it gives you a bit of study but, after, it’s a big step to Formula cars, being on top of everything. You can know small amounts but I think it’s important to get on top of as many things as you can to acquire the knowledge. That gives you a big advantage over a lot of other drivers. The physical aspects and knowledge are the two biggest things to get used to.

How physical in the transition from karting to F4?

It’s physical but in different areas. The biggest thing in karting was the work on the neck and the arms. The brake force on the general body was ok but going into F4, the steering gets more difficult. Every time I took a step up, it gets harder and harder with more downforce. That continues through cadet and Mini 60, then KF3, KF2, OKJ, OK. It’s a similar sort of thing with the speed in corners that gets higher physically and becomes tougher. But then it takes a bit more of a step in terms of neck and arm strength

How do you approach tire management in karting compared to other series?

In karting, there was never really some tire management. In qualifying, in terms of maximizing the tires and the performance, it’s a similar thing to cars. You have new tires, you go out, warm them up and you have about two laps to maximize the grip to do your fastest lap times.

When I was karting, I was more comfortable with a certain type of tire. They were the most similar to cars. When they were new, they had a lot of grip and they also degraded a lot, so the running of those tires gave a pretty good feeling on how they would be in cars. It’s about maximizing them in qualifying and in the race they go away slowly. I think you learn already a small amount in karting but then when you go to cars, it happens in a slightly different way in terms of how you save them. There’s the brake balance you can adjust in order to save the front or rear tires.

Also, when you follow other cars, you lose downforce so that makes the racing a bit more difficult than in karting where it’s very easy to stay behind a guy for long without wasting your tires. The qualifying is also more important in cars than it was in karting. In cars, you don’t have as much free time as you would like and you have a negative thing when you get close to another car. That is something I wasn’t so good at straight away, the overtaking aspect of car racing and understanding in which area to push or wait to overtake a car. Karting was always easy, you could push everywhere and try to catch the guy.

In cars, you struggle a bit more in high-speed corners following someone else but at low speed, you can really push and catch him. In terms of overtaking, both car racing and karting are quite similar but getting to that point is always much more difficult in car racing. Getting to the point of him having to defend, run wide under the pressure.

In terms of global management, how much would you say you push during a race?

You can never push or pushing to the limit in a race is up to 80-90%. In qualifying, you can generally be close to 100%. But in a race, one small oversteer and your tire can lose almost half of its rubber. The temperatures go up and then the degradation goes up too, it becomes a spiralling effect and it gets worse. It takes a lot of time to get used to this.

I think in karting, we are used to pushing for not that long of a race. It gets more physical in car racing and the races are longer, the temperatures are a lot worse in the cockpit. These are all the things you really need to prepare yourself for when driving in karting.

What are the challenges outside of the cockpit as a racing driver?

I don’t how much things have changed but back in my days of karting, you already had to do a bit of TV and the cameras were there. Obviously, it increases when you get into other series with more publicizing on TV and you spend a lot more time with journalists asking you questions. As well as with sponsors, you get to spend time with them, their guests. When you get to F1, it’s a lot worse.

How does that media attention affect you?

Sometimes, it’s not so bad but there are other times, if you have a bad weekend, you just never want to do it. But it’s something you have to deal with, divide your day between the time you spend in the car and the rest of it dealing with all the media stuff you need to get over with. In general, in car racing, you have a lot less time on the track than in karting where you have all the Heats, Finals, etc. With cars, you also have very little testing, so in a way everything gets hard but a little easier at the same time.

Thank you Lando for your time and good luck in F1 driving for McLaren!