Sunday’s X30 Mini Final produced another nail-biting showdown for victory between the youngest drivers competing in the IAME Winter Cup by RGMMC on the Internacional Kartodromo Lucas Guerrero of Valencia. Suspense remained through the 15-lap race won by Jan Peral ahead of his teammate at Monlau Competicion Sandro Perez. Leo Robinson (Fusion Motorsport) reached his second podium in a row after 2019. 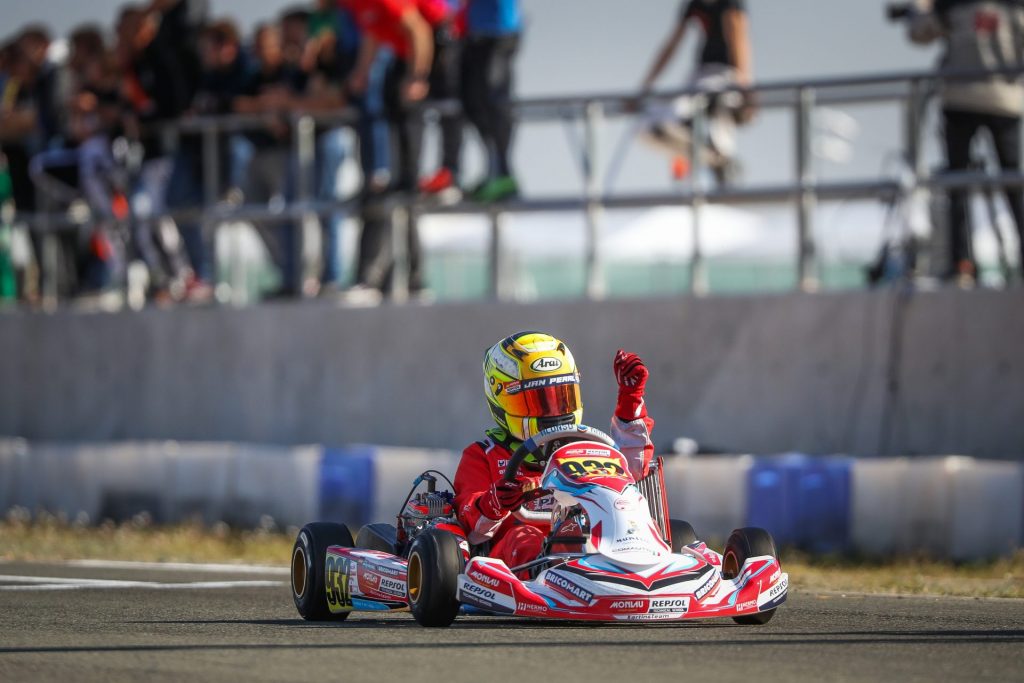 The final race of the weekend in X30 Mini delivered another intense racing spectacle under the sun of Valencia. From green light to finish, the Final’s outcome remained highly uncertain until Jan Peral (Monlau Competicion) managed to escape from his pursuers in the very last lap on his way to becoming the third different Spaniard in as many years to win the IAME Winter Cup. Sandro Sanchez Perez (Monlau Competicion) reached second place in front of Leo Robinson (Fusion Motorsport) stepping on another podium after his 2019 performance in Mini.

From third on the grid, Peral had the fastest start in front of Santiago Alves (Nuno Alves) and Robinson while Perez, who started from pole position after winning the morning’s Prefinal, fell down to fourth. The four drivers quickly isolated themselves from the rest of the pack where Alex Martinez (Praga Espana Motorsport) was put under pressure by Hugo Marti (ETMC Motorsport).

While battling for third place, Robinson and Perez started working towards a common goal: close the gap on the leading duo. The strategy paid off on Lap 6 where they both made their move on Alves. The Portuguese driver fought back for second place, pushing Robinson down to fourth in a thrilling switch of positions ongoing until the last of the 15 laps!

Having made his way back to first position a few corners from the flag, Peral was rewarded with the final victory, his first in the IAME Winter Cup in front of his home crowd! Behind the Spaniard, Perez went for a last overtaking move in the chicane and denied Robinson his second place while the tiny spaces left in the last corner forced Alves off the track. He crossed the line in fourth ahead of the Brit Lewis Wherrell (Oliver Rowland Motorsport).

Find here the full classification of the X30 Mini Final.