Bart Harrison (Mick Barrett Racing) claimed his first victory in the IAME Winter Cup, this Sunday on the Internacional Kartodromo Lucas Guerrero of Valencia, by defeating Aaron Walker (Strawberry Racing) and Freddie Slater (Fusion Motorsport) in the last lap of a thrilling X30 Junior Final! The latter was eventually denied his result due to a penalty, which promoted a recovering Oli Pylka (Dan Holland Racing) onto the podium’s third step. 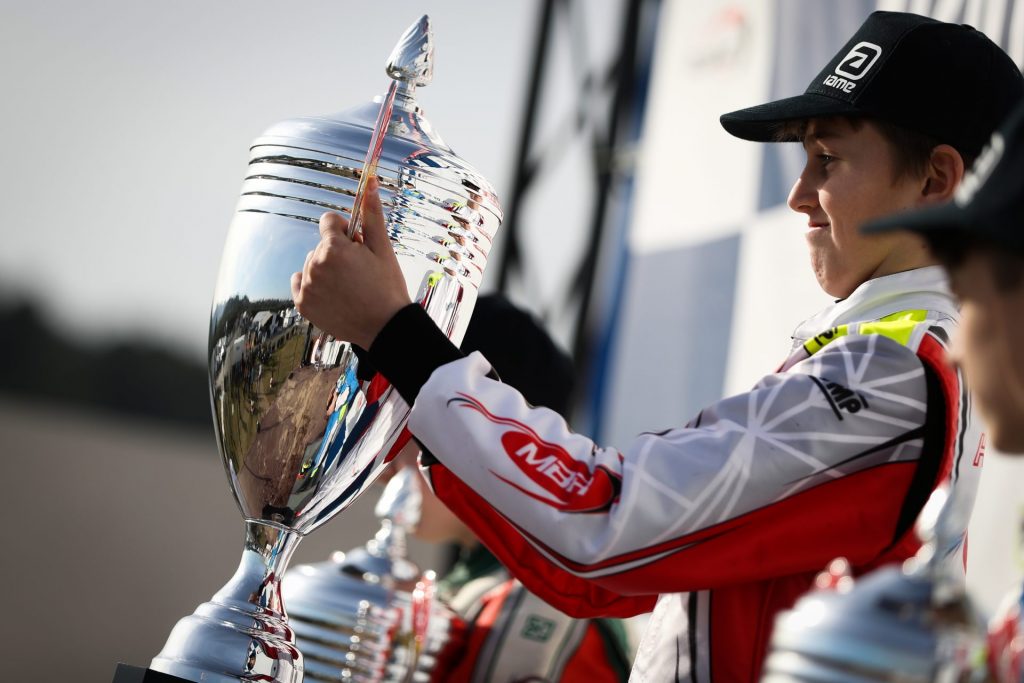 Wheel-to-wheel battles, multiples leader changes, dramas and a winner emerging just a few meters from the finish line: the X30 Junior Final had all the ingredients of a thrilling racing piece, this Sunday afternoon at Valencia. Bart Harrison (Mick Barrett Racing) fought hard until the very last corner of the closing lap to clinch victory, ahead of Aaron Walker (Strawberry Racing) and Oli Pylka (Dan Holland Racing) who repeated his 2019 performance.

As the 36 Juniors were given the green light for their 17-lap Final, KR-Sport drivers looked in control with Alfie Rigby having an impressive start from fifth to first, ahead of his teammate Daniel Guinchard who started on pole after winning the morning’s Prefinal. Walker kept his grid’s third rank in front of Slater climbing from ninth. The Brit, who was denied a second-place finish in Prefinal due to a penalty, overtook Walker for third place, later followed by Harrison.

As the race reached its halfway point, the leading order started shaking when Guinchard and Rigby attacked each other until Lap 10 when Slater, observing from third place, broke through an open door and climbed a position further, immediately imitated by Harrison at the expense of Guinchard falling down to fourth. Walker, in fifth, chose a similar moment to make his way back into the lead.

On Lap 14, drama struck when Guinchard and Rigby hit each other and dropped down to sixth and 12th respectively. At the same time, Walker, Harrison and Slater kept spectators on the edge of their seats in an exciting wheel-to-wheel battle where none of them was ready to back down. In the lead when entering the last lap, Walker kept Slater at bay until the last chicane where the British driver tried to force his way through, which opened the door for Harrison who passed them both in one move, just a couple of meters from the finish line!

Walker had to make do with second place while Slater, third at the flag, lost the podium due to a post-race penalty for a maneuver deemed incorrect by the Officials. Oli Pylka was, therefore, promoted to third place after climbing from 10th on the grid, ahead of Slater and Edward Pearson (Strawberry Racing).

Find here the full classification of the X30 Junior Final.