The 2019 FIA Karting World Championship – OK / Junior, held last weekend on the Miko Salo Circuit of Alahärmä in Finland, didn’t meet VDK Racing’s ambitions in terms of track results despite the strong pace showed by its eight drivers entered in a competition made difficult by capricious weather. 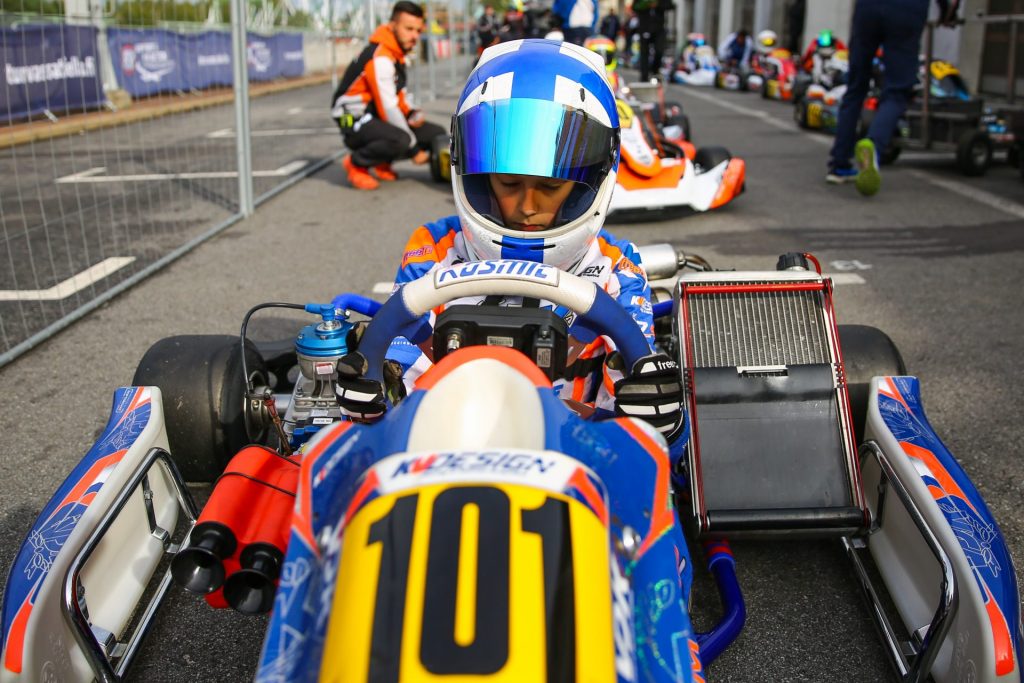 Unlike the previous season marked by the World Junior title of Victor Bernier at Kristianstad, the 2019 edition of the peak event in the FIA Karting calendar didn’t unfold the way VDK Racing had hoped for. The Belgian team entered eight drivers, two in Junior and six in OK, at the Powerpark Circuit of Alahärmä.

In the Junior class, Marcus Amand, the recent winner of the European Championship at Le Mans, was the center of many’s attention, joined in the category by Suleiman Zanfari. After two rainy test days, the track conditions improved for Friday’s Qualifying where Suleiman and Marcus took respectively the 25th and 36th fastest lap times out of 104 participants! Zanfari kept his pace on a high the next day by finishing his opening Qualifying Heat in eighth place with the fastest lap. A good start followed by a second more complicated run before concluding with fourth and sixth positions on a track made again tricky due to heavy waterfalls in the middle of the afternoon! Highly-motivated heading for Sunday, the young Moroccan finished 11th and was on his way to the Final before an incident with another driver in his sixth heat put an end to his qualifying hopes for the ultimate race that he missed for ten points!

From the sixth grid row, Marcus Amand kicked off his qualifying races with a 14th position before the local weather made it even more difficult in his second race, also concluded in 14th place followed by an encouraging seventh position. On Sunday morning, Amand took a dizzying start in his fourth heat and drove through the field from 11th to the 1st place in the opening lap before a series of incidents on the still slippery tarmac forced the race to be red-flagged. Virtual leader before the restart, Marcus was then penalized for a misunderstanding on track before he eventually retired. Determined to make up for the deception, he took the fifth place in his penultimate round but then lost ground in his final race. Despite an excellent pace that placed him among the fastest but not helped by the changing conditions, Marcus saw his weekend come to a premature end at the Final’s gates.

In the OK category, Sami Meguetounif showed a strong pace as early as Friday’s Qualifying where he took the 15th best-time out of 88 drivers and started his Saturday on the right foot with a fifth position before the rain and treacherous conditions prevented him from maximizing his other opportunities. Fourth in his last race on Sunday morning, the young Frenchman qualified for the Final where, on a track at last completely dry, he made good use of his skills and pace, with the fourth-fastest lap time, and climbed from 26th to 14th place! Despite an up-and-down weekend, Thomas Imbourg also made his way within the Top 34. After setting the 25th fastest time on Friday, he reached three times the Top 10 of his heats, including a strong third place, and crossed the Final’s finish line in 23rd position.

The other VDK drivers in the senior field went through mixed fortunes in Finland, like Loris Cabirou whose start of the weekend turned out to be complicated in Qualifying before he found his rhythm in the heats overtaking many rivals. A determination on track left unrewarded as Loris eventually missed the final step. Because of tool use by a mechanic while on the pre-grid in Qualifying, Frank Chappard was pushed back to the grid end. An early setback that would not weaken the French Champion‘s hunger for results as he made up 54 positions in all of his heats, including a Top 10 finish! An impressive tally that still wasn’t enough to qualify for the Final after a less happy result in his last heat race.

Luck wasn’t either on Tom Uzan’s side, despite showing a constantly-improving pace that enabled him to recover lots of positions in his heats, while Oliver Goethe won’t keep a long-lasting memory of his World Championship weekend in Alahärmä where versatile weather didn’t help him find his marks the way he would have liked around the Mika Salo layout.

“No regrets,” says Eric Verdaasdonk, Team Manager of VDK Racing. “It was a more difficult weekend than expected for everyone but, in the end, I am very happy with the progress of our drivers. Both in Junior and OK, the performance was there all weekend but with such conditions, every race can quickly turn into a lottery! I still regret a little bit the choice of the circuit, very narrow with very few overtaking possibilities, which did not help us. That’s something we had already noticed during our preparation, at the Finnish championship, and it was confirmed at the Worlds but what can you can do? We can still be satisfied with the work done, thumbs up to everyone in the team, I can’t wait for next year already!”

In a sport as unpredictable and competitive as karting, beneath any complicated weekend lies lessons to be learned in order to come back stronger. Having won the French FFSA OK title followed by the FIA Karting European Junior Championship, VDK Racing looks back on its 2019 season with pride, already working towards 2020 with the clear ambitions not only to keep its current trophies but, especially, to conquer back the World Championship crown!