Three drivers on the podium, a title of champion: VDK Racing showed once again great competitiveness last weekend at the Le Mans International Karting Circuit where Franck Chappard and Sami Meguetounif (OK) and Marcus Amand (OK-Junior) ended up amongst the best with the Belgian team winning its third consecutive French OK title thanks to Chappard, just a few days before the European Championship Final on the same track. 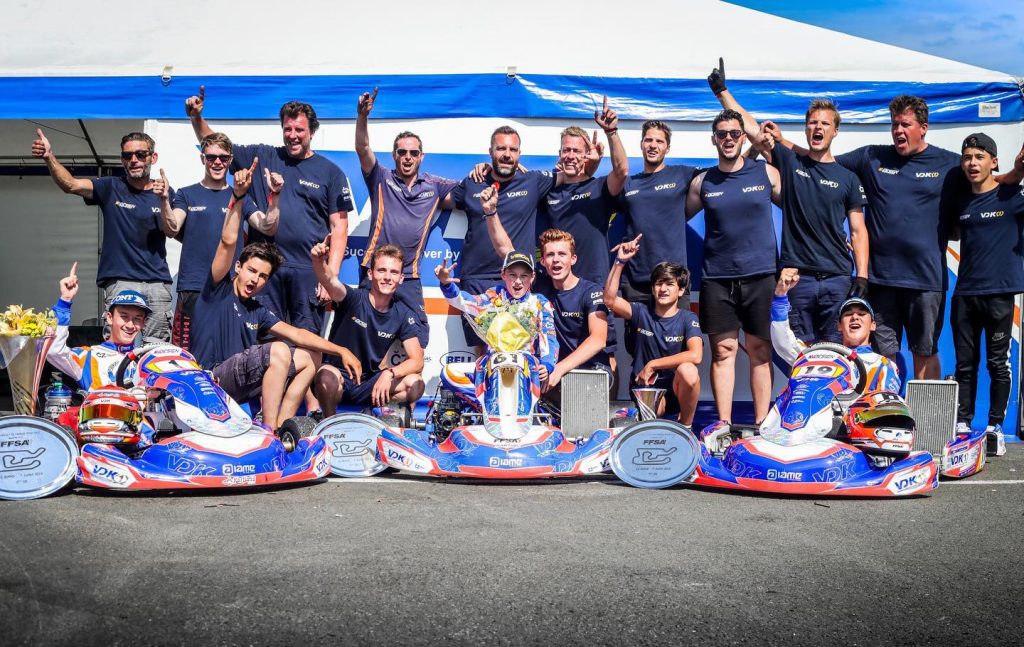 VDK Racing entered eleven drivers last weekend in Le Mans where sunny weather and high temperatures built the scene for the Final Round of the French Karting Championship for the OK category organized with the FFSA Coupe de France for the OK-Junior class.

In OK, Franck Chappard showed talent and consistency all weekend to win his second national title, the third in a row for VDK Racing on French soil! Fifth-fastest in Qualifying, Franck climbed up to third after the heats, then took a similar result in the Prefinal. From the second row of the grid, the French moved to second position at the start where he settled for the duration of the 22 lap-race, knowing it was enough to be crowned champion, ahead of his teammate Sami Meguetounif. After a difficult Qualifying, the young Frenchman made progress in the heats and qualified fourth on the final grid. Despite losing some ground in the opening laps, Sami made good use of his strong pace and finished on Chappard’s tail at the chequered flag. A strong performance that gave him the third place in the class standings!

In the same race, Oliver Goethe climbed from 17th on the grid to a deserving eighth position after what had been an up-and-down weekend. 29th at the start, Tom Uzan also gave the public a splendid recovery race up to 13th position, two places ahead of Thomas Imbourg. Despite a difficult event concluded with a final 19th position, Nicolas Picot has classified fourth in the championship thanks to his podium at Angerville. Loris Cabirou, 14th on the grid, saw his Final come to an early end while Ries Viverette’s journey to the Sarthe region came to a close just outside the Top 34 after the heats.

Marcus Amand made the headlines again in the OK-Junior category. Tenth against the clock, the young French-Finnish won two of his three heats and claimed the Prefinal. Despite starting from Pole position, the final showdown of the category turned out to be more complicated for Marcus who nevertheless reached the third position chasing his nearest rival until the finish line. An overall-satisfying result less than two weeks before the closing round of the European Championship where he currently leads the OK-Junior ranking. Newcomer to the team, the American Santiago Trisini showed his tenacity recovering from 21st to sixth while Loïs Delbart missed the final qualification for a few points following troublesome heats.

During this weekend of intense competition, the team tested the Kart Republic chassis in the OK category and following this successful outing, the majority of the OK drivers will be debuting it on the international scene at the European Championship while the OK-Junior drivers will keep racing with the OTK chassis.

The Closing Round of the FIA Karting European Championship, where VDK Racing will enter 12 drivers, will unfold at Le Mans from July 18th to 21st.