The weather improved greatly during the Prefinals of the Rotax MAX Challenge International Trophy in Portimão and the variations in grip seen since the Qualifying Heats resulted in races as exciting as they were selective in all categories. 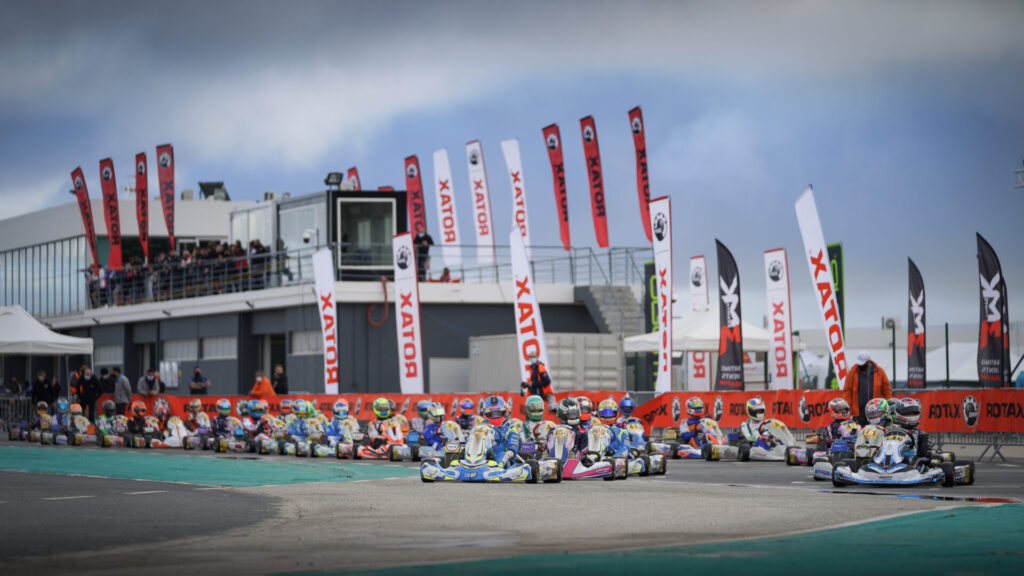 The two days of intense competition went perfectly at the Kartódromo Internacional do Algarve. After a rainy beginning to the week, the Mojo slick tyres gradually came onto the scene on Saturday afternoon during the Prefinals. This made the racing even more competitive, sometimes with some twists and turns, as the participants were preparing for the Finals on Sunday.

Henrijs Grube (LVA – Exprit – Team Victoria), who had already taken pole position, led the DD2 Masters Qualifying Heats with two victories. He confirmed his confidence by also winning the Prefinal. Rudy Champion (FRA – Sodi – PKS Compétition), who had until then remained in the leader’s wake, had to face a drop in performance in the Prefinal and it was Slawomir Muranski (POL – Tony Kart – 46 Team) who finished in 2nd position, followed by Romain Mangé (FRA – Tony Kart), who came back well.

DD2: Besancenez rewarded in the Prefinal

Xander Przybylak (BEL – Tony Kart – Bouvin Power) made perfect progress by winning the three DD2 Qualifying Heats, while Petr Bezel (CZE – Sodi – KSCA Sodi Europe) came back to 2nd position followed by Glenn van Parijs (BEL – Tony Kart – Bouvin Power). In the mixed conditions of the Prefinal, the situation developed well. Paolo Besancenez (FRA – Sodi), who clocked up the 17th fastest time and was 6th in the Qualifying Heats, proved to be irresistible. He won the race with more than three seconds advantage on Bezel, while Xen De Ruwe (SVN – Intrepid – SSC Sportstil) came back from 12th to 3rd position.

Poleman after Qualifying Practice, William Macintyre (GBR – Kosmic – KR Sport) showed a strong domination during the heats, where he kept the lead thanks to his perfect score of three victories. Aaron Walker (GBR – Tony Kart – Strawberry Racing) made a spectacular comeback from 19th to 2nd position. The consistency of Freddie Spindlow (GBR – Kosmic – KR Sport) earned him 3rd place.

In the Prefinal, on a partially dry track, the scenario was quite different and the tyre strategy was to be important. Walker managed to keep the lead for five laps before crashing. Tim Gerhards (NLD – KR – SP Motorsport) couldn’t resist the return of Patriks Locmelis (LVA – Kosmic – KSB Racing Team) for long before the pace started to change at the end of the race. Tom Braeken (BEL – KR – SP Motorsport) came into the last corner and crossed the finish line 1st. A dropped spoiler sent him back to 6th position and it was Locmelis who was declared the winner. Starting 29th, Daniel Guinchard (GBR – KR – Argenti Motorsport) wasn’t able to take 3rd place because of his spoiler and was 7th. Evan Giltaire (FRA – Sodi – Sodi Vitesse) was therefore 2nd in front of Freddie Spindlow (GBR – Kosmic – KR Sport).

Mini: Hannam in the heats and Jeff-Hall in the Prefinal

The battle was tough during the Mini Qualifying Heats as three different drivers won. Harry Hannam (ARE – MS Kart – DHR) finally overtook Thomas Strauven (BEL – Tony Kart – Strawberry Racing) and Ethan Jeff-Hall (GBR – Tony Kart – Strawberry Racing). Strauven and Jeff-Hall engaged in a long duel during the Prefinal, while Alexander Skjelten (LVA – Birel ART – National) took the opportunity to come back to the front of the race. Jeff-Hall had the last word against his team-mate Strauven and Skjelten finished 3rd, less than three tenths behind.

Poleman after Qualifying, Christopher Feghali (LBN – KR – DHR) won the three Qualifying Heats and the Micro Prefinal decisively with a comfortable lead. The battle raged behind him, but Max Sadurski (NLD – Energy) didn’t give up the 2nd position to Juliusz Ociepa (POL – Energy – KRK Racing) during the heats or to Jacob Ashcroft (GBR – KR – Dan Holland Racing) in the Prefinal.

Senior: Duel at the front between Westover and Porter

On a nearly dry track, the Prefinal was very tough and there were some exciting battles. The duel continued between Porter and Westover who were fighting for the lead. Porter took the advantage at the end of the race, but Ravenscroft took 2nd place in a rather lively last lap. Mark Kimber (GBR – Tony Kart – Strawberry Racing) managed to finish 3rd, while Westover was in 6th position.