Originally scheduled at the height of summer in Le Mans, the 2nd edition of the Rotax MAX Challenge International Trophy had to adapt to the Covid-19 pandemic like everyone else. Thanks to the important preparation work carried out by the 3MK Events team, the event could be rescheduled in Portugal from 8th to 13th December, 2020. With nearly 230 participants and a rigorous health protocol, the competition is already shaping up to be a success as the Qualifying Practices have just been completed. 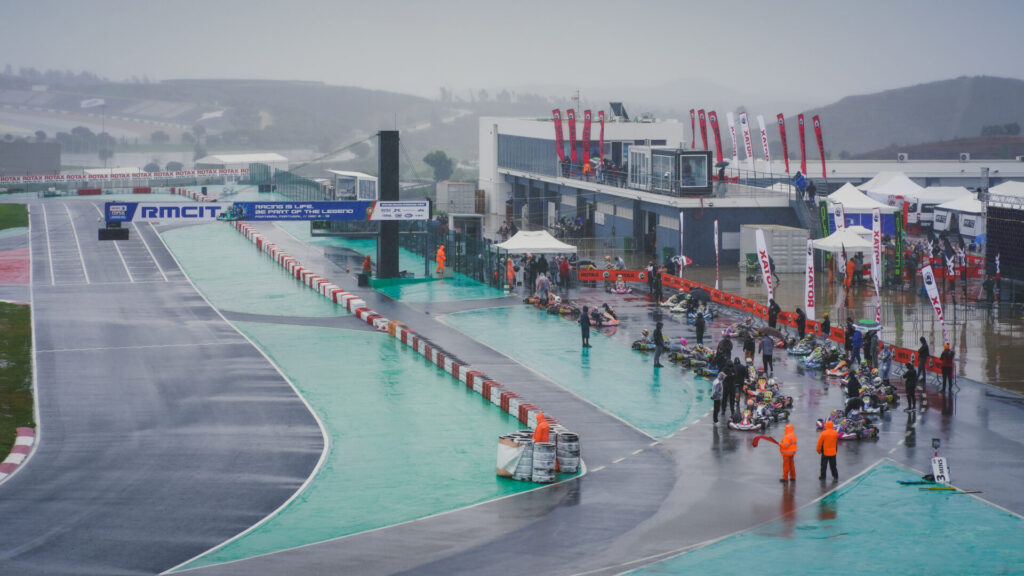 Bringing together 229 drivers of 36 nationalities at the end of the season on a kart circuit is a great achievement that testifies to the efforts of the organisers and the interest of the competitors in the Rotax MAX Challenge International Trophy. Although the sun is barely present for the moment above the Kartódromo Internacional do Algarve, the pleasure of lining up at the start of a great event from Rotax and Mojo with their own equipment has motivated all the participants.

The infection control protocol put in place reassures the karting community and limits the risks for everyone. Access to the track is controlled by a facial recognition system checking the wearing of masks which is very much appreciated. The requirement of a negative PCR test to enter the circuit enclosure and an automatic check of body temperature at each entrance are some of the basic measures, and the protective measures are well-respected.

Qualifying in the rain

Situated on the edge of the ocean, the Algarve is under the influence of the autumn depressions in the North Atlantic. This explains the rainy weather of the last few days and the fairly strong winds. Although constant, the rainfall is not heavy enough to disrupt the running of the competition. During the Timed Practice in the afternoon of this Thursday, 10th December, the battles were tough in all categories with very close gaps for such conditions.

Louie Westover (ESP – Tony Kart – DHR) took the measure of his 66 opponents when taking pole position in 1’14”518 in the second Senior group. He made a remarkable debut in the world of Rotax competition by relegating the fastest driver in the first group Linus Hensen (DEU – Mach 1- Kartschmie.de) by more than three tenths, as well as his direct follower in the second group Morgan Porter (GBR – KR – Argenti Motorsport). Nicolas Picot (FRA – Tony Kart – NPS) and Bradley Barrett (GBR – Sodi – Sodi Vitesse) completed the top five in front of several specialists while the top 12 drivers were grouped in less than a second despite the rain.