On the last weekend of October, the international karting community will shift its focus towards one much awaited event: the final round of Champions of the Future at the Kartódromo Internacional do Algarve in Portimao! The best teams and drivers competing in OK and Junior classes are expected in Portugal to give the new series by RGMMC the epic Final it deserves! Entries are still open but there won’t be room for all! 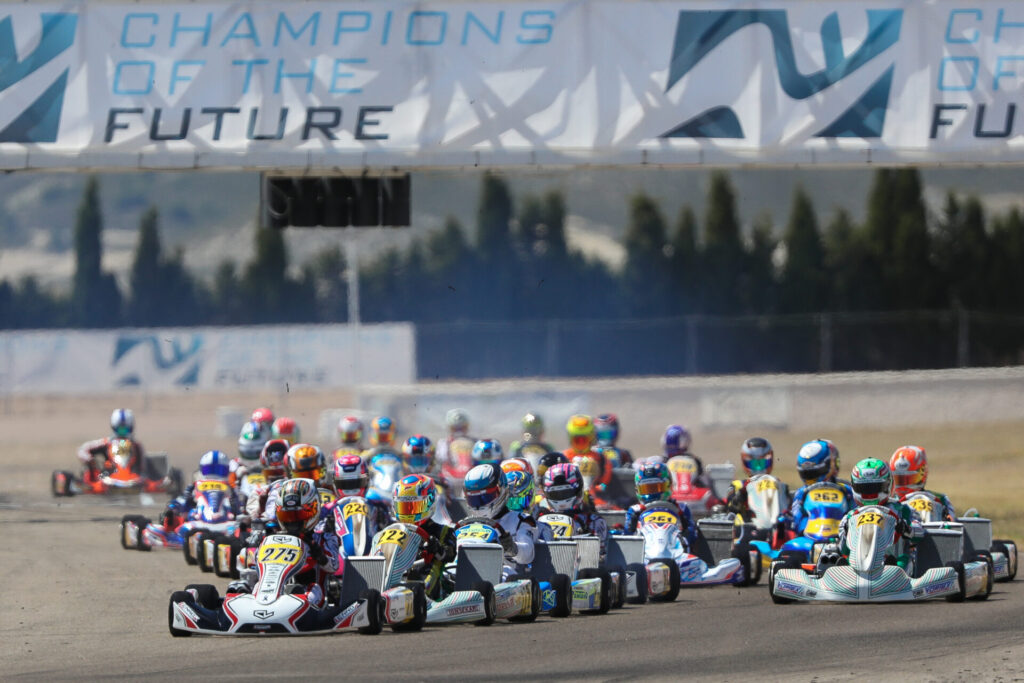 Champions of the Future, © 2020, Alexandros Vernardis / The RaceBox.

The cream of international drivers

The field will be made of two FIA Karting categories. OK once again confirms its status as one of the prime classes in international single-gear karting with the presence of most of FIA Karting Championships’ protagonists. The two-time reigning World Champion Lorenzo Travisanutto will be there to prepare for his title defense, opposed to the new European champion Andrea Kimi Antonelli but also the likes of Jamie Day, winner of Round 1, Taylor Barnard, Joe Turney, Nikita Bedrin, as well as former OK World champions Pedro Hiltbrand and Danny Keirle.

Since global interest around the class has been rising amongst those willing to learn the requirements of competitive racing, Junior will also see its fair amount of drivers aged between 12 and 14 years old. The newly-crowed European Champion Ugo Ugochukwu will lead a strong field at Portimao, including some of the season’s fastest hopefuls in Arvid Lindblad, Brando Badoer and Tuukka Taponen.

Ideal preparation for the World Championship

“The level of the competition is one of the best in the karting world,” according to Ricky Flynn, founder and Team Manager Ricky Flynn Motorsport. “James Geidel and RGMMC have been doing a great job at putting a strong championship together. The good thing is that they always try to improve it, not only from an organization’s point of view but also for the drivers and teams. This makes for better competition for everybody.”

Already a high-level stand-alone event in itself, the final round of Champions of the Future will also be of great importance to OK and Junior competitors in their preparation for the FIA Karting World Championship.

“Having a professional event like that one week before a World Championship, it has never been done before,” Ricky Flynn stresses.”Because of the F1 Grand Prix, an arrangement had to be made with the track, because it would have made no sense to go to the Champions race, leave the material there and come back two weeks later. Again, that’s something that RGMMC understood well, especially in this particular season where teams need to keep logistic concerns to the minimum. This way, it works better for all.”

“Since the race is a week before the CIK event, we are likely to have similar weather and track conditions, Mr. Flynn adds. Also, our drivers will use the same tyres, which is another good reason for teams to go. All in all, I hope they continue to organize the series in 2021 and keep getting the support from private teams and manufacturers.”

Worldwide visibility for all

The entire event will be broadcasted through a high-quality live video stream with commentary coverage. Qualifying, through a new concept called the “Qualifying Show”, Heats, as well as the Second Chance Heats, Prefinals and Finals will be streamed on RGMMC Productions’ Youtube channel and made available on the Champions of the Future official website and social media. Thanks to the work produced by RGMMC’s crew, all the competitors will be provided with a great opportunity to show their talents to larger audiences, gaining maximum support from their loved ones at home!

Top-level racing on the menu

One can expect a highly-disputed competition in all four classes on the 1531-meter long Algarve circuit. In OK, the Emirati driver Jamie Day (Leclerc by Lennox Racing) won the opening round in Spain but only has a seven point-lead over Nikita Bedrin (Ward Racing) and Joe Turney (Tony Kart Racing Team) while Taylor Barnard (Rosberg Racing Academy) and Juho Valtanen (Pantano Team) still have their say in the title chase.

Are you interested in competing in the final round of Champions of the Future at Portimao? Click on the banner below to register!