A week after the WSK Champions Cup, the Parolin Motorsport team completed an even more satisfactory event during the opening round of the WSK Super Master Series on the circuit of Adria. With an even larger, and even tougher field, the official Parolin drivers scored very consistent results. Al Dhaheri took a second victory in OK-Junior, Celenta mounted the KZ2 podium, and several Mini drivers had the opportunity to shine. 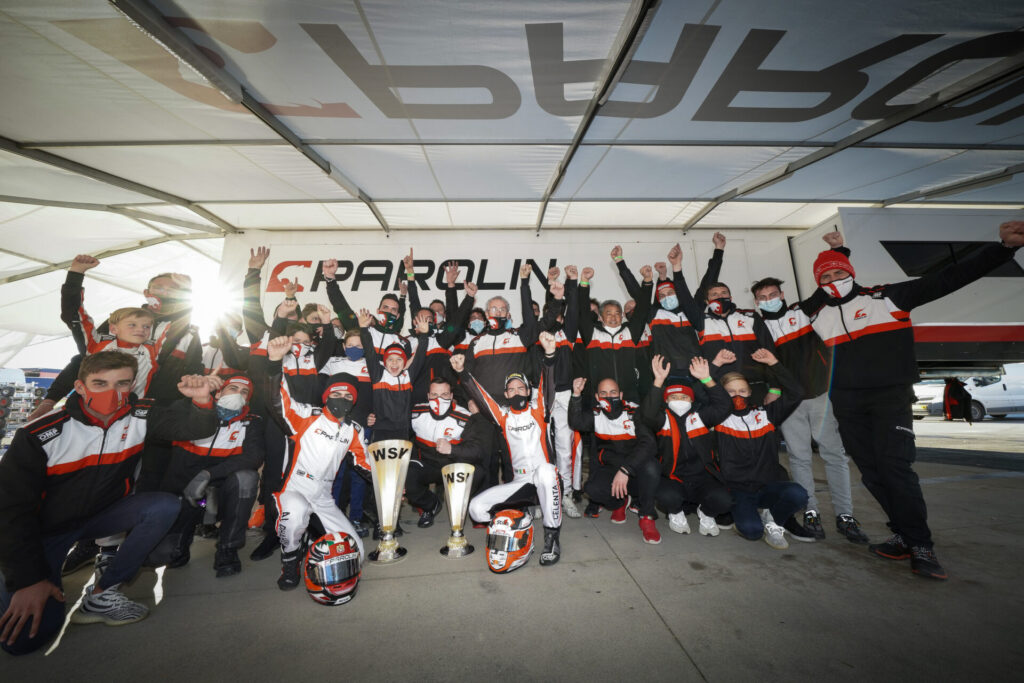 “There are many reasons to be satisfied at the end of this second weekend of competition in Adria,” declared Marco Parolin. “We have increased the general standard of our performances in every category, even though some of our drivers started their season this weekend. The technical potential is there and our work between the two meetings has already allowed us to take better results. Rashid Al Dhaheri put in a superb winning performance in the Junior class and Francesco Celenta was very consistent at the front of the KZ2 class against the top specialists.”

“In the Mini, five Parolin chassis were in the Final top 10, with 1st and 2nd places. Christian Costoya showed excellent competitiveness that would have deserved to be rewarded with an even better result in the Final. We are determined to continue in this positive way in a fortnight’s time at the next WSK Super Master meeting in La Conca.”

The performances of the Parolin / TM Racing karts were very convincing in view of the European KZ Championship that will start in Adria in May. Francesco Celenta took a victory in a heat and set two fastest lap times, and he was again the fastest in the Prefinal before moving up to 3rd place in a very competitive Final. The youngster Slavik Putiatin confirmed the speed of the drivers by maintaining a good rhythm and regaining 15 places in the Final.

The results showed a progression with a very positive comeback for Valerio Rinicella up to 13th position in the Final, whereas Danny Carenini took 24th place and Jesse Alejandro Carrasquedo qualified in 26th position. James Wharton wasn’t spared from issues and was forced to retire in the Prefinal. For his first race in OK Arnur Shabdar was not far from qualification.

Already a winner the week before, Rashid Al Dhaheri was even more dominant this weekend. Victorious four times in the heats, he won his Prefinal and the Final by a large margin, being each time the fastest on the track. The 32nd Qualifying time for Enzo Deligny didn’t prevent him from finishing very close to the top 10 in the Final, with a progression of nearly 20 places during the meeting. After some difficult heats, Kai Sorensen was able to raise the bar up to 25th position in the Final with a gain of 15 places.

Maksim Orlov, who made a strong comeback of 22 places in the heats, didn’t have the opportunity to make any progress in the Final stages, nor did Guillaume Bouzar who had nevertheless regained 21 positions. A driver moving up from 60 Mini, Nando Weixelbaumer was discovering the high level in the Junior category this weekend.

Performances at all levels in the Mini

Christian Costoya once again made his mark with four victories and two fastest laps in the heats. A complicated Final didn’t allow him to do any better than 8th among the 116 participants. Matias Orjuela was also twice the fastest in the heats with a fine consistency in the top four. It was a pity that he wasn’t able to take advantage of his 8th place in the Final until the end of the race. Oliver Kinnmark wasn’t rewarded for his efforts from 18th position on the starting grid of the Final. Simas Bacisuka fought with energy in the Prefinal for the pleasure of competing in the Final.