With the outstanding success of Oliver Gray, the Leclerc By Lennox Racing Team finally achieved the result for which it has worked extremely hard for all of this first part of the season, including the lockdown months. The first round of the WSK Euro Series brought a lot of satisfaction for the structure using the Charles Leclerc chassis made by Birel ART, thanks to the partnership with TM Racing, and is now a constant presence in the first positions of the grid. 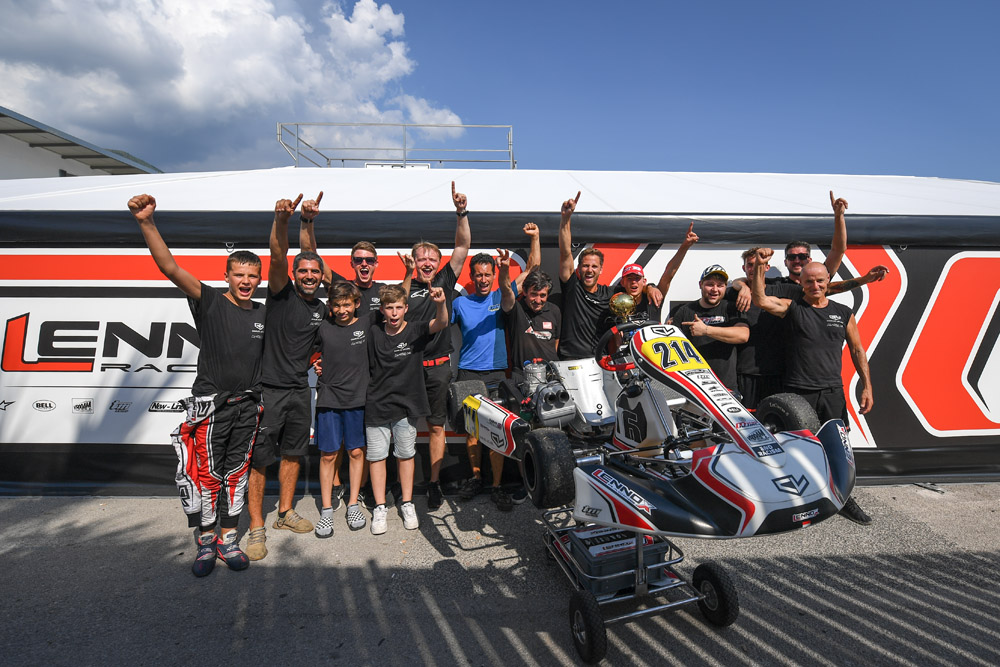 “It has really been a weekend full of emotions, both on the track and at home, since my daughter Nina Grace was born”, says Team manager Jordon Lennox-Lamb. “There are no words. I just want to thank all the members of the team and the drivers for this great success that I did not expect could come so soon and which is the result of their determination. A big thanks also goes to TM Racing and the Madchec tuners who, once again, offered a truly exceptional service.”

Oliver Gray’s victory in the OK class came at the end of a weekend where the British driver dominated from the very beginning. The pole position on Friday, in fact, preceded an amazing achievement of three victories and a second spot in the Qualifying Heats. Another victory was achieved in the Prefinals. In the decisive race, Gray, despite debuting in the category, showed great determination and maintained a cool head in regaining the lead of the field all the way to the flag.

Quite impressive was the ability of Oliver Gray to set the fastest lap each time he got to the track, for a total of six. The Final also saw Jamie Day in great shape, setting things back on track on a weekend marked by bad luck, with an awesome comeback of 10 positions which followed the nine recovered in the Prefinals.

Leclerc By Lennox Racing team was equally in the spotlight in the KZ2 category, despite the fact that the final result was affected by the events. After the excellent second best lap time obtained in qualifying, Matteo Viganò dominated the heats with two clear wins and a fast lap, until an unfortunate withdrawal in the third heat compromised the two decisive results. In the same race, Viktor Gustavsson, unfortunately, did not manage to cross the finish line, yet he redeemed himself in the Prefinal by recovering six positions, reaching the seventh spot, then closing the Final in eight position.

Finally, the great progress made by the OK-Junior drivers must also be highlighted. Both Rafael Modonese and Ivan Domingues managed to finish in the Top Ten of their Prefinals after a good performance in the Qualifying Heats. Here, in particular, Modonese could have scored four results in the Top Ten spots, if not for withdrawal. In the Final, where Domingues still managed to improve his starting position, the drivers collected less than they had hoped for, yet the path taken by both racers was undoubtedly beginning to bring their first excellent results.

After these first two races in Italy, the Leclerc By Lennox Racing Team is now getting ready for the opening meeting of Champions of the Future at the Circuito Internacional de Zuera, in Spain, once again competing in OK and OK-Junior classes.