After its success in last week’s WSK Champions Cup, the team led by Jordon Lennox-Lamb also won the first round of the WSK Super Master Series, once again with Viktor Gustavsson who took the KZ2 Final by storm. 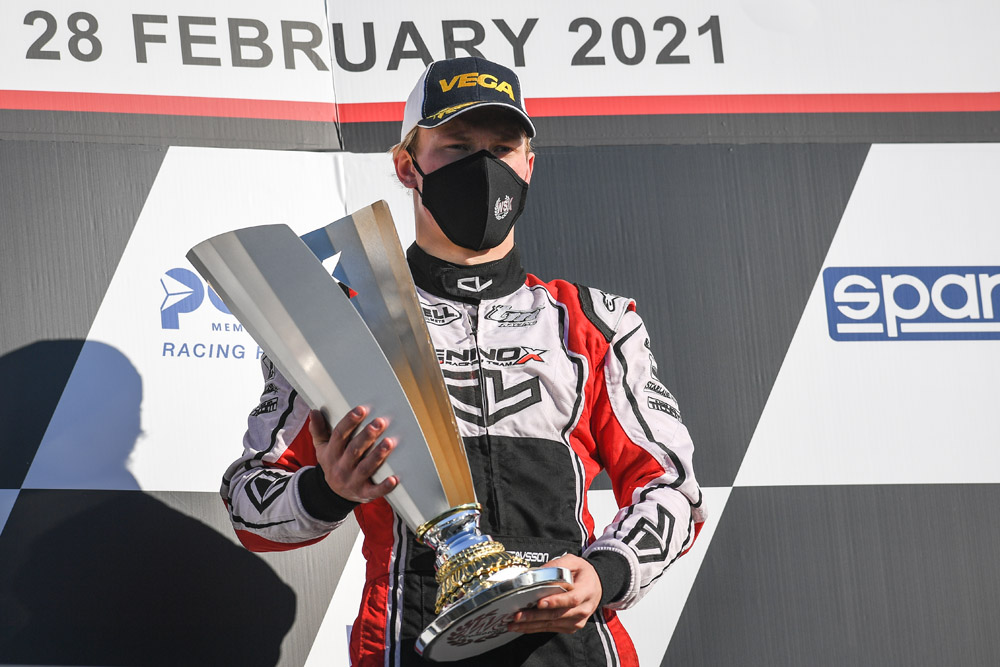 2021 continued on a positive note for the Leclerc by Lennox Racing Team. The CL chassis produced by Birel ART and powered by TM Racing once again proved extremely competitive in all classes, from Mini to KZ2.

In the shifter class, Viktor Gustavsson recorded his second consecutive win. Starting in second place on the grid and then dropping to third, the Swede managed to take the lead on the fourth lap and flew unchallenged towards victory. He thereby concluded a weekend that began with pole position on Friday and continued with wins in two heats and the Prefinal.

Matteo Viganò and Laurens Van Hoepen also recorded good performances in KZ2. After the ninth time in the group in Qualifying, the Italian climbed the standings in each heat and finished the Pre-final in the top six. The Final also saw him stage a comeback: he started in 12th and finished seventh, but was subsequently awarded a five-second penalty. The same fate awaited Van Hoepen, who was awarded the same penalty in the Final. However, overall the Dutchman proved even faster than the previous weekend, recording the fourth fastest time in the group, the seventh overall in qualifying, and confirmed his competitiveness in the heats.

Moritz Ebner managed another positive weekend. In the top 15 in both his group in qualifying and in the heats, the driver of the Leclerc by Lennox Racing team finished the Prefinal in the top ten and the Final close to the top 20, demonstrating considerable potential. Axel Bengtsson, on the other hand, was rather unfortunate and, following excellent comebacks in the heats, was forced to retire on the first lap of the Prefinal.

Martinius Stenshorne recorded an excellent performance and an improvement compared to the previous week, finishing in the top ten in his second race in the OK class and managing to be very fast throughout the weekend. The results of Ivan Domingues and Oscar Aponte also improved, as they continued to familiarise with their CL material.

Encouraging signs from Marcus Saeter and Caleb Gafrarar in the OK-Junior class. Saeter showcased his progress compared to the previous week, while Gafrarar used his first international race of the season to learn as much as possible and be better prepared for the next event.

Matic Presa was once again the protagonist in the Mini class, starting the weekend with the third time in the group in a class that numbers 115 drivers. Continuously in the top ten both in the Heats and the Prefinal, he was hampered by a difficult start in the final, but proved to be extremely fast and gained more important experience for his development. Zdenek Babicek completed a weekend of apprenticeship in his first appearance of the season in CL’s colors.

The Leclerc by Lennox Racing Team is looking forward to the next race, Round 2 of the WSK Super Master Series, which will be held on the La Conca circuit on the weekend of 12-14 March.