Taylor Barnard won the second round of the FIA Karting European championship – OK after a faultless Final from start to finish! The British driver, who now leads the provisional standings, took the win ahead of Andrea Kimi Antonelli and Joe Turney, this Sunday under the heat of Sarno! 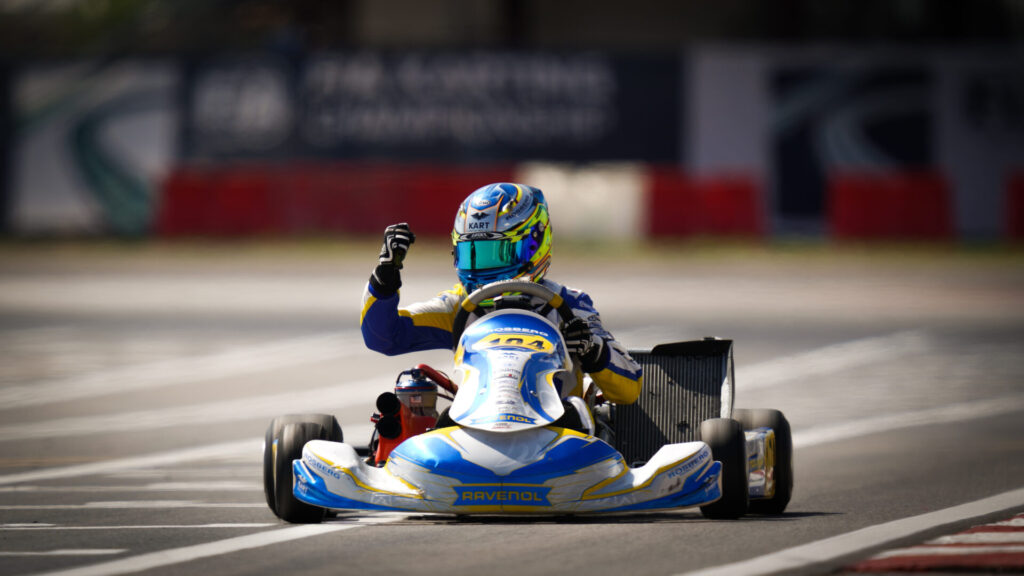 The weather remained beautiful and very hot throughout the Neapolitan weekend, putting drivers and equipment to the test. The last Qualifying Heats on Sunday morning were as competitive as the day before, and some of the drivers still had some hopes. The two Finals were not to be outdone either with several significant incidents.

From the beginning of the Final, Weug, Janker and Harry Thompson (Exprit/TM) retired on the first lap. Barnard was ahead of Joe Turney (Tony Kart/Vortex) and Juho Valtanen (KR/IAME) but Andrea Kimi Antonelli (KR/IAME) came back very strongly.

Barnard had had time to build up a lead of almost two seconds by the time Antonelli took second on lap 7: the chase was on. Barnard maintained a very fast pace and Antonelli had to face the fact that victory was going to be very difficult to achieve.

Even though Barnard slowed down slightly at the end of the race, it did not prevent him from winning the feature with a nine-tenths lead over his rival. Turney finished third, Nikita Bedrin (Tony Kart/Vortex) was fourth, while Camara managed to regain ten places in fifth.

“I’m very satisfied with my performance in Sarno,” said the Rosberg Racing Academy driver. “The equipment was excellent, the team was perfect. I have to admit that my engine showed some signs of wear in the final laps of the Final. I had to relax a little bit until I crossed the finish line with relief.”

Click here for the complete results of the Junior Final at Sarno.

The third and final round of the FIA Karting European Championship – OK will take place at the Pro Kart Raceland of Wackersdorf, in Germany, from September 11th to 13th, 2020.