From the World Championships conquered one year after its début to the Rok Cup universe: the OTK Group engines division left an indelible mark in karting during its first 25 years of existence, conquering over 100 international titles and the satisfaction of thousands of karting fans. 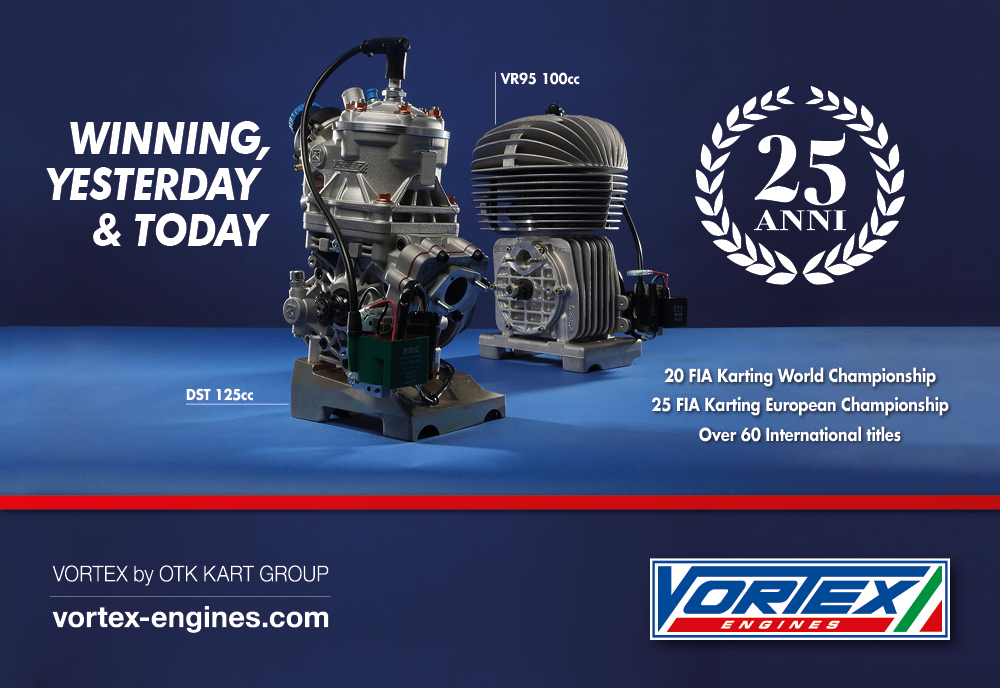 A quarter-century of great karting and lots of engines: with this big satisfaction in mind, Vortex celebrates its 25th anniversary as engine manufacturers for racing karts.

It is the year 1995 when a well-known reality as tuners within the karting scene decides to challenge the “giants” of international karting at the time and go beyond the simple tuning, becoming in all respects a company able to create top racing engines internally.

The first Vortex engines making their debut on track are the VA95 models dedicated to the ICA-J and Formula A categories, and VR95 dedicated to the Formula Super A and whose letter R indicates the rotary valve mechanism.

In 1996, the company gained its first world titles conquered by Johnny Mislijevic in FSA and by Jean Christophe Ravier in Formula A, followed by another victory thanks to James Courtney.

Over 25 years, the number of international titles reaches beyond the 100th mark, including 20 world championships, the last one dating back to 2019 with the DJT engine in the OK-Junior category, and 25 European championships.

Vortex engines won throughout the era of 100cc. air-cooled and then water-cooled engines, the increase in engine capacity to 125 cc., the abolition (and the return in 2016) of direct drive.

With the Italien engines, many great drivers who wrote the history of karting, such as Marco Ardigò and Davide Forè who conquered lots of victories over the years, as well as rising stars such as McLaren F1 driver Lando Norris, Logan Sargeant, and Enaam Ahmed.

The ROK Cup project also came to life in 2003 with a universe including a whole range of reliable and performant engines from the Mini to the Shifter and whose single-brand ROK Cup championship, organized by Vortex, is now well-established all over the world.