VDK Racing concluded its 2020 season with the FIA Karting World Championship for the OK and Junior classes, last weekend at Portimao. Mixed weather conditions made it more difficult for the eight drivers of the Belgian team to achieve the results they had targeted. The pace and progress they all showed on the Kartodromo Internacional do Algarve still gave the Belgian team plenty of satisfaction, highlighted by the top ten-result of Ariel Elkin in the Junior final. 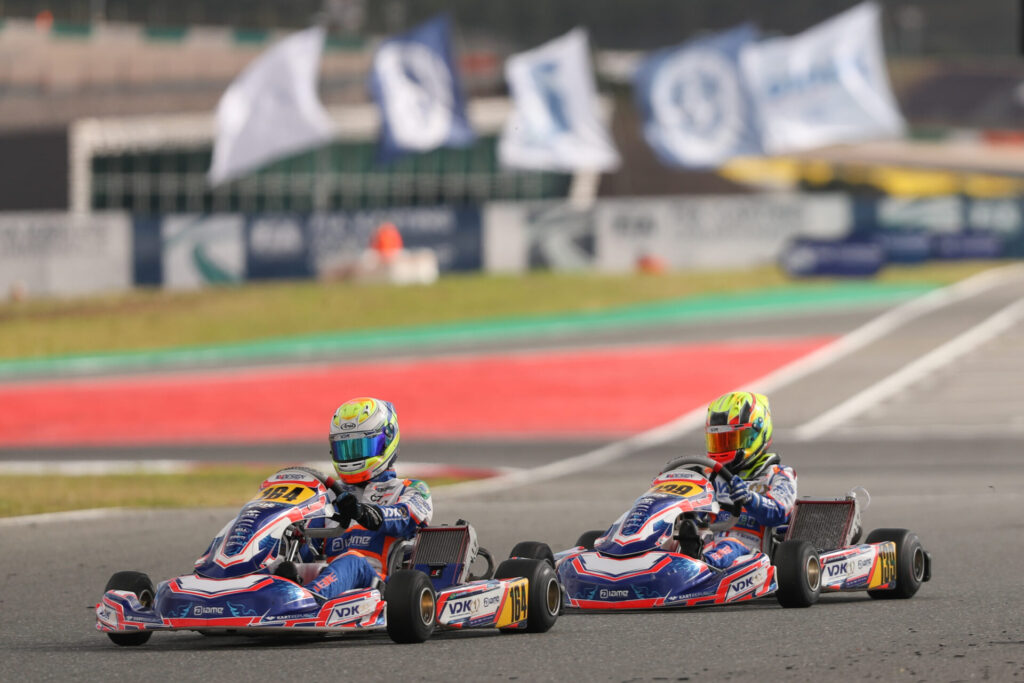 One week after the stellar win of Marcus Amand in the Champions of the Future closing round, VDK Racing had built legitimate hopes for strong results coming to the FIA Karting World Championship for the OK and Junior classes. Unlike the previous weekend, though, the Portuguese weather made the task of the young drivers more difficult than expected.

Maxens Verbrugge and Ariel Elkin showed great speed in qualifying and both reached the Junior final for their first participation in a world-class competition. Augustin Bernier, Alessandro Giusti, and Antonio Leite achieved encouraging performances but were not always rewarded as they would deserve. Florian Rousseau-Ricci, for his maiden appearance at this level in OK, concluded the weekend within the 36 finalists. Hugo Besson, despite a strong qualifying, could not confirm in his heats while Marcus Amand had a troublesome second race in Portimao.

Junior: Elkin concludes on a high

Maxens Verbrugge started the event on the right foot with the third-best time of his qualifying series. By the time he found his pace in the heats, he came very close to claim his maiden win on Saturday afternoon, which was enough to earn him a place within the Top 36! Less happy in the final, Maxens nevertheless confirmed his rising potential in Portugal. Eighth-fastest in his qualifying group, Ariel Elkin made several strong comebacks in the heats that he concluded in 17th position overall. He showed again his ease on slippery conditions in the final by overtaking eight drivers up to an impeccable ninth-place finish! Augustin Bernier, Alessandro Giusti and Antonio Leite did not disappoint with several Top 10-finishes in their qualifying races. Sixth-fastest of his group on Friday, Augustin missed the final for a handful of points, while Alessandro and Antonio showed strength and motivation during the competition.

Eric Verdaasdonk (Team Manager of VDK Racing): “On the dry or in the rain, not his favorite conditions, Ariel was very fast. His weekend didn’t start well in qualifying but he managed to recover from far in his heats. In the final, his speed was excellent and finishing ninth in his first world race is a great achievement! Maxens almost won a heat, congratulations to him especially at this level and with his still young experience of the category. Augustin, Alessandro and Antonio also fought well on track despite some race-related issues that sometimes prevented them from aiming higher.”

Florian Rousseau-Ricci put his driving skills to good use by recovering 16 places in his heats. Qualified for his first world final, an issue in the opening laps prevented him from finishing on another high. Hugo Besson started well with the eighth-fastest time of his group on Friday, but an incident in one of his heats locked him the doors to the final despite an overall positive competition. Despite his perfect performance in the Champions of the Future final, Marcus Amand’s World Championship hopes fell short of his expectations. A disrupted qualifying, where he could not set a lap time due to a contact with another driver, meant he had to start his heats from the back of the grid. Fast in all circumstances, he still stumbled upon several obstacles and had to give up his final ambitions.

Eric Verdaasdonk: “It’s a bit of a shame what happened to Marcus. From where he started in his heats, his situation quickly became very complicated but he never gave up. His pace, especially in the dry, proves that we were on top form on this circuit. The team had found the right set-up since the previous weekend and with a little bit more luck, we could have fought for the podium or even the title. Florian reached the final and Hugo could have done the same without a problem in one of his heats. They are still in a learning phase but they fought well. We are very happy with our drivers’ performances, the whole team has worked well and the lessons learned are positive.”

VDK Racing will now take a well-deserved winter break while preparing for a busy 2021 season competing on multiple fronts in OK, Junior, and X30.