At the beginning of November, the FIA Karting OK and Junior World Championship concluded a 2020 season disrupted by serious health problems on a global scale. Everyone worked hard to try to make up for the time lost away from the circuits. Well prepared, the Parolin Racing Team approached the major world meeting with serenity, but the Portuguese weather conditions upset its plans. Travisanutto held his place among the best in OK, whereas Wharton ensured a nice comeback in the Final. Al Dhaheri made magnificent progress by finishing on the track in eighth position in the OK-Junior category. 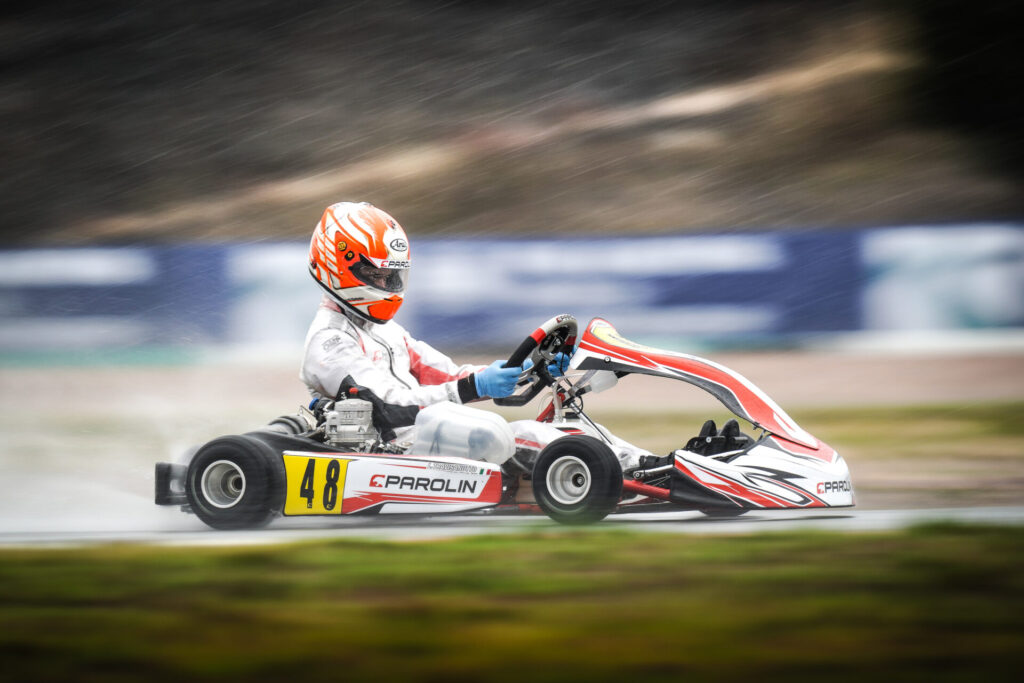 “We are not fully satisfied with the outcome of this World Championship,” said Marco Parolin. “After the great performances of the previous weekend in the Champions of the Future series, we were ready to confirm our strong potential in both categories, but we had to face totally different weather conditions that forced us to fight harder than expected. In the end, we managed to place two drivers in the top 10 after the chequered flag in OKJ and OK, but I can’t deny that we were hoping for a better result in this competition. After bittersweet races like this one, the only thing we want is to get back on the track as soon as possible to work on the next event.”

OK: Travisanutto at the forefront

Ranked seventh in Qualifying, Lorenzo Travisanutto completed three good races on Saturday, including one victory, and he was able to secure third place at the start of the Final. The wet track wasn’t really favourable for him, but he nevertheless ensured a solid performance in the leading group by finishing in sixth position. James Wharton wasn’t able to defend his chances as he would have liked during the Qualifying Practice and he had to settle down afterwards with a place in the middle of the pack.

He didn’t have many chances in the heats, but he managed two good races, including a convincing 6th place in the last one, in the rain. He was in last place on the second lap of the Final and he started a superb comeback on slippery ground and regained 16 places in 15 laps to finish 17th. Portuguese driver Miguel Silva didn’t have an easy task after his 53rd Qualifying time and he couldn’t join the 36 finalists at the end of the heats.

In continuity with the previous weekend, Rashid Al Dhaheri has achieved good results during this World Championship. Only 44th in the Timed Practice sessions, the Emirati driver completed five-strong Qualifying Heats, even setting a fastest lap, and he made a spectacular gain of 26 places to qualify 18th. He built his Final on the same pattern. He made a very good start in the rain and was in 10th position from the first lap. He attacked again as soon as the slow procedure was over and kept fighting for eighth position. Unfortunately, a mispositioned spoiler dropped him back to 13th after the finish.

Maxwell Dodds showed his usual determination to regain no less than 21 places during the heats and narrowly qualified in 33rd position. The British driver came back even stronger in the Final race, reaching 11th place with four laps to go, a gain of 22 places in 11 laps of the race. He then dropped back down before being heavily sanctioned. The other drivers of the team had different fortunes in the heats and didn’t manage to join the list of finalists. Valerio Rinicella had nevertheless set the second-fastest time in his third race, taking 11 places. Giovanni Trentin was consistent but was penalized in the rain. Guillaume Bouzar still regained 16 places, Maksim Orlov 15, and Jesse Carrasquedo 10.