Callum Bradshaw dominated the OK Final of the FIA Karting World Championship, this Sunday on the Kartodromo Internacional do Algarve. The Brit led an impressive triple for the Tony Kart Racing Team, completed by Joe Turney and Pedro Hiltbrand, under the rain of Portimao. 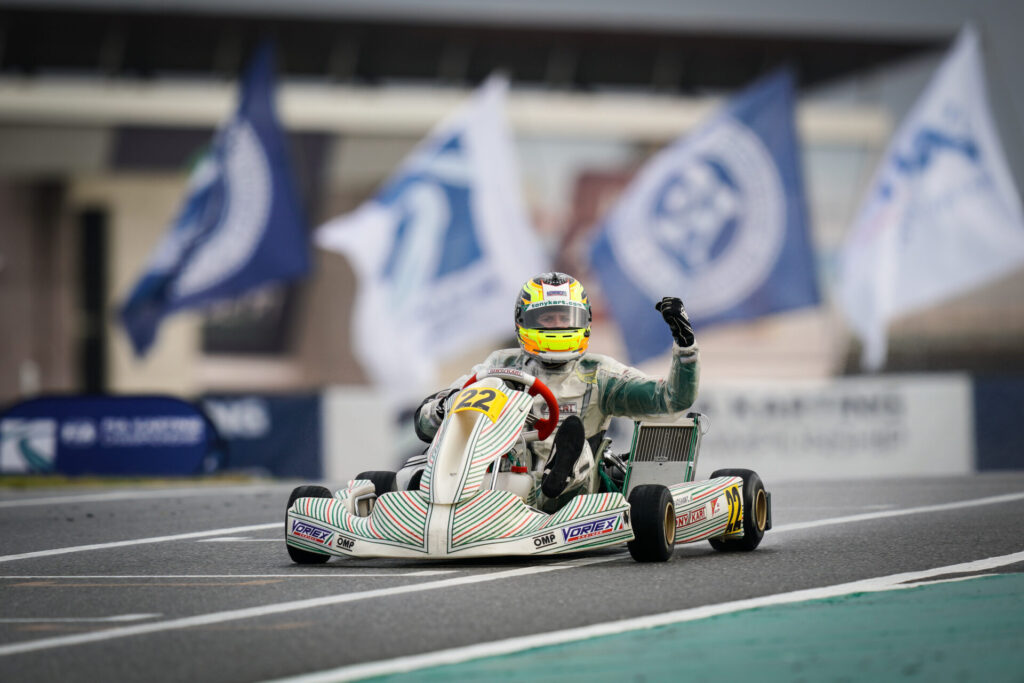 Leader of the Qualifying Heats with his three victories the day before, Taylor Barnard (KR/IAME) maintained his status on Sunday morning despite the already impressive comeback of Callum Bradshaw (Tony Kart/Vortex) in the rain. These two drivers shared the front row of the Final in front of two experienced opponents, Lorenzo Travisanutto (Parolin/TM) and Pedro Hiltbrand (Tony Kart/Vortex). The poleman Matheus Morgatto (Birel ART/TM) was one of the drivers that was delayed in the morning.

The rain had calmed down by the time of the start, but the track was still wet. A collision occurred shortly after the lights went out and the race was neutralized. A new start was given 25 minutes later, but neither Andrea Kimi Antonelli (KR/IAME) nor Maya Weug (Birel ART/TM) were able to get back on track.

Bradshaw was immediately very fast in these track conditions. Barnard couldn’t follow his rapid pace and was soon under threat from Hiltbrand and his teammate Joe Turney (Tony Kart/Vortex). Further back, some slippery figures continued to eliminate serious contenders. Without ever reducing his pace, Bradshaw let his joy explode by crossing the finish line more than six seconds ahead of Turney and Hiltbrand, a winning triple for the Tony Kart Racing Team.

Morgan Porter (KR/IAME) ensured a strong fourth place ahead of Barnard, whereas Travisanutto finished sixth. Two official CRG drivers made strong comebacks during the race: Rasmus Joutsimies (CRG/TM) to eighth with a gain of 19 places and Ruben Moya Lopez (CRG/TM) 10th with a gain of 22 places.

At the age of 19, British driver Callum Bradshaw was crowned FIA Karting World Champion – OK in the colors of the Tony Kart Racing Team, four years after winning the FIA Karting Academy Trophy.

Check out the full results of the OK Final.