The conclusion of the 2020 FIA Karting World Championship – Junior had no lack of turnarounds. The omnipresent rain on Sunday, 8th November, on the Kartódromo Internacional do Algarve played a major role in the final outcome. Freddie Slater, winner in the last meters of the 17-lap Final, claimed the 2020 title after a thrilling fight in difficult conditions! 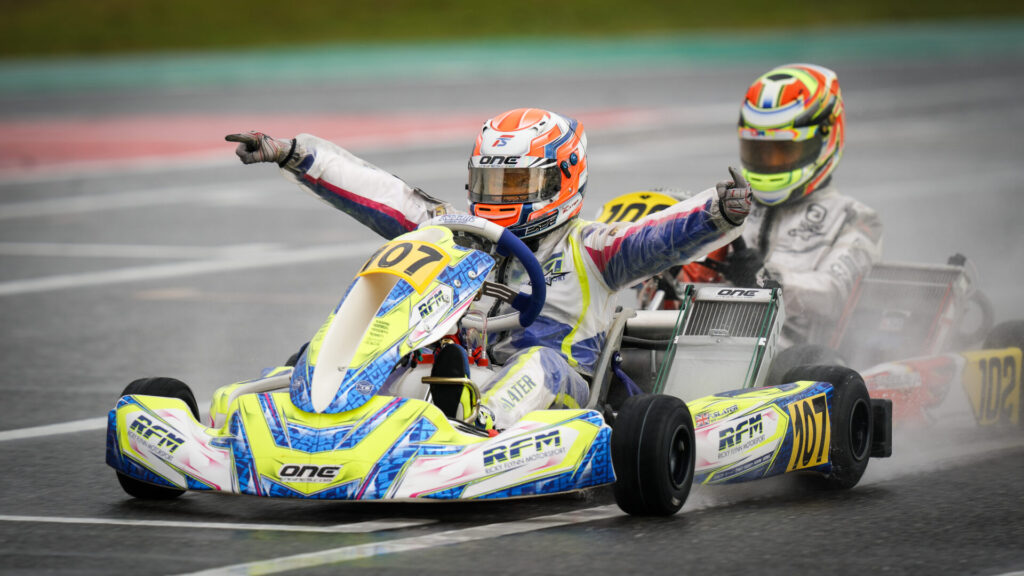 The rain didn’t fall during the entire day, but the circuit of Portimão remained constantly very wet during the whole competition. The contrast with the previous day set up a new balance of power in the last Qualifying Heats of the morning. As it was difficult to escape from all the traps set by the limited grip, there were many small race incidents. Several drivers left their illusions on the edge of the track during uncontrolled slides that could happen at the beginning of the race as well as in the lead up to the finish.

The last three Qualifying Heats on Sunday morning didn’t really upset the hierarchy of the FIA Karting World Championship – Junior, but they did deal some cards before the Final. Brando Badoer (KR/IAME), Tymoteusz Kucharczyk (RK/TM) and Evan Giltaire (Sodi/TM) for instance found themselves in much less favourable situations, as did Keanu Al Azhari (KR/IAME), Alex Powell (KR/IAME) and Connor Zilisch (Tony Kart/Vortex).

Christian Ho (KR/IAME) started from pole position for the Final alongside European Champion Ugo Ugochukwu (KR/IAME). A minor incident involving several karts took place shortly after the start and the “slow” procedure was initiated to clear the track and its surroundings. Freddie Slater (Kosmic/Vortex) had already taken the lead and Ho was chasing after him. Harry Burgoyne (KR/IAME) and Arvid Lindblad (KR/IAME) came to join the battle. After mid-race, Slater seemed to be on his way to an easy victory with his lead of more than 1,5 seconds but Lindblad mastered the wet track perfectly and came closer and closer in the last laps.

An intense battle between Lindblad and Slater took place watched by Ho who went slightly off the track and tried to take advantage of it. Lindblad seemed to be in a position to take the victory in the last corners but Slater didn’t give up and finally won by a few thousandths of a second. Lindblad was then penalized for an incorrectly positioned front fairing and it was Tuukka Taponen (Tony Kart/Vortex) who took second place with a gain of seven places. Still present in the leading group, Burgoyne finished third on the podium, ahead of Ho and Lindblad in fifth position.

Freddie Slater was crowned FIA Karting World Champion – Junior at the age of 12 in the colors of the Ricky Flynn Motorsport team.

Check out the full results of the Junior Final.