The Tony Kart Racing Team had a fruitful weekend at Lonato in the final double-header of the WSK Euro Series. Alfio Spina conquered Round 2’s Final and stepped on Round 3’s podium, while Joe Turney also took a win and a second place in the OK class. 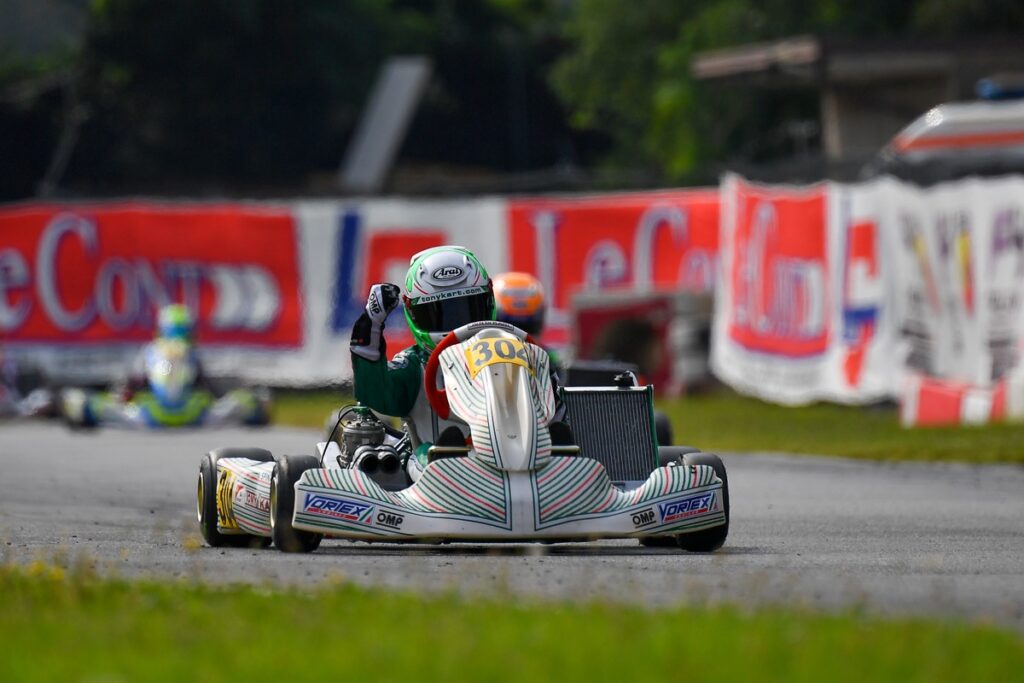 WSK Euro Series came to a spectacular end in its double round at South Garda Karting. The Tony Kart Racing Team made the most of it to conquer the Junior title with Alfio Spina. Apart from the Italian, coming second and third in the two Prefinals and author of three best laps, Harley Keeble also stood out in the Junior class. The Brit was always Tony Kart’s driver in the Heats’ ranking of both rounds.

In Finals, he was able to gain a top ten-result in Round 2 and carried out a 11-position recovery in Round 3. Maxim Rehm qualified for both Finals together with Tuukka Taponen and Karol Pasiewicz, both in the top ten of the second final after gaining positions, while Aiden Neate was unfortunately involved in a contact in the first Final and forced to withdraw in the second Prefinal.

The Tony Kart Racing Team also played a leading role in OK. Joseph Turney fought for the title to the end, conquering a first and second place in the Finals, centered another victory and a second position in Prefinals with a best lap. He achieved Round 2’s pole position and obtained two victories and three second places in the heats. Great performance also from Callum Bradshaw who recovered eight positions in the first Final before being forced to retire in the heats of the third round.

In KZ2, the Frenchman Emilien Denner closed his first race in the team within the top ten in both Finals. Good weekend also for the other two new entries, Jean and Sam Luyet who recover eight and 13 positions respectively in the Final 1 and 2, while Alessio Piccini overtook nine rivals in both decisive races. Noah Milell also qualified in both Finals while Gilles Stadsbader managed to improve his starting position in Round 2’s Final.

Great deal of progress, finally, for the Mini 60 drivers. James Egozi centred the top 10 in both finals after gaining a victory in the heat too. Jimmy Helias finished in the first ten in both Prefinals while Jules Caranta got a penalty in the last Final.

The Tony Kart Racing Team will be back to the South Garda Karting in two weeks for the much-awaited FIA Karting World Championship – KZ and International Super Cup – KZ2.