Superkarts! USA announced this week the expansion of their shifter kart classes by allowing from this year’s ProTour and ProKart Challenge the popular KZ engine format alongside the 175sse. The move comes after careful deliberation between both factions of IAME USA, and valuable input from teams throughout the SKUSA paddock. 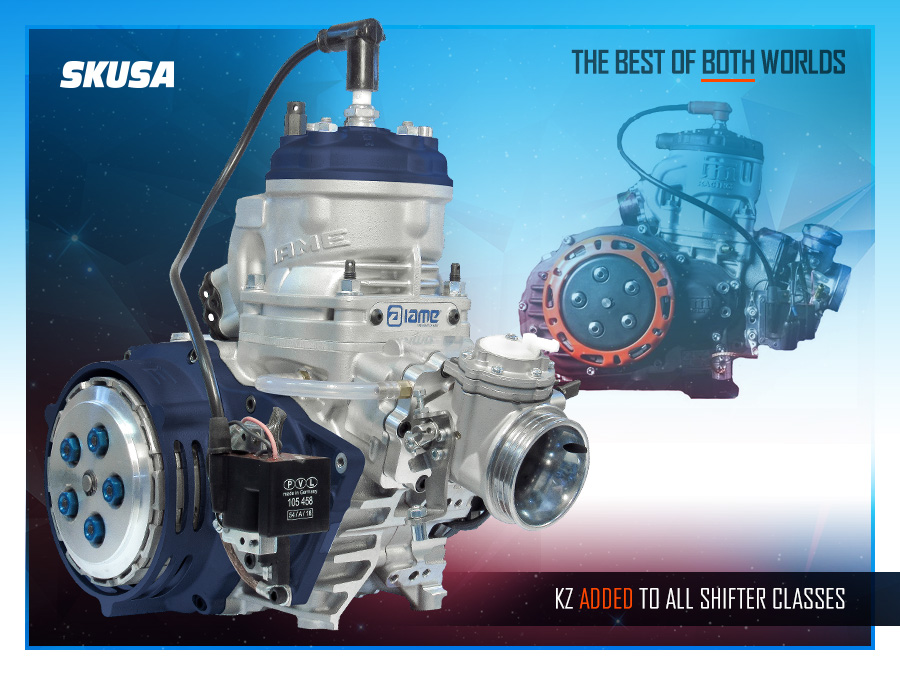 “We feel we have a shifter kart engine that’s second to none,” explained SKUSA’s principal Tom Kutscher in the official statement. “That said, we would be lying if we said it’s been a perfect rollout. Various issues hindered the format at the very beginning, including an unfortunate one with the Tillotson carburetor. To their credit, they have worked tremendously hard alongside us to rectify the issues and we still consider them a valuable partner in the program. In recent months, the 175SSE has been rock solid and drivers continue to praise its durability and longevity. On the event side, however, we are still a promotion company. Our customers’ input matters the most and we strive to be as inclusive as we can.”

Beginning with the first rounds of the ProKart Challenge and the SKUSA ProTour at NOLA Motorsports Park, all shifter classes will be expanded to include the KZ engine format. After extensive comparisons, the parity between the KZ and 175SSE engines on the stopwatch is undeniable. While the 175 is obviously a bigger engine, the detuned nature of its design is optimized for longevity versus performance. At the most recent SKUSA SuperNationals, both classes were within tenths, with each engine taking turns being faster than the other.

There is a general confusion in the paddock as to why the 175cc came to be, and IAME USA technical director Lynn Haddock was quick to clarify the rationale. “It’s no secret the CR-125 was going away and parts were becoming increasingly scarce. Rather than go with a conventional 125cc run on the ragged edge, we opted to go with a detuned 175cc specifically optimized for durability. By utilizing a larger displacement engine at only 65%-75% of its theoretical potential, it extends the time between service intervals to unprecedented levels. Many of our customers are going an entire season between rebuilds, with no loss in performance.”

IAME USA technical director Lynn Haddock was also very optimistic about the decision to include KZ. “Competition furthers innovation,” that is perhaps never truer than in motorsports. “Showcasing the 175SSE alongside other shifter kart engines gives us a valuable opportunity to highlight some of our advantages to customers.”

Innovations on the 175 SSE are anything but complete. Much of the feedback surrounding the platform has centered around the carburetor. In concert with IAME USA’s 175 SSE specialist George Tavares, the improvements will continue. “We are constantly improving the format,” said Tavares. “One of the more common concerns we hear about is the drivability. One of the free improvements we will roll out to customers is a new carburetor lever system to increase throttle modulation and control.”

To clarify the procedural items:

“There is a perception out there we wish to collectively improve,” added IAME USA East’s Eric Jones. “There is a belief we aren’t willing to listen to customers and that is untrue. Both factions of IAME USA are very focused on customer input and satisfaction. Giving drivers who may already have a KZ engine the opportunity to come race is a good thing, regardless if it’s an IAME or not. The backbone of SKUSA’s roots have always focused on shifter karts, harkening back to the days where different moto engines ran in mixed fields. We think this will be an exciting way to showcase the advantages of the IAME 175 SSE.”

In another affirmation of the product, IAME USA’s Eric Jones is also pleased to confirm the 175 SSE will be a featured class in the promotion’s IAME National Championship race later in the year.