The last round of the European Championship didn’t go very well for Parolin Racing Kart. Little known by the team, the circuit of Wackersdorf offered very different conditions than the two previous competitions and the circumstances weren’t often favorable for the Parolin drivers. Only Valerio Rinicella was able to maintain his position in the Junior class and to finish in fourth place of the Championship, an exceptional result for a rookie. However, the Racing Team took the opportunity to prepare for the World meeting at Portimao. 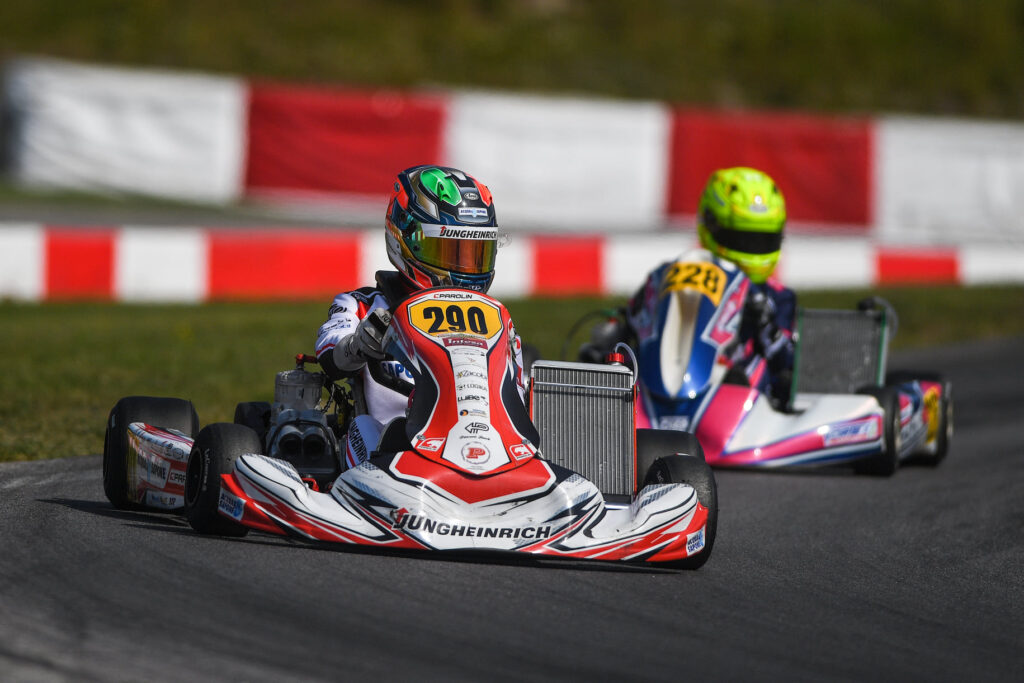 Shorter, more twisty and more demanding, the Wackersdorf circuit was the opposite of the first two European races, especially as the weather was much cooler than in Spain and Italy. The only constant in the 2020 European Championship was the impatience and excitement of part of the field, which resulted in many incidents on the track throughout the season.

“We were expecting a difficult competition”, explained Marco Parolin. “But the harshness of the races and frequent crashes didn’t make it any easier for us. James Wharton showed that we had very good performances in OK, as did Valerio Rinicella in OK-Junior. The Qualifying session didn’t turn out to our advantage and we had to regain ground in the heats, which is often a risky exercise. Rinicella was incredible in avoiding all the traps in his races. It’s very satisfying to see him finish fourth in the European Junior Championship in his first season against three much more experienced drivers”.

Rinicella’s performance and foresight in the Junior class

Valerio Rinicella did not make any mistakes in Germany. With excellent concentration, he regularly came back up during the heats and gained 13 places in a difficult situation. He kept his calm in the Final despite some complicated first laps and fought until the last lap to come back in 12th position at the finish. His very rewarding fourth place in the Championship is a just reward for his efforts and a very encouraging sign for his debut in OK-Junior.

Maxwell Dodds also came back convincingly in the heats and made a great start in the Final, gaining another 12 places in four laps. After he had regained his competitiveness, his climb was unfortunately stopped by an electrical problem that caused him to retire on lap 7. For Giovanni Trentin, the problems multiplied in the heats and he wasn’t able to take part in the Final.

Wharton makes the most of the event in OK

James Wharton qualified for the Final after a retirement and another tough race in the heats. Determined as usual, he regained no less than 13 places in the first eight laps of the Final, but the end of the race was more complicated and a spoiler penalty relegated him to 26th position, far away from his true potential. Hugo Sasse started from very far back after the Qualifying Practice, but he regained ground consistently in the heats although was not able to reach the Final.

“Parolin is delighted to welcome a champion of the dimension of Lorenzo Travisanutto in his official team”, added Marco Parolin. “Lorenzo’s great experience will help to strengthen our project. His arrival was at the last minute, we didn’t have the time to prepare for the Wackersdorf race as we would have liked. His mission was essentially to get his bearings with us and start working towards the World Championship, the flagship event of the season. We are completely confident in his qualities and we will do everything we can to enable him to give the best in our team.”