Races follow one another and do not always look the same! Having just been crowned double European Champion the previous week in KZ and KZ2, the Birel ART brand was hoping to continue its momentum and finish its European campaign in OK and OK-Junior with a new major result. Alas, the hazards of the race decided otherwise. Several points of satisfaction remain for the official team of Lissone, such as the excellent performance of the Brazilian Matheus Morgatto, who came eighth in the final with a high level of performance. 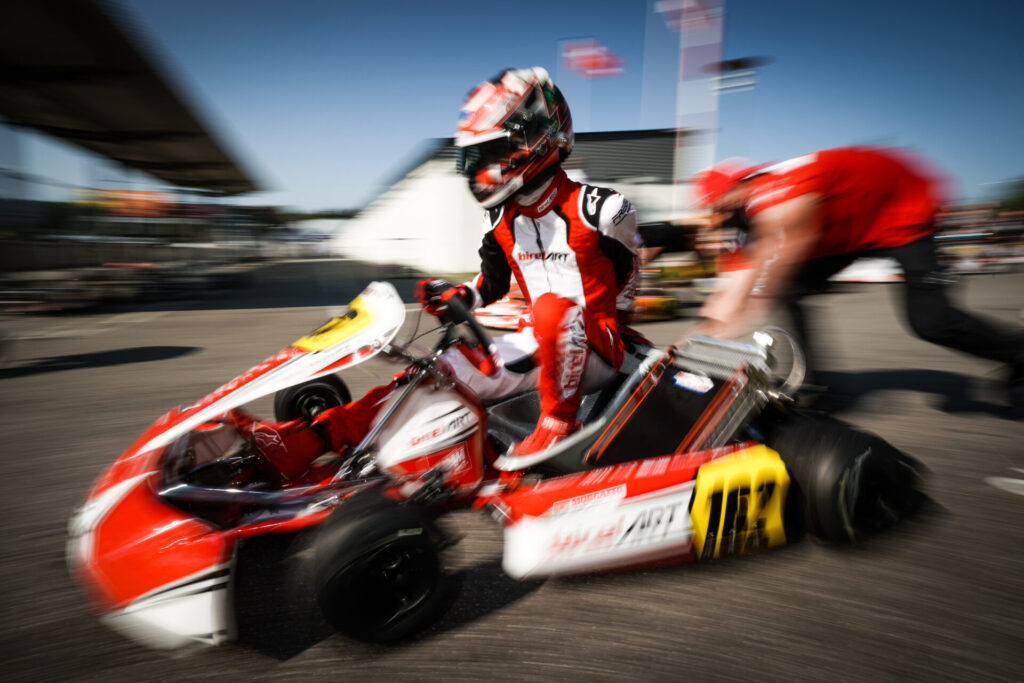 At each new competition, the Birel ART chassis continues to prove its worth whatever the category and type of tyres used. With a layout that is very different from the two previous circuits used for the FIA European Karting Championships in OK and OK-Junior (Zuera in Spain and Sarno in Italy), Wackersdorf gave the drivers a hard time and they had to work harder to improve during the meeting. All the technical staff of the official Birel ART team never stopped working to improve everything that could be improved, as explained by Luca Filini, the team manager of Birel ART Racing.

“Here in Germany, we have certainly had our ups and downs. Already in Free Practice, we have been able to place our drivers at the top of the ranking but not always consistently. The work on tyre optimization kept us very busy. It was the same for the Charles Leclerc by Lennox Racing team. In these conditions, the result of Timed Qualifying wasn’t as satisfying we expected and that complicated our weekend.”

Morgatto gets his best result in FIA Karting

In OK, Matheus Morgatto confirmed his competitiveness, showing that he is one of the most talented drivers in the category. Always close to the leaders, he scored an excellent result: 10th in Qualifying out of a total of 65 drivers, then fifth, fifth, sixth and ninth in the heats, the Brazilian finished the Final in eigth place, even though he was only 14th after a hectic first lap. This was Morgatto’s best result at this level.

He was one place ahead of another Birel ART/TM driver, the Dutchman Laurens Van Hoepen (Leclerc by Lennox Racing Team), who finished in the top 10 for the third time in three races. A little bit further back in the pack, both teams still had two drivers wheel in wheel: Oliver Gray, who moved up from 36th to 17th place, and Maya Weug, who gained five places in the Final. For her comeback in Europe after a long period of absence, Brazilian Julia Ayoub didn’t have an easy time at Wackersdorf, like Thai driver Thanapongpan Sutumno.

Intense duels for Bertuca in the heart of the pack

In OK-Junior, Christian Bertuca set the fifth-fastest time of his group, just in front of the RK chassis of Tymoteusz Kucharczyk, whereas the Peruvian Rafael Modonese was in the top 10 with his Birel ART/TM from the Leclerc by Lennox Racing Team. Unfortunately, numerous incidents then took place for the Italian team, even though there were three brilliant fourth places for Bertuca in the Qualifying Heats and a third for Kucharczyk on Sunday morning. Although Czech driver Adam Kowalski’s race stopped at this stage, Bertuca had a good start in the Final. However, the Italian lost a few places to finish in 20th place. There success for Kucharczyk, only 29th because of a 10-second penalty.

Back in Italy, the Birel ART team will now head to Lonato for the final of the WSK Euro Series, followed by the much-awaited KZ World Championship, along with the KZ2 International Super Cup.