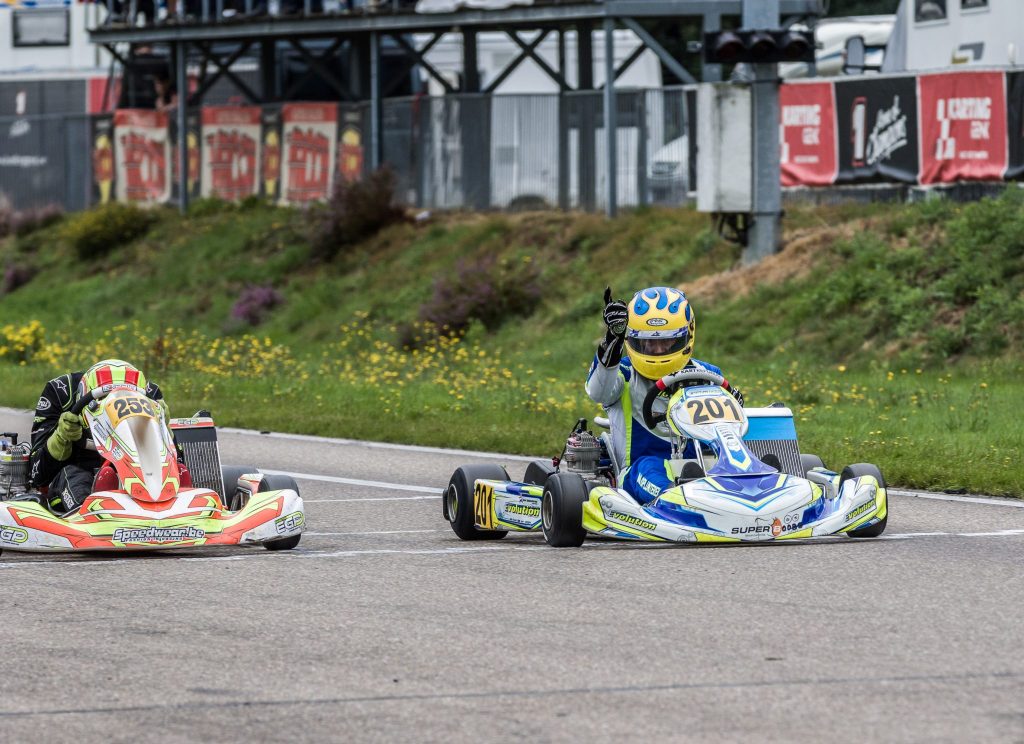 The 153 drivers who gathered to Genk for the fourth and penultimate round of the IAME Series Benelux faced rather difficult weather. The rain was ubiquitous at the beginning of the weekend before calming – for certain categories – during Qualifying. On Sunday afternoon, at the time of the Finals, the sky remained merciful and most of the races unfolded on a dry track. In addition to the title fights, this event was particularly important since the provisional situation of the championship allowed for the attribution of the invitations for the IAME International Final taking place mid-October in Mans.

Extremely regular since the start of the season, Joey van Splunteren had not won a final race in 2019 yet. The defending X30 Senior Champion (14-30 years old) filled this gap by winning the sprint for 22/1000 of a second to Tuur Stalmans! The Dutchman is practically titled before entering the final round of the season in Mariembourg. Behind this duo that ensured maximum suspense, Matteo Raspatelli offered himself the smallest step of the podium … and thus preserved a very small chance to overtake van Splunteren at the end of the season. The Dutch Nick Smit and Beau Heijmans finished in the Top 5. The latter was ahead of the Rookie Sam Balota while Enzo Lévêque had a weekend to forget.

Already undefeated at Francorchamps, Gil Mertens confirmed that his dominance in the Ardennes was not due to chance in X30 Super Shifter (175cc with gearbox). For his second appearance in the IAME Series Benelux, the driver from Aalst has once again flown over the debates in Limburg with a clear run: pole position, victory in both Qualifying heats and wide success in the Final. Behind him, the title candidates fought hard. Second after the heats, Christof Huibers slipped to eighth place in the Final and so the Estonian Sten Dorian Piirimagi, the reigning champion and competition leader, made the best move. Champion in 2017, the Dutchman Roy Bakker eventually found the way to the podium ahead of Ronan Waelbrouck and Frédéric Op de Beeck.

Was the championship already settled in the Qualifying practice in X30 Master (+25 years or +75 kg)? It is obviously too early to say! But by not starting early in the session, Fabio Kieltyka was surprised by a sudden rainfall and had to settle for a distant 16th place. Meanwhile, his rival Hubert Bauthier did not miss his chance! Not only did he take the Pole position but he also dominated the Qualifying heats. In the Final, he narrowly resisted (for 76/1000 of a second!) British Patrick Pearce to score the maximum points this weekend. The Dutchman Jim Ringelberg created a little surprise stepping on the podium. Sixth after the Qualifying heats, Fabio Kieltyka made up for his difficult weekend start with a 4th place in the Final ahead of Justin Bonnes. Ninth, Alain Bazard was once again the best Gentleman (+45 years old). In the championship, everything is revived: only five points split Fabio Kieltyka and Hubert Bauthier before the last meeting, scheduled from November 1 to 3 in Mariembourg!

With changing weather conditions, the X30 Junior category (12-15 years) offered many twists this weekend in Genk. Scottish champion Cian Shields was the fastest in Qualifying but the Brit Zach Ripley took the lead in the Qualifying heats. From the first lap of a Finale run on an almost dry track, a very incisive Yani Stevenheydens took over and won against Zach Ripley. Germany’s Herolind Nuredini completed the podium ahead of Poland’s Victor Obarzanek and Belgium’s Lucas Taelman and Noah Maton.

Only 12th in the Final, Cian Shields remains in the lead of the championship but the gap has narrowed with Zach Ripley. Unless a huge surprise, the crown will be contested between these two during the last round.

Poleman in X30 Cadet (10-13 years old) and leader after the Qualifying heats, the Dutchman Milan Kok quickly pulled away at the start of the Final. But from mid-race, the leader of the championship saw the return of Kimmy Abraham who reduced a gap of almost three seconds to take the lead two laps before the finish. This second success of the young Ittrois (after Ostricourt) does not prevent the regular Milan Kok to be virtually assured of the crown before the last meeting of the season. Behind them, Simon Lacroix took the third place of the day at the expense of Rayhan Mouoya, who slipped to 3rd place in the provisional ranking.

Author of the Pole position and winner of his first qualifying round, the championship leader Sacha van ‘t Pad Bosch confirmed his dominance in the Mini category (7-11 years). But a collision in the second round put everything in question! The French Clément Outran and Maxens Verbrugge scored the maximum points in the intermediate classification and won a place in the first row for the Final, with Sacha van ‘t Pad Bosch only 8th.

At the start on a track still wet, Clément Outran kept the advantage and drove towards his second season victory. The young Northerner took the opportunity to maintain his chances in the championship before the Final of Mariembourg. Only 10th on the grid, René Lammers had a great start and slipped to 2nd place, a place that the son of the 1988 Le Mans 24 Hours winner kept until the finish. While Sacha van ‘t Pad Bosh fell down to 13th place after an incident, Maxens Verbrugge climbed on the podium in front of the Dutchman Dylan Visser and Patrice Kowalewski.

It’s on the Karting des Fagnes of Mariembourg, from November 1st to 3rd, that will be held the fifth and final round of the IAME Series Benelux. See you there!

Translated from French by Guillaume Alvarez