After enjoying some time off during the summer break, VDK Racing was back in business last weekend for the Fourth Round of the IAME Series Benelux which unfolded on the Karting International of Genk, in eastern-Belgium, in rather tricky weather conditions! 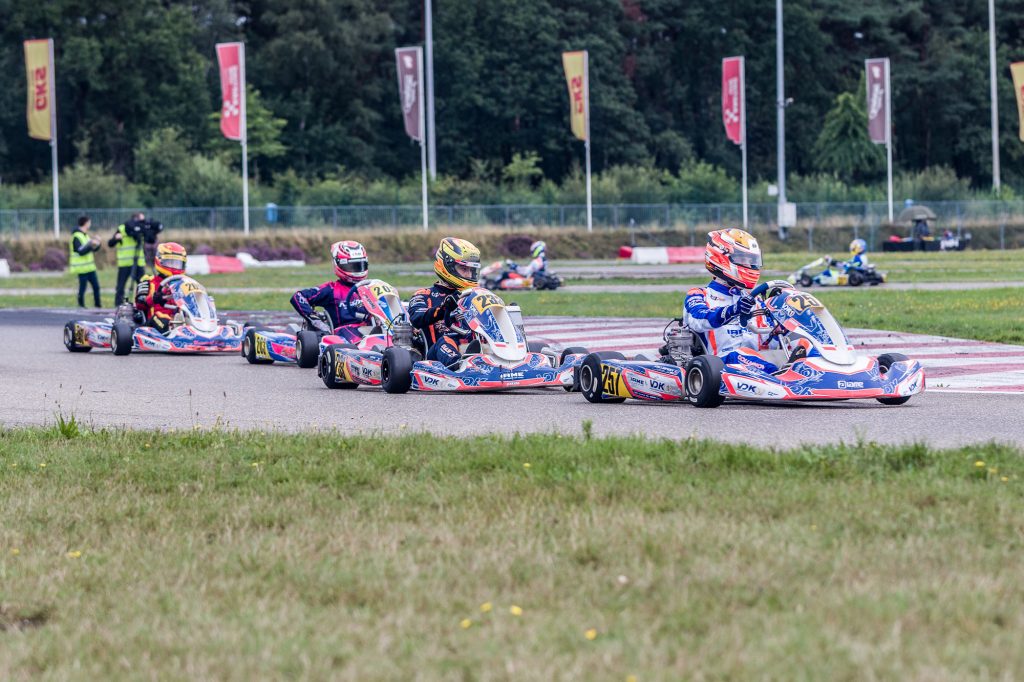 Holidays are now done for VDK Racing that kicked off its end-of-season marathon which will see the team compete in three different events over the next four weeks. The first stop was last weekend in Limburg as the 4th Round of the IAME Series Benelux took place at the “Home of Champions” where the Belgian squad entered 11 drivers in two (Junior, Senior) of the six X30 categories splitting the 153 names of the entry list. The weather turned out to be rather capricious above the Circuit of Genk with teams and drivers being forced to juggle the whole weekend with set-ups and tire choices to prevent any sudden changes.

In the Senior class, filled with 52 drivers, Elie Goldstein made the most of the changing conditions to gain momentum throughout the weekend. After a Qualifying disturbed by the rain (34th fastest time), the young Belgian started his heats from the second part of the grid but nevertheless made his way through the field and finished twice in eight position and once in 11th. Qualified 17th on the Final’s grid, Elie overtook ten rivals and crossed the checkered flag in seventh place with the fastest lap in the pocket!

Also penalized by the tricky conditions during his Qualifying Series, Corentin Collignon put his experience to good use in his heats where he gained nearly thirty positions and finished twice within the Top 10 and once in 15th place. 21st on the grid on Sunday afternoon, the Frenchman kept a strong pace and climbed up to tenth place with enough points to remain third in the drivers’ standings before the championship conclusion at Mariembourg, in early November.

Among the other VDK Racing drivers in the Senior category, Bastien Cochet emerged as one of the fastest in the field. Due to start his Qualifying heats from the last grid rows – the consequence of a Qualifying session made complicated by a tricky track – he didn’t spare himself overtaking his rivals on his way to the Top 10 that he entered on one occasion. It was enough for him to qualify for the Final where he again drove strongly from 24th to a 15th place being his best season result!

For his first appearance in this year’s Belgian Championship, Franck Chappard made up for a difficult Qualifying (15th in his Series because of the rain) by taking a fifth and a seventh place in his heats. The Frenchman concluded his run with a 17th place in the Final, one rank ahead of Xavier Dias whose weekend didn’t meet his initial expectations despite a strong pace against the stopwatch (8th). Back in the Competition organized by IAME Belgium for the first time since its kick-off in Mariembourg, Manon Augier constantly showed progress and motivation on track but eventually missed her qualification to the Final for 11 points. Indisposed on Friday due to illness, Oliver Goethe will be back on track and in top form for the next competition of the team, this weekend in Finland!

Four young drivers defended the VDK Racing colors in the 37 participant-Junior class at Genk. Taking the 17th-fastest lap time of his Qualifying Series, Hugo Besson showed good skills in race mode where he reached the Top 10 in one of his two Heats followed by a 20th position in the Final. For their first competition with the team, Lazare Lartigau and Sami Dhahri both qualified for the Final where their numerous efforts throughout the weekend were not eventually rewarded, as for Olivan Fayt who didn’t cross the finish line.

While the Belgian Championship is taking a break before its conclusion on the Karting des Fagnes of Mariembourg from 1st to 3rd November, VDK Racing won’t have much time to spare as they head for Aläharma next weekend to take part in the Open National Karting Race in preparation for the most-awaited event of the season: the FIA Karting World Championship – OK/Junior on September 7th and 8th where the Belgian squad will seek to retain its Junior title of 2018!