The stage for the last act of the FIA Karting European Championships – OK/Junior was set during the twenty Qualifying Heats that took place on the selective circuit of Wackersdorf, in Germany. Qualifying will continue on Sunday morning, but Antonelli in OK and Ugochukwu in Junior are in a favorable position with their solid runs after a long race day. 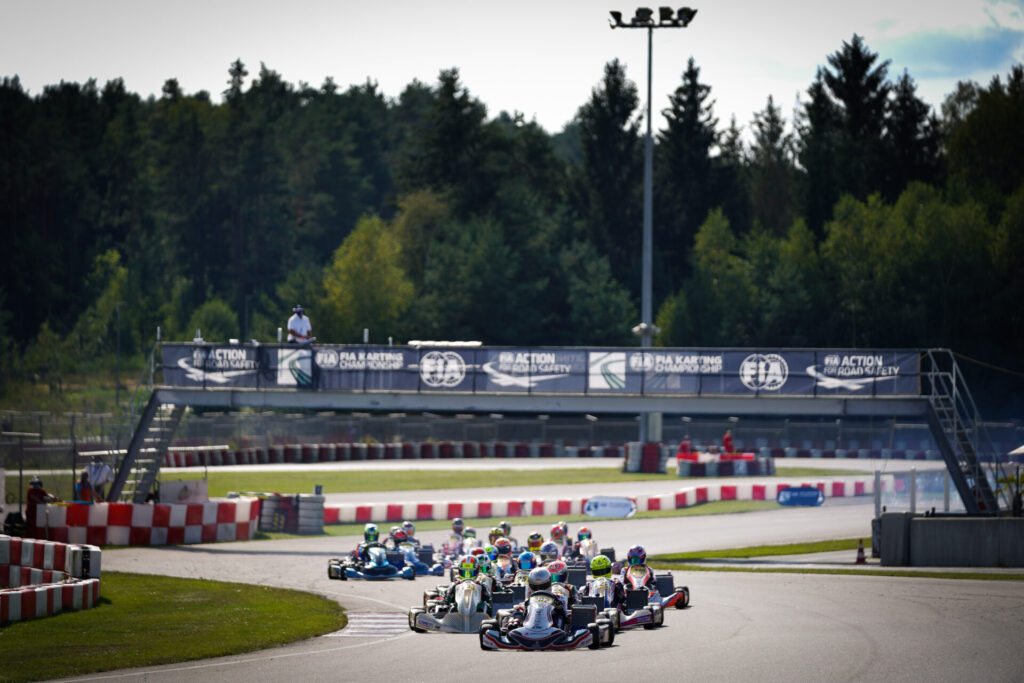 Saturday, 12th September, was accompanied by very pleasant weather in Bavaria, with blue skies, sunshine and temperatures rising from 16 to 26° C. Although braking on the first hairpin after the start sometimes caused problems in the pack, the races were as exciting as they were well-behaved, punctuated by numerous battles and constant overtaking at all levels.

With its winding and technical layout, very different from the first two European competitions, the German circuit contributed to the emergence of new names that were well placed in the result sheets. Several top drivers remained in the running, but there were also some disappointing performances. Of course, we will have to wait for the last five qualifying heats on Sunday morning to see the definitive list of finalists, but the provisional results from Saturday still give interesting indications of the contenders for the two European titles.

Poleman Andrea Kimi Antonelli (KR/IAME) leads Saturday night with two wins and a second-place finish. He is catching up with the Championship leader even before the Final. Taylor Barnard (KR/IAME) remains slightly behind for the moment and a penalty for an incorrectly positioned front fairing cost him 10 places in his last race. Joe Turney (Tony Kart/Vortex) is one of the only top drivers to have already completed all four heats. He will be watching from the side of the track on Sunday as he prepares to make his way to the grid for the final race.

Nikita Bedrin (Tony Kart/Vortex), who was penalized for overtaking under a yellow flag, greatly reduced the benefit of his two wins and lost valuable ground in the title race. Rafael Chaves Camara (Exprit/TM), Luigi Coluccio (Kosmic/Vortex) and Norton Andreasson (Tony Kart/Vortex) were among the top performers of the day and are expected to play a role in the Final.

Leader in the provisional standings of the FIA Karting European Championship – Junior, the American Ugochukwu (KR/IAME) took four victories on Saturday, which gives him a score advantage and at the same time reinforces his confidence in his performances. Arvid Lindblad (KR/IAME) is currently his closest opponent in the title race, while Tuukka Taponen (Tony Kart/Vortex) has so far proved to be significantly less competitive than in the two previous competitions.

Valerio Rinicella (Parolin/TM) has also had not very encouraging results, which could mean that Brando Badoer (KR/IAME) could be in the running for the Championship podium, especially as Freddie Slater (Kosmic/Vortex) is far from having made up the ground he lost in Qualifying Practice. With three victories to his name, the British driver Harley Keeble (Tony Kart/Vortex) is in an advantageous position at this stage for the Final, as is his compatriot Aiden Neate (Tony Kart/Vortex), a regular in the top three. Both drivers took advantage of the Wackersdorf track to put themselves ahead at the expense of several favorites.

Drivers will be back on track on Sunday from 08:00 for their respective Warm-up sessions, followed by the closing Qualifying Heats and Finals.

A live page is at your disposal from Friday to Sunday, including live timing and live streaming (on Saturday and Sunday). Reports and results will be published on this website on a daily base.