The 2019 racing season by WSK Promotion came to a close this Sunday on the Adria International Raceway where the Final Cup crowned its winners. Pedro Hiltbrand (OK), Andrea Kimi Antonelli (OKJ), Dmitry Matveev (60 Mini) and Douglas Lundberg (KZ2) clinched victory at the end of exciting Finals! 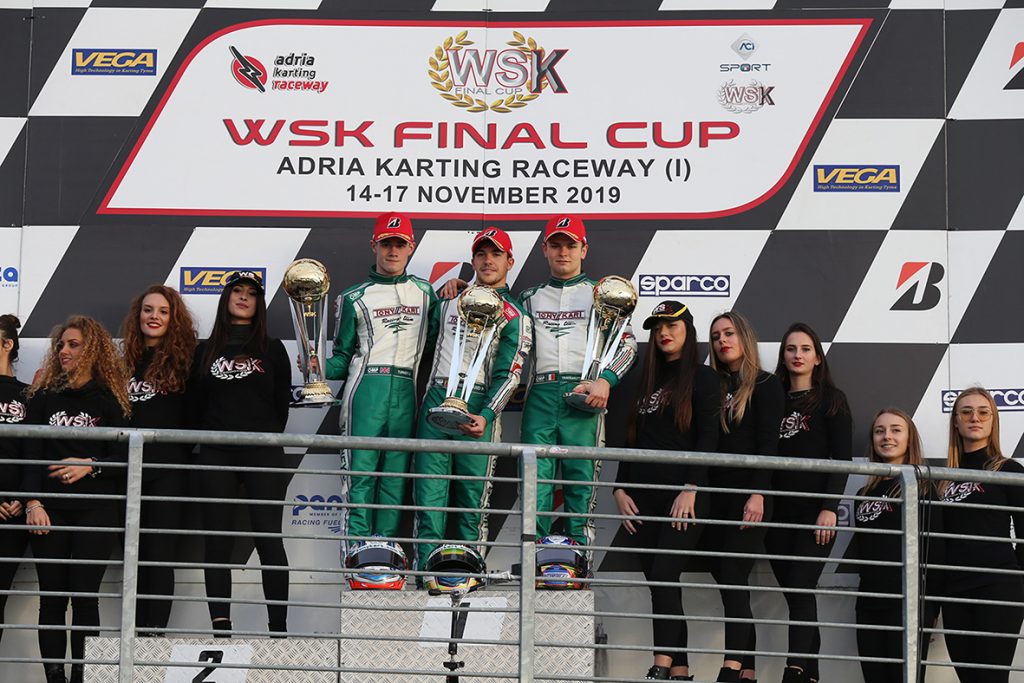 The extremely changeable weather created lots of troubles for the drivers taking part in the WSK Final Cup at the Adria International Raceway. Pouring heavily in the morning, the rain gave a truce in the afternoon, allowing the track to dry out for the final showdown of the 14th season promoted by WSK.

OK: Hiltbrand back on the highest step of the podium

Nikita Bedrin (Tony Kart/Vortex) managed to stay ahead of Andrea Kimi Antonelli (KR/IAME) during the first laps of the OK-Junior Final before the young Italian, winner in Prefinal A, took over the leadership and pulled away. Behind Bedrin, Tymoteusz Kucharckzyk (Parolin/TM) ended up in third position after recovering from seventh, his last move on Ugo Ugochuckwu (FA Kart/Vortex) happening in the closing laps. Robert De Haan (Energy/TM), winner of the Prefinal B, didn’t take part in the victory battle after losing ground at the start. He nevertheless recovered up to sixth place.

60 Mini: Dmitry Matveev takes it all

Dmitry Matveev (Energy/TM) remained only one lap behind his countryman Anatoly Khavalkin (Parolin/TM), the leader at the start of the 60 Mini Final, after having won the Prefinal A. Matveev quickly overtook him and then cruised towards victory. Great race for another Russian, Maksimilian Popov (Parolin/TM), who started from the 10th row and scored a final third place. Not so lucky was the driver from the Emirates, Rashid Al Dhaheri (Parolin/TM) winner of the Prefinal B but only 14th in the Final.

Douglas Lundberg (Luxor/TM) waited until the halfway point of the KZ2 Final to grab the leadership from Jean Nomblot (Sodikart/TM) and Lorenzo Giannoni (Sodikart/TM). The Swede went on to win the race ahead of Leonardo Bizzotto (Formula K/TM) and Harry Thompson (KR/IAME) who both managed to recover from the back end of the field where the Italian had dropped after a tricky race opening while the Brit had started from the last row. Winner of the Prefinal, Matteo Zanchi (GP/TM) fell down the order to sixth place.

The Final Cup was the conclusion of the 2019 international racing season by WSK Promotion. The first event scheduled in 2020, the WSK Champions Cup, will again take place in Adria on January 20th.